Just before midnight on Saturday night, people in northern Florida were treated to a surprising bright light in the sky that turned out to be a meteor.

‘Did you see it? A meteor was caught on GOES Lightning Mapper (GLM) around 3:52Z or 11:52 PM ET!’ confirmed the National Weather Service out of Tallahassee on Twitter.

The meteor’s flash was captured on the Geostationary Lightning Mapper, a satellite taking hundreds of images per second to map lightning storms, according to CNN. 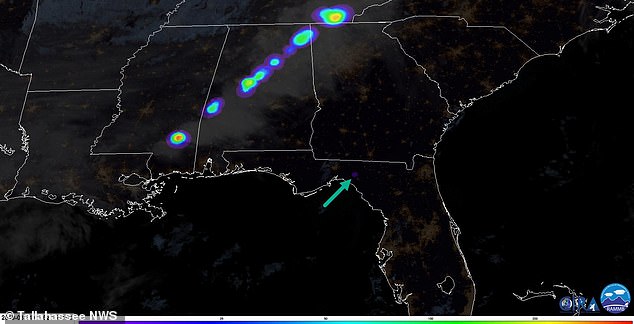 The National Weather Service in Tallahassee, Florida, tweeted the GLM imagery tracking lightning storms that caught a quick blip of the meteor over the state pointed out by the small green arrow in the frame 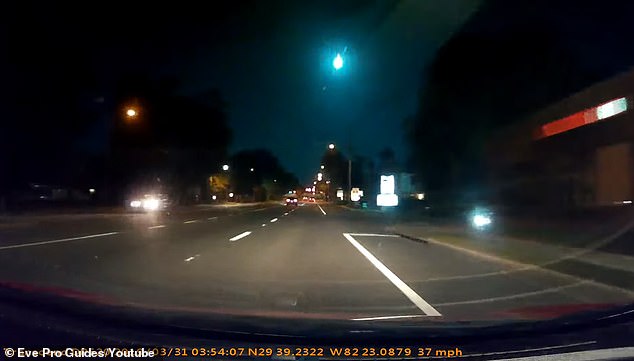 Just 20 seconds into this YouTube video posted by Eve Pro Guides, a ball of light appears 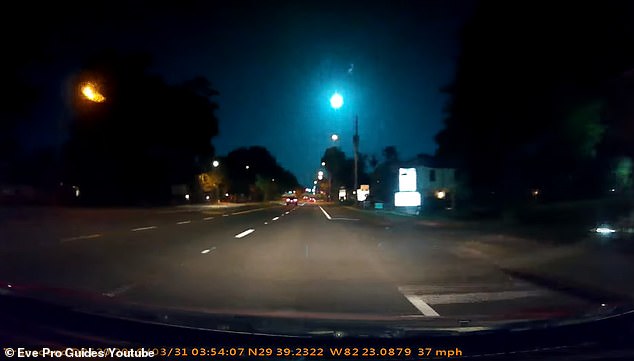 The YouTube user noted that the dashcam footage was not normally what he would post to his channel, but he thought it was ‘something pretty crazy’

‘Meteors coming into the Earth’s atmosphere happen fairly often but we don’t always get to see them,’ said CNN meteorologist Haley Brink.

‘Nowadays we have so many satellites in space and cameras on the ground that these events are becoming more and more visible to the general public.’

‘This isn’t normally what I post on my channel, but tonight I was out on my way home, and I saw something pretty crazy,’ said a user who runs EVE Pro Guides – EVE Online PVP and ISK Guides YouTube channel. ‘Luckily my dashcam caught it, so I’ll let you watch right here.’ 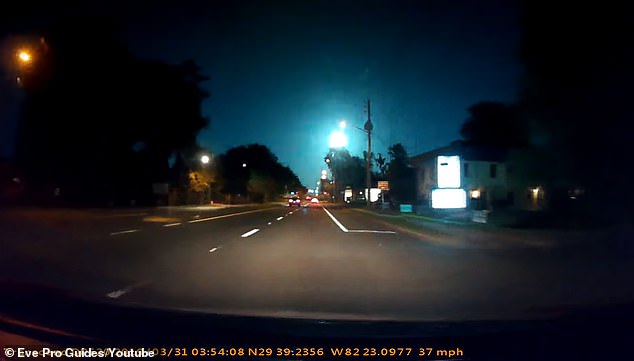 At about 19 seconds into the video posted on the video game guide channel, a glowing blue-ish orb enters the frame the top of the screen. It then flares even more brightly before disappearing over the horizon.

Twitter user Jeffrey Cardona who captured the glowing space rock on his dash cam captioned his video ‘Can Somebody Explain This!’ while tagging numerous news organizations and hashtags referring to meteors, UFO’s and Area 51.

Cardona exclaims ‘dude, did you see that!’ from inside his vehicle as other voices can be heard saying ‘what?’ and ‘yeah!’

It is uncertain if the meteor was able to reach the ground without burning up, but the National Weather Service said there were unconfirmed reports of a landing near Perry, Florida, about southeast of Tallahassee.

Covid tier system could be ditched in favour of nationwide rules, PM hints