Britain’s jobs hotspots: The countryside gets left behind as numbers on payroll soar by more than 10 PER CENT in some urban areas – but how has your town fared?

Britain is experiencing an uneven recovery from the economic strife caused by the Covid pandemic, new figures revealed today.

Provisional figures from the Office for National Statistics show that the number of payrolled employees in January rose by 4.8 per cent – an increase of 1.35million over the previous January, when the UK was in full lockdown.

But some areas did better than others. The London boroughs of Westminster, Hackney and Tower Hamlets in London, and Manchester, all experienced payroll growth of more than 10 per cent.

However, a way from major urban centres the payroll growth was sluggish and behind the average, including in broad swathes of Scotland and shire England.

Below you can see how well your local area is faring. 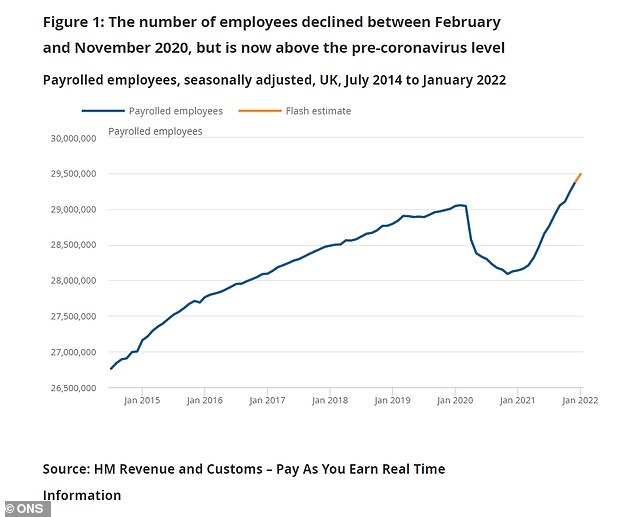 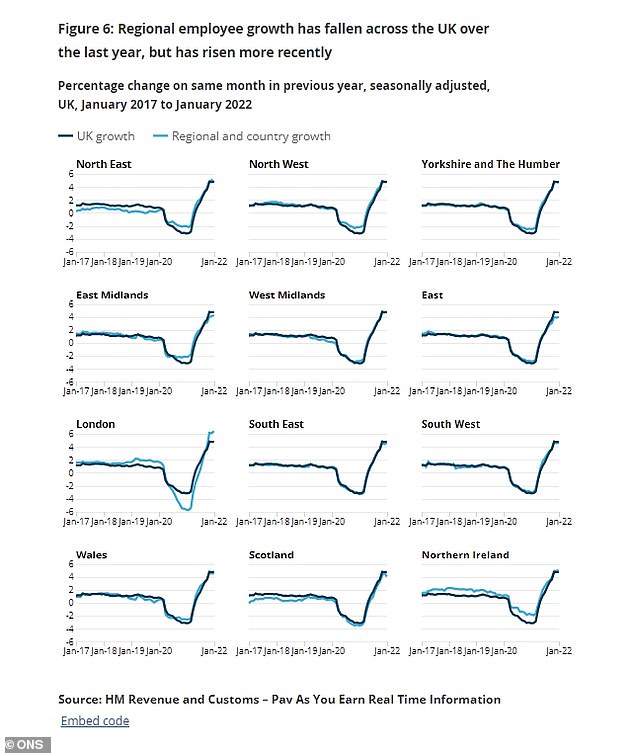 The ONS report stated: ‘Over the course of the coronavirus pandemic, all regions’ growth rates followed a similar pattern. This was rapidly declining and becoming negative since April 2020, but beginning to improve again in recent months. However, the magnitude of changes varies.

‘Some sectors show similar growth rates to the region level, while others, such as accommodation and food service activities and transportation and storage, show moderate regional variation.

For transportation and storage, employee growth has been very different across regions. The East Midlands has experienced sustained positive growth, while London and the North West have experienced continued negative growth since April 2020.

It comes as firms have warned workers are demanding double-digit pay rises – as figures showed a lucky few are already seeing wages rise more than 10 per cent despite a brutal inflation squeeze for millions of families.

The strain on the labour market was underlined on Tuesday with official data revealing vacancies hit 1,298,400 in the three months to January, while payroll numbers reached 29.5million – both record highs.

Businesses say the scramble for staff is forcing them to offer higher salaries, and provisional indicators suggest some services workers have seen incomes go up 10.6 per cent in the past year.

Across the economy, average pay including bonuses was up 4.3 per cent in October-December, while regular pay was up 3.7 per cent.

Accounting for inflation – which is running near a 30-year-high – that still meant incomes fell by 0.1 per for total pay, and 0.8 per cent for regular pay.

But more recent payroll figures from January suggest median monthly pay was 6.3 per cent higher than the same month last year – and considerably higher in some areas.

Despite the huge cost-of-living pressure on millions of households, the sharp hikes will fuel concerns about inflation becoming embedded in the economy, after the Bank of England appealed for the public to shun big increases.

It expects the CPI measure of prices to top 7 per cent by April – when energy bills and national insurance are due to rise.