British businesses are increasingly confident of bouncing back this year, with levels of optimism higher than their global counterparts, according to a new survey.

UK firms are more likely to expect a rebound in activity in the coming months than their competitors around the world and expectations of a spike in growth are now stronger than at any point since 2015.

The global poll of 12,000 manufacturers and services providers, conducted three times a year for consultants Accenture by data company IHS Markit, showed 68 per cent of British firms expected activity to rise, while 11 per cent expected a fall.

The net balance of plus 57 per cent is the highest level recorded since June 2015 and up from plus 34 per cent in October. The growing optimism comes as the Government’s vaccination drive continues to exceed expectations.

The level recorded in the UK is also higher than the levels recorded for businesses in the United States, Japan and continental Europe.

The survey findings came as Bank of England governor Andrew Bailey said he is now ‘more positive’ about the UK’s economic prospects and played down fears over surging inflation.

Mr Bailey said he expects pandemic ‘habits’ such as working from home to stay, with people having a ‘hybrid’ lifestyle rather than fully returning to offices.

In an interview on BBC Radio 4’s Today programme, Mr Bailey pointed to the huge savings ‘warchest’ built up by consumers who had been unable to spend as usual over the past year – saying it could help drive a bounce back.

He also tried to quell anxiety about the threat of sharp spike in inflation, after huge government spending and the $1.9trillion US stimulus package.

He suggested that increases in costs could ‘pick up reasonably quickly’ towards the Bank’s two per cent target over the next couple of months but his concern was still more about whether the rise will be ‘sustainable’. 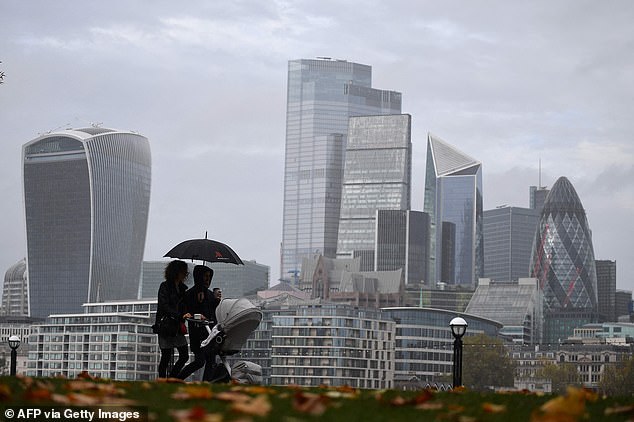 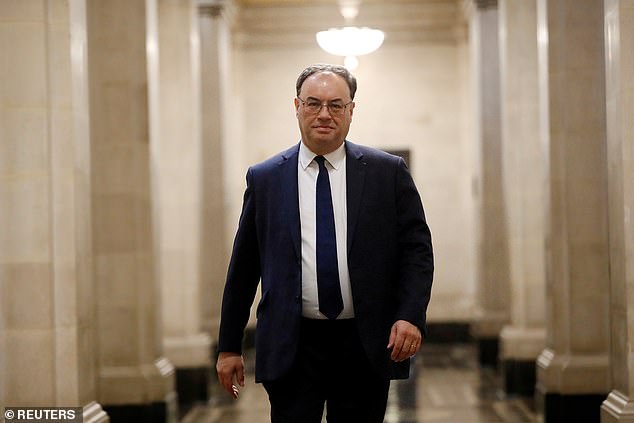 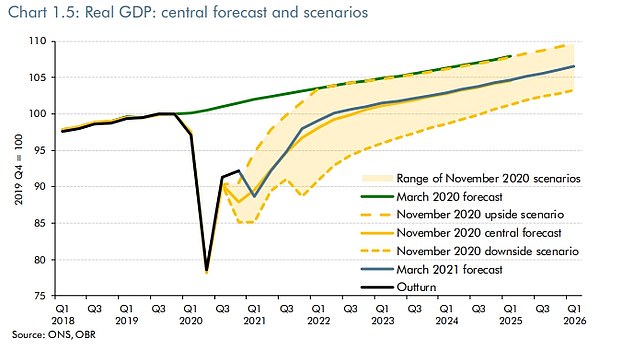 Mr Bailey said the economy should get back to its late 2019 level around the end of this year. This chart shows the OBR’s forecast for GDP

The UK economy shrank by almost 10 per cent last year but many businesses are optimistic of an uptick in trade in the coming months.

Accenture consultant Rachel Barton said: ‘After a tough year it is encouraging to see business confidence bouncing back.’

The strongest improvement in optimism in the survey – conducted from February 11-25 – was in the hotels and restaurant sector which has been hardest hit by the crisis.

Asked this morning about the outlook for the UK, Mr Bailey highlighted the scale of the hit inflicted by coronavirus lockdowns.

But he said: ‘I’m now more positive but with a large dose of caution.’

He added that it was possible the situation will end up being better than some were predicting. ‘There are now risks on the upside,’ he said.

Mr Bailey said the economy should get back to its late 2019 level around the end of this year, and highlighted the estimated £150billion Britons have saved during the crisis.

‘There has been a very large build-up in saving in the economy,’ he said. ‘The question of course then is: to what use will those savings be put?’

Mr Bailey was grilled on the rise in interest rates on government debt – with the UK’s debt mountain surging towards £2.8trillion.

The yield on 10-year British government debt is today trading close to its highest level since last March, when rates plunged as panicking investors sought a safe haven.

Government bond yields have been going up globally as vaccines raise hopes for recovery and the US fiscal stimulus drives demand.

But Mr Bailey indicated he was not overly concerned about the shift.

‘We have seen some increase in interest rates over the last month or so, as have other countries. My assessment so far is that that is consistent, I think, with the change in the economic outlook,’ he said.

The Bank is expected to keep interest rates at their historic low of 0.1 per cent and its bond-buying programme steady at £895billion on Thursday at the end of its March meeting.

However, despite sounding a more optimistic note, Mr Bailey warned there is little chance the UK will return to the pre-pandemic ‘normal’. 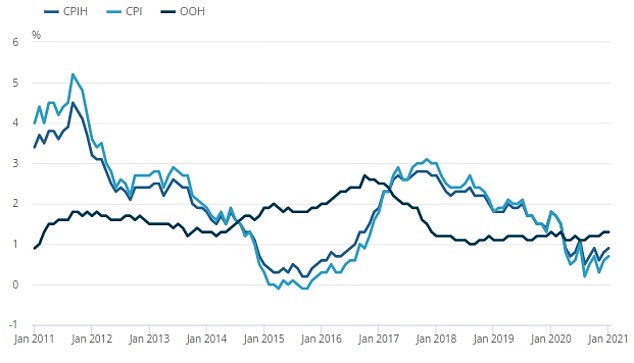 Mr Bailey played down concerns over inflation, with the level still well below the Bank’s 2 per cent target

He said most workers will adopt a hybrid approach to their jobs when restrictions ease.

‘I think we will see things change, because I think some habits and some practices will prove to be sustainable,’ Mr Bailey said.

‘I think there will be for many people more of a hybrid model of working at home and working in a place of work.

‘I think we’ve already seen the retailing industry change quite dramatically in the last year and although I would expect some of it to change back it, it won’t entirely change back.

‘I would be very surprised if we went back to exactly as we were before Covid.’

Jeffrey Epstein thought Prince Andrew was a ‘hapless sap’ who was easy to recruit as a bait, royal’s cousin claims – The Sun