British fashion industry pays tribute to the Queen: Brands including Burberry and Alexander McQueen take part in salute to the late monarch

The fashion industry has paid tribute to Queen Elizabeth in a special show at The Fashion Awards in salute to the late monarch.

On Monday night, the late monarch was celebrated in a section titled ‘the fashion salute show’, featuring British brands including Alexander McQueen, Burberry, and Christopher Kane.

Naomi Campbell presented a tribute to Queen Elizabeth on stage and models showcased works inspired by royalty on a circular catwalk in the centre of the Royal Albert Hall in London.

While the designs were paraded around the room, footage of the late monarch was shown on a large screen in the hall, while musicians in ceremonial uniforms performed.

The British Fashion Awards, one of the most anticipated moments of the global fashion calendar, celebrates fashion at the intersection of culture and is a global entertainment platform for brands, creatives, designers, artists and tastemakers who come together to celebrate the industry.

The special show came after London Fashion Week fell within the national period of mourning when Queen Elizabeth died on September 8. 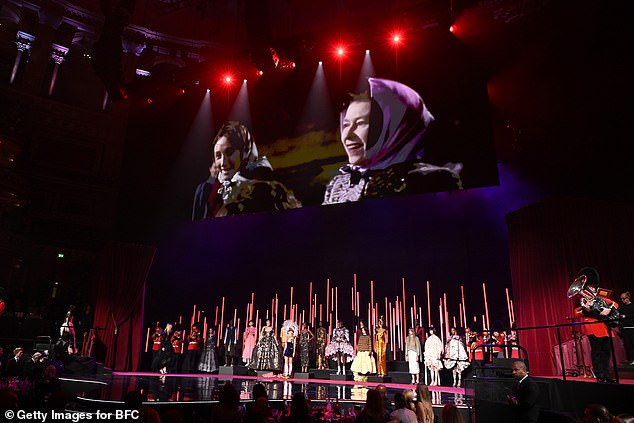 On Monday night, the late monarch was celebrated in a section titled ‘the fashion salute show’ 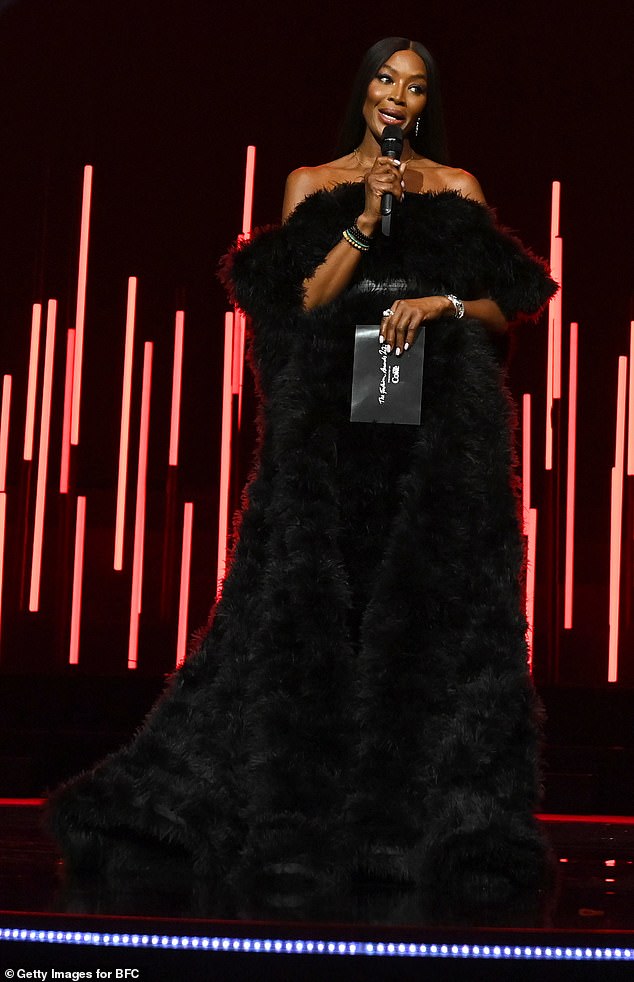 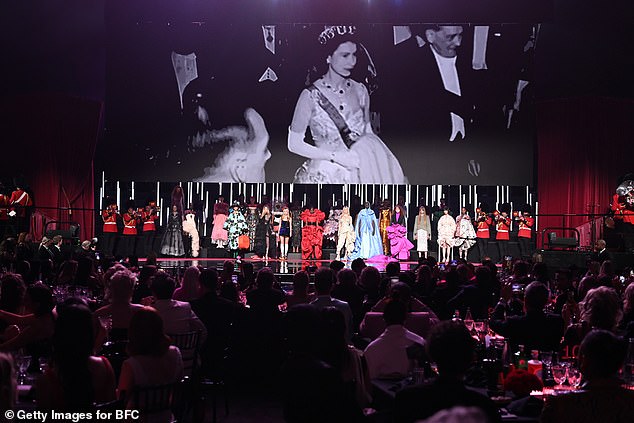 Models congregated on the stage as the audience looked on, with images of the late Queen shown on a large screen in the Royal Albert Hall 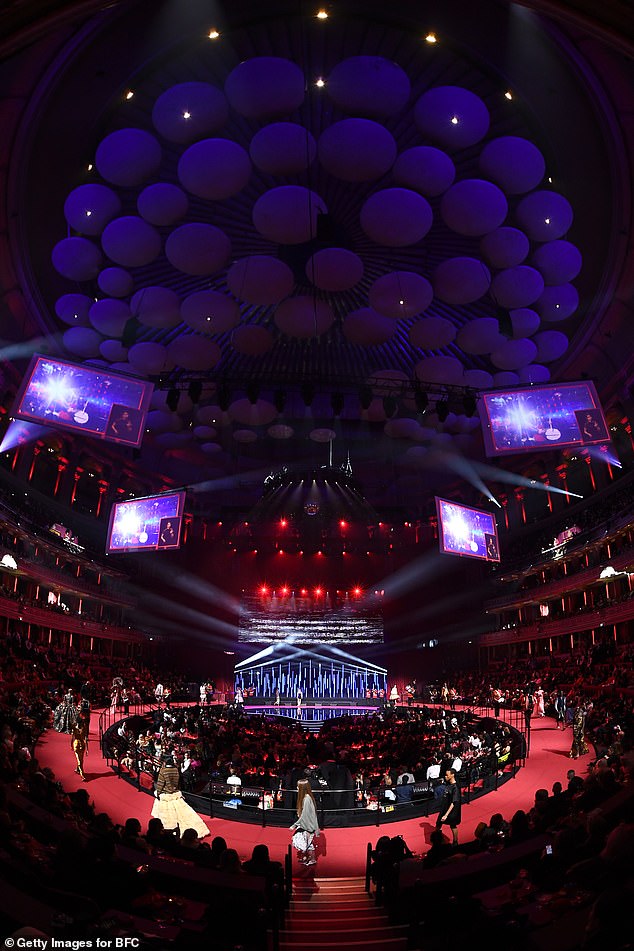 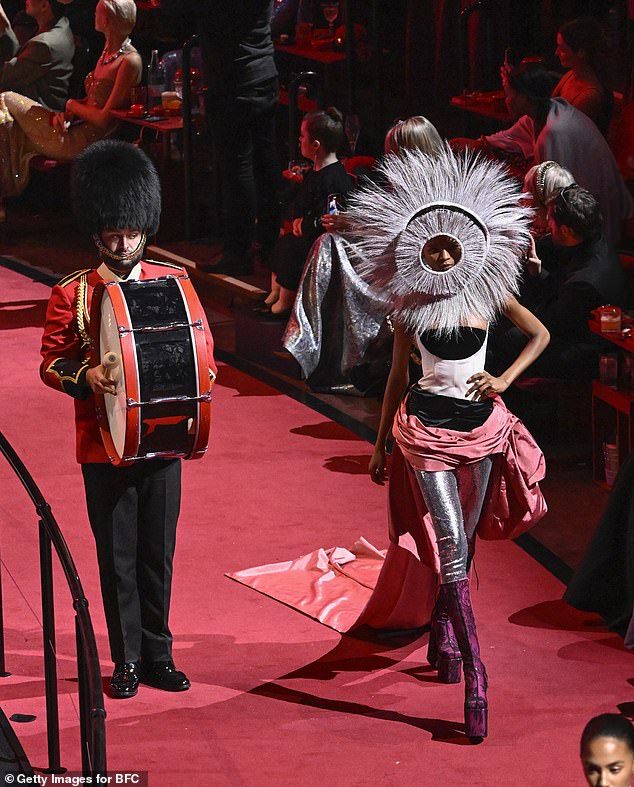 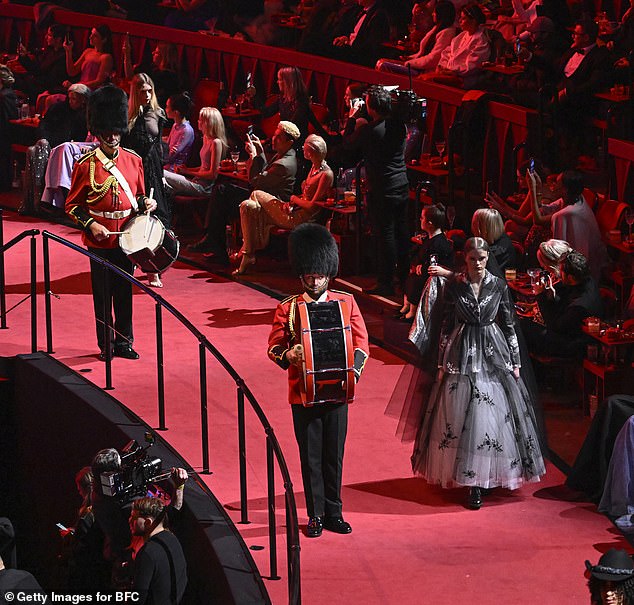 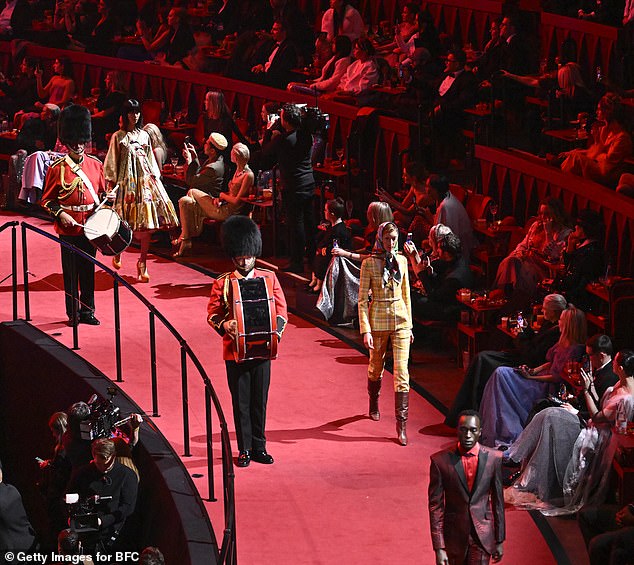 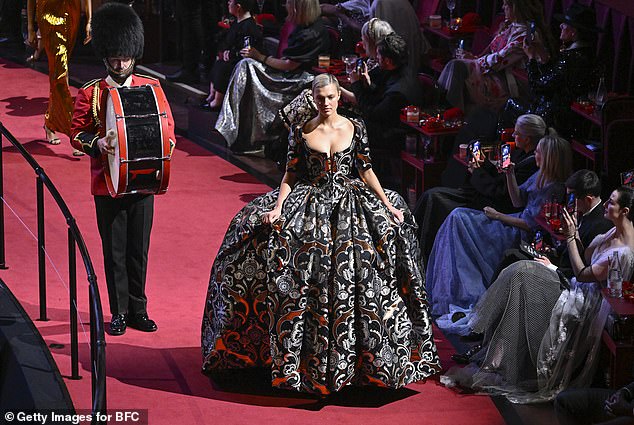 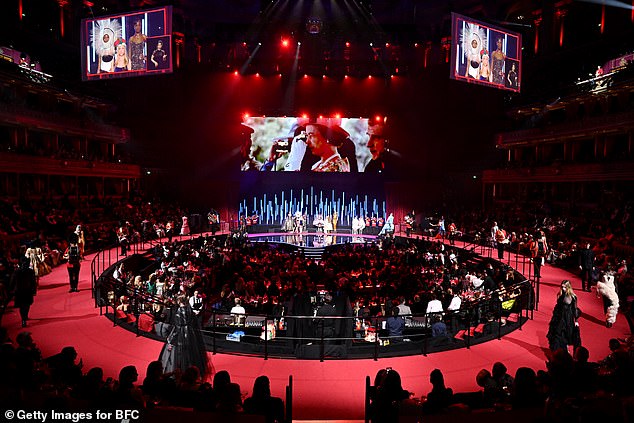 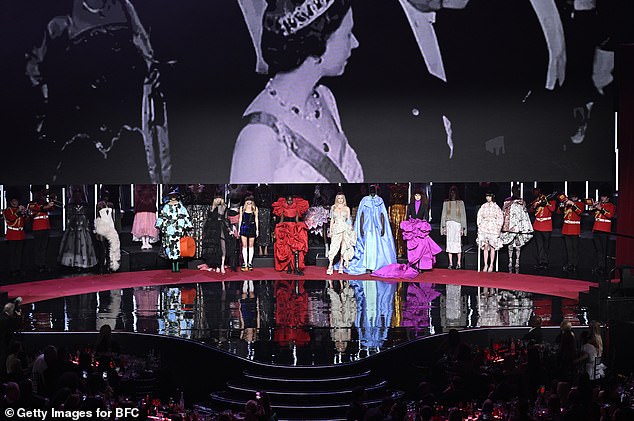 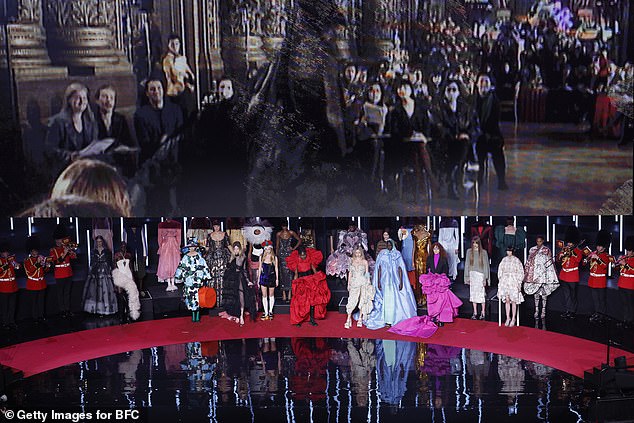 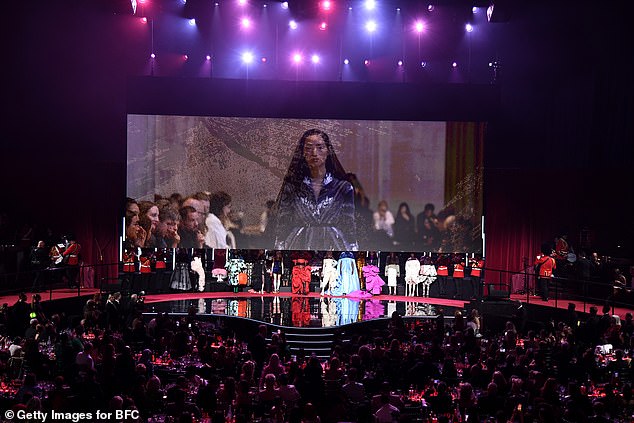 On Monday night, the late monarch was celebrated in a section titled ‘the fashion salute show’, featuring British brands including Alexander McQueen, Burberry, and Christopher Kane 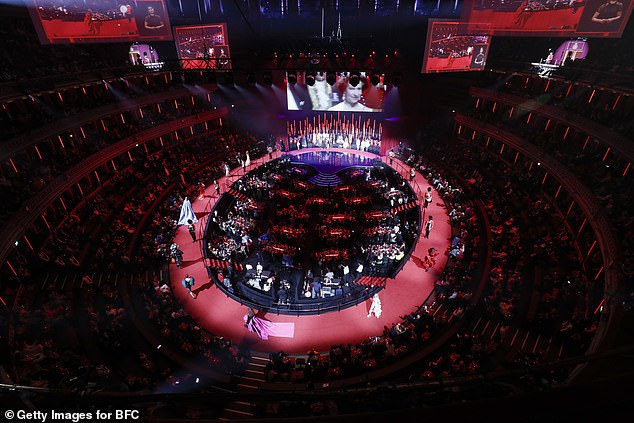 The annual event ran from September 15 to 20, with closing events that were planned for September 19, the day of the Queen’s state funeral, cancelled or postponed.

At the time, the British Fashion Council said that the week’s showcase should go ahead, but designers were asked to ‘respect the mood of the nation and period of national mourning by considering the timing of their image release’.

Some brands, including Burberry and Raf Simons, decided to cancel their September shows, while smaller fashion labels who could not afford to cancel paid tribute to the late monarch at the time.

Designer Harris Reed, whose clothes have been worn by Adele and Beyoncé, decided to continue with his show to support the economy.

‘It’s crucial that, when big shows are pulling out, us young designers stick together and make a statement with our clothing. We’re here, we’re together and we’re supporting the British economy in that way,’ he told the Independent at the time.

‘Thriving through difficult times was one of the late Queen’s trademarks,’ designer Mark Fast said at the time. His brand continued with its debut show during fashion week. 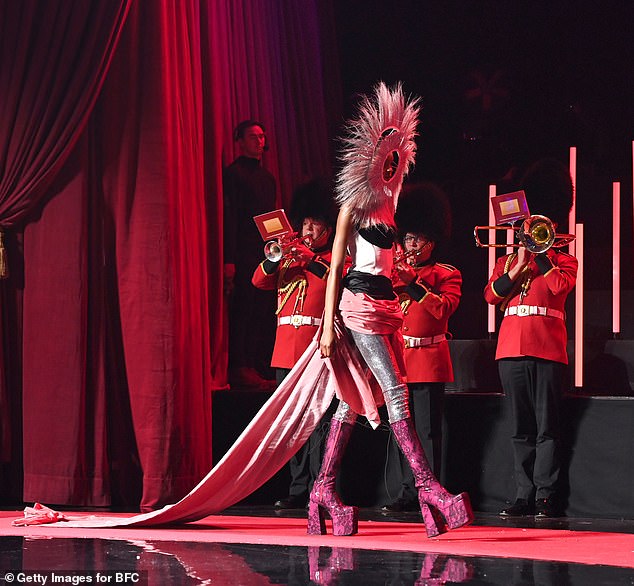 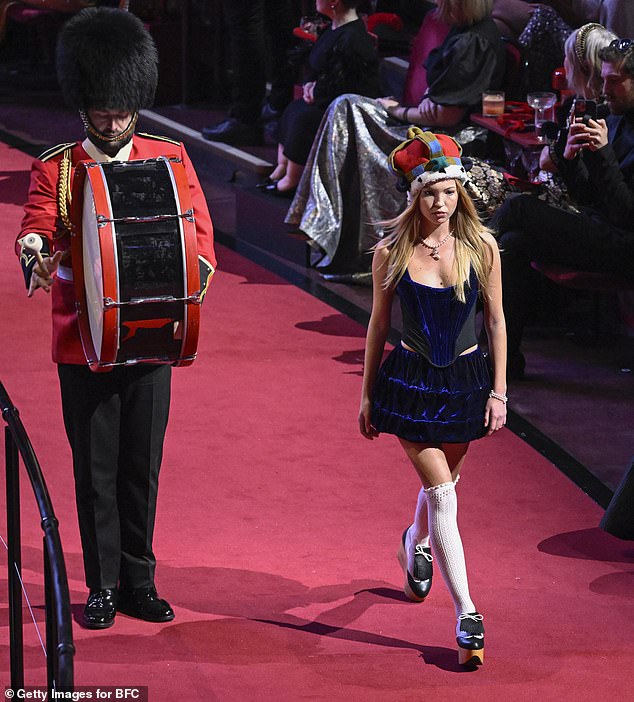 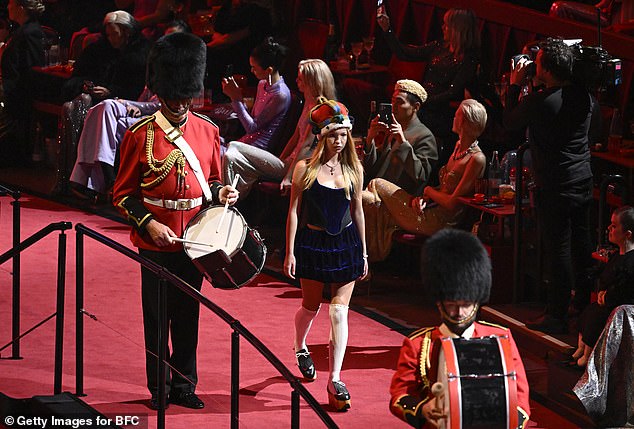 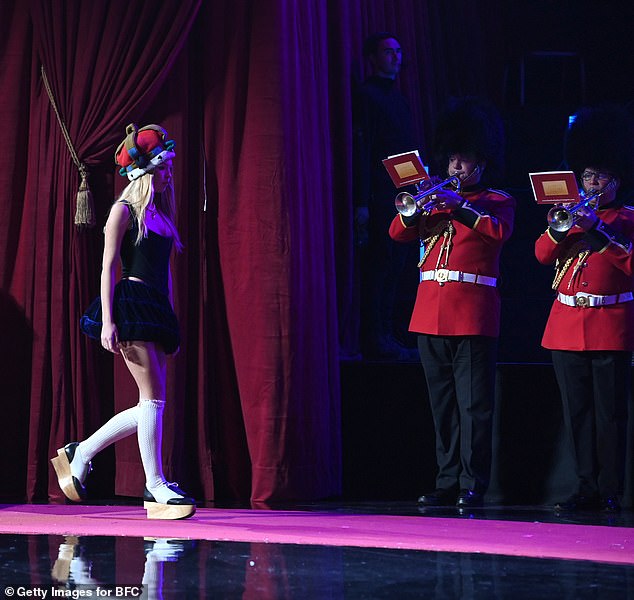 Designer Bora Aksu added: ‘There is so much hard work that goes into creating seasonal collections and I believe carrying on [and] showing our work will only help maintain the reputation of London being one of the major fashion capitals. I’m sure the Queen would have agreed and supported that.’

In 2018, the Queen sat next to Anna Wintour before presenting designer Richard Quinn with the first Queen Elizabeth II Award for British Design at London Fashion Week.

Mr Quinn’s show was due to be shown on Monday, September 19, but was moved to the following day so to not run on the same day as the late monarch’s funeral.

Designer of the Year: Pierpaolo Piccioli for Valentino

The 15 designers, brands, creatives, and individuals who created positive change within the fashion industry this past year under three categories: Environment, People and Creativity.

Recognises designers and brands who made a global impact in the past year through their creativity in design, campaigns, collaborations and firm business foundation as well as defined the shape of global fashion.

Celebrates those who have made a significant contribution towards reducing the environmental impact of our industry to create positive change. They are the leaders and are setting the bar by exploring new business models, design principles, production processes, consumption, and disposal.

Recognises those who have led change by encouraging equal, diverse, empowered workforces from head office to supply chain and shop floor. It focuses on the impact fashion has on communities.

Dominique Crenn Wins Third Michelin Star, a First for a Woman in America