Barrow: Britain could deploy its own nuclear-powered submarines to patrol the Indo-Pacific, the UK’s Defence Secretary Ben Wallace has said.

The proposal is one solution to plugging Australia’s capability gap as it retires its ageing Collins-class boats in the next decade but awaits its first nuclear submarine which some experts have suggested might not be ready until at least 2040. 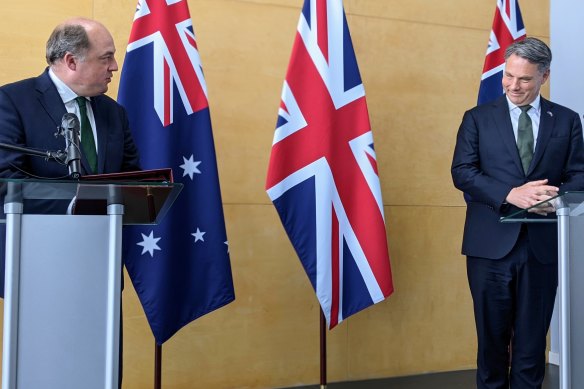 It was floated by Wallace after he hosted Australia’s Deputy Prime Minister Richard Marles for dinner at his favourite pub close to his hometown in the Lake District ahead of their formal bilateral meeting at BAE Systems shipyards in Barrow-in-Furness.

Australia is to decide by early next year whether to buy its first boats “off the shelf” from either Britain of the United States, or possibly even a composite solution.

Asked by The Sydney Morning Herald and The Age if Britain was in a position to supply Australia with its first sub, Wallace said that was not the only way to address the region’s capability needs in the short-term.

“We’re not in a position to provide an Astute, here and now,” he said.

He said that HMS Anson, which was commissioned at a ceremony attended by Marles as well as Prime Minister Boris Johnson who flew in specifically to meet the Deputy Prime Minister, was only the fifth boat in the seven that the UK has ordered for its own needs.

“Once I’ve got seven, the ability to pulse, base and potentially be more permanent over in the Pacific becomes very much a greater reality,” he said.

“Pulsing” means repeated visits; he said it was likely that the UK would continue to have its Astute subs visit Australia and operate in the region, as one did last year. 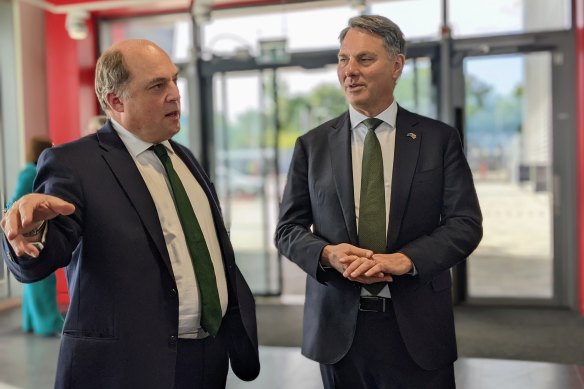 He said that when the last of the Astutes were completed, it would be ideal for the AUKUS trio to develop the next generation of submarines that was common to all navies.

“It might have a bit of all three of us on it, so it may look like a submarine that none of us have on our stock,” he said.

Marles said Australia had wasted a decade in securing its next generation of underwater hunters.

“We need to be doing this as soon as we can … we have no time to waste,” he said.

He expressed confidence that the Australian submariners who will train onboard Britain’s submarines would crew the Royal Australian Navy’s first boat.

Marles will finish his European trip in France to further mend ties that ruptured when Australia quit the contract for France to build Australia diesel-electric submarines.

Wallace said he had proposed doing joint patrols and deployments with France in the Pacific to showcase a European voice in the region.

“There are only two or three big countries in Europe that can deliver that voice and that’s Britain and France and when we’re together were quite formidable allies,” he said.

Wallace said that in his conversations with his French counterpart they understood the logic of Australia wanting to acquire longer-range submarines, even though it meant cutting the deal with France, something that caused a fallout between France and the UK and Australia.