Suspense is building ahead of Britney Spears’ planned audience with the judge overseeing her strict, court-ordered conservatorship.

What will she ask for? What’s the rush after 13 years? Is she really as happy as she claims to be in her Instagram posts?

While the hearing on Wednesday (Thursday AEST) will almost certainly be conducted out of the earshot of media and fans, her lawyer said in April that Spears requested it on an “expedited” basis. 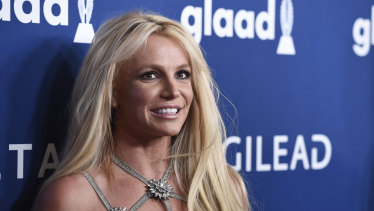 Britney Spears says the legal conservatorships has “too much control” over her life.Credit:AP

The last-known time Spears attended a hearing in person was 2019.

Since then, the Toxic singer has vowed she’ll boycott all stage performances until her dad Jamie Spears is removed from any involvement in her $US60 million ($79 million) estate.

In an Instagram post last Thursday, the 39-year-old broached the subject again while seeming to assure fans she’s not in need of any emergency rescue.

“I have no idea. I’m having fun right now. I’m in a transition in my life, and I’m enjoying myself,” she said.

Conservatorships are put in place when judges find that adults have such diminished mental capacity that they require a family member or professional to step in to make financial, medical and other important decisions for them.

Called guardianships in some US states, conservatorships have been granted over other high-profile Hollywood celebrities including Mickey Rooney, Amanda Bynes and, more recently, Real Housewives of Beverly Hills husband Tom Girardi.

“She articulated she feels the conservatorship has become an oppressive and controlling tool against her,” a court investigator assigned to her case wrote in a 2016 report, the New York Times reported.

The system had “too much control,” Spears said, according to the investigator’s account of the conversation. “Too, too much!”

Spears told the investigator that she was “very angry” about the way her life was being run, the Times reported.

She has security around her at all times, she said, and is also being tested for drugs numerous times weekly.

Spears wanted to make cosmetic changes to her home, including re-staining her kitchen cabinets, she told the investigator, but was forbidden by her father, the Times reported, because he told her too much money was being spent. 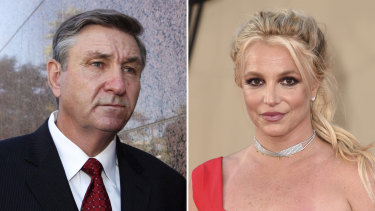 The public image of Spears’ life gave little sense of the turmoil she was expressing privately. An Instagram feed presented her as playfully approachable, and a new, lucrative Las Vegas show was set to begin in February 2019.

Then, a month before the opening, Spears announced an “indefinite work hiatus,” cancelling the residency. Jamie Spears had “almost died” after suffering a ruptured colon, according to a statement, which noted the pair’s “very special relationship.”

Spears’ two-part conservatorship was put in place after a series of high-profile mental health crises in 2007 and 2008 culminated with an involuntary hospitalisation. It includes one arm that oversees her security, medical care and visitation with her two minor sons and another that controls her vast fortune.

Her dad formerly controlled both arms, but he’s since been replaced by care manager Jodi Montgomery on the personal side. On the financial side, he recently was ordered to share duties with Bessemer Trust, a wealth management firm selected by his daughter.

“Mr Spears has performed his job well. This is not an opinion; he has taken the estate from being in debt and facing tens of millions of dollars of lawsuits to a current value of well over $US60 million,” Jamie’s lawyers said in a court filing last year.

They claimed Jamie has worked “hard with a team of professionals to restore (Britney) to good health, reunite her with her children, and revive her career.”

A conservatorship can always be dissolved by the court against a petitioner’s wishes, but in those cases, it’s up to the conservatee to prove their competence, and after years of intense and often adverse scrutiny, that can be difficult.

“A lot of what courts go by is history,” New York lawyer Carolyn Reinach Wolf, an expert in conservatorships, said. “If someone has acted responsibly and done well (as a conservator), that could be compelling enough to make the court say, ‘What’s the problem here? Why change? Let’s keep things as they are because they’re working.’”

Then again, courts have ongoing obligations to conservatees as well, Wolf said.

“The courts are required to act in the best interest of the incapacitated person while considering what the least-restrictive alternative is,” she explained.

The documentary, which portrays Spears as a victim of an overzealous legal proceeding and financial feeding frenzy, is now part of an Emmy campaign with huge billboards courting a nomination dotted around Los Angeles.

For her part, Spears has said she was rattled by the film.

“I didn’t watch the documentary but from what I did see of it I was embarrassed by the light they put me in,” she said on social media. “I cried for two weeks and well…I still cry sometimes!!!!”

Sephora plans day of diversity training at all U.S. stores after security called on singer SZA

Social distancing CAN be done in schools, insists government minister