A builder is suing his church for ‘religious discrimination’ after he was kicked out of a priest’s home he was staying in to make way for a new minister.

Jonathan Bennetts and his family moved into the manse owned by St Just Free Church in Penzance, Cornwall on reduced rent in exchange for voluntary caretaking.

A letter sent to Mr Bennetts by the church in 2017 indicates the church gave him ‘temporary use of the manse… given [his] circumstances at the time’.

But when St Just Free Church announced plans to appoint a new minister, Mr Bennetts refused to vacate the building.

A new minister was appointed in September 2018 and Mr Bennetts was suspended. By February 2019, however, he had still not vacated the property. 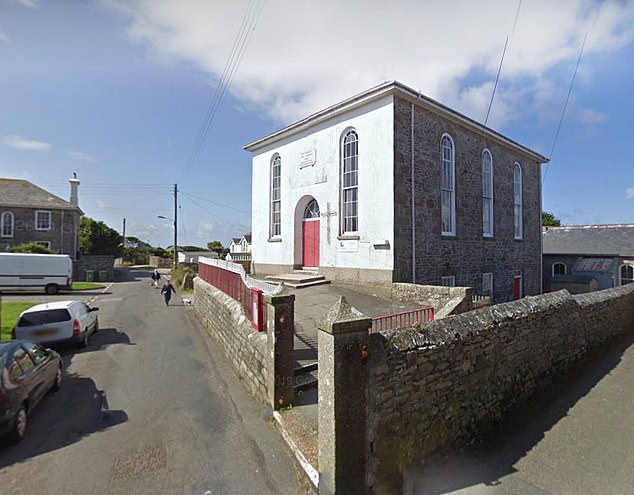 Jonathan Bennetts is suing St Just Free Church in Penzance, Cornwall (pictured) on grounds of ‘religious discrimination’ after it kicked him out of his ‘temporary’ accommodation

Following Mr Bennetts’ alleged ‘harassment’ of church leaders, his ‘refusal to accept the authority’ of the church meeting, and his ‘non-attendance at worship services’, an urgent meeting was held to terminate his ‘temporary’ contract.

Now Mr Bennetts has launched legal action, claiming the church has religiously discriminated against him by terminating his contract and kicking him out.

A preliminary tribunal hearing in Bodmin, Cornwall, heard Mr Bennetts, who had previously carried out building work at the church and was friends with its former minister, moved into the manse in 2012.

At the time he and his family did not have their own home and were allowed to stay in the manse for £300 per month, below the market rent of £700.

As part of the arrangement, Mr Bennetts carried out unspecified caretaker work such as cleaning and maintenance at a time of his choosing while remaining self-employed as a builder. His wife Cita managed the church cafe.

A 2012 letter to Mr Bennetts from the church also said ‘we in turn would provide all necessary encouragement to Jon in his stated desire to engage in training for lay pastoral work, with a possible view ultimately to the Ministry.’

However, Employment Judge Nicholas Roper said: ‘Unfortunately, from about 2017 the relationship between the parties began to break down.

‘It seems that [Mr Bennetts] was keen to take over as the minister for the church, but the respondent decided to advertise for the position.’

A letter sent to Mr Bennetts in September 2017 said: ‘Given your circumstances at the time it was felt wholly appropriate to exercise some Christian compassion and offer your family the temporary use of the manse.

‘Such use of the Manse was also offered on the condition that you would vacate it in the event that the trustees should require it to house a new Minister.

‘In view of the circumstances it was decided to ask you to be prepared to vacate the manse within a reasonable period of time from receipt of this letter, in any event by Easter 2018 at the latest.’

A letter from the church in 2019 said: ‘It was our hope and desire that there would be a period of reconciliation and you would return to full fellowship in the church.

‘In view of recent events and correspondence it is now clear that this is not possible.

‘Therefore, as a result of your continued harassment of the church leaders and the governing body, your refusal to accept the authority of the properly constituted church meeting and your non-attendance at worship services, your membership of the church is revoked.

‘Your voluntary position of caretaker is terminated with immediate effect. Please remove all personal possessions and surrender all your keys.’

Despite complications arose over whether Mr Bennetts was classed as an employee of the church, Judge Roper ruled he can sue on grounds of religious discrimination.

A full tribunal hearing will take place at a later date.