A drunken bully faces jail after leaving his ex-girlfriend feeling like a ‘prisoner in her own home’ – two years after walking free despite holding a knife to her throat in a vile attack.

Stephen Crellin, 37, held a knife to Hayley MacAdam’s throat after he falsely accused her of being unfaithful during their relationship. He also grabbed her face, chin and throat and slapped her during a separate attack.

At City Police Courts in Manchester, Crellin admitted using violence to secure entry to a property, battery and harassment and was remanded in custody for the preparation of reports. 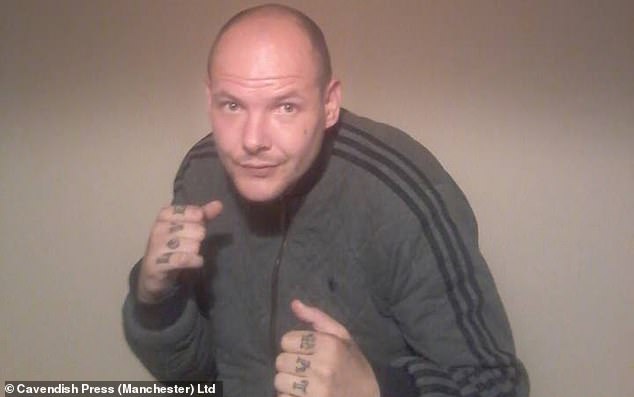 Stephen Crellin (pictured), 37, who has a 21-year record of violent behaviour with convictions dating back to July 1999, was remanded in custody for the preparation of reports

Back in 2017, Crellin, who has 71 offences including a string of violent crimes against Ms MacAdam and other women on his record, was given an 18-month prison sentence, suspended for two years, after the judge said legal guidelines on possible jail terms would only condemn him to three months behind bars, adding he deserved ‘another chance.’

Crellin from Stalybridge, Greater Manchester, later patched up his relationship with care worker Ms McAdam, 35, and she agreed to lift a restraining order which barred him from contacting her.

He was arrested again last October after she reported him to police.

In a statement, she said: ‘I regret having the restraining order lifted. I felt like a prisoner in my own home.

‘I was fearful about staying there because he assaulted me or damaged my property. I was in an abusive relationship, but I always found myself taking him back in. I was unable to live a normal life and was constantly looking over my shoulder.

‘I have an intercom installed so I don’t have to answer it in case it is him, although it was first installed before the offences took place.’

Crellin, who has a 21-year record of violent behaviour, drank alcohol since he was just aged 10 and and was once turned over to the police by his own mother.

His convictions date back to July 1999 and include harassment, occasioning actual bodily harm, battery, common assault, assault by beating and threats to kill.

On one occasion he assaulted two neighbours, kicking a woman in the groin and punching and kicking one man, leaving him with bruising to his back, ribs and head.

He also punched a 16-year-old girl in the face outside her home and smashed a panelled window in the front door when the victim’s mother took her inside. 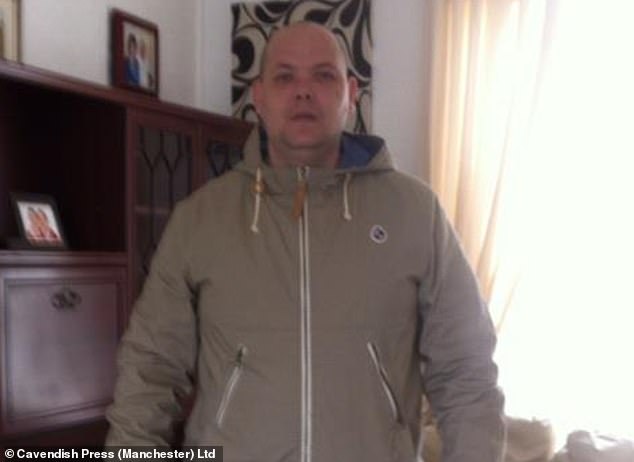 Crellin, pictured, has 71 offences including a string of violent crimes against Ms MacAdam and other women on his record. He was arrested again last October

In 2003 he was locked up after his mother Wendy reported him to police when officers were looking for him in connection to a string of assaults.

He was also issued with an anti-social behaviour order (ASBO) banning him from Micklehurst estate in nearby Mossley.

In April 2017 Crellin was back in court for headbutting Ms McAdam and holding a machete to her throat, calling her a ‘fat slag’ and a ‘f***ing tramp’ after he got drunk on Sangria and ten cans of Stella while watching a boxing match.

In another earlier incident he turned up drunk at her home and punched her in the arm, shouting: ‘You fat c*** – who ate all the pies’.

He was freed but in June last year bombarded Ms McAdam with phone calls and messages, visiting her address threatening to kick down her door and slice her throat.

The latest incidents occurred last September after she agreed to take Crellin back.

Prosecutor Verity Quaite said: ‘The complainant and the defendant had been in an on off relationship for around three years.

‘Incidents had also occurred between them previously, which resulted in a restraining order that was due to remain in place until February 2020 but it was lifted in mid-2019.

‘They began seeing each other again after a few weeks but after an argument between them the defendant left the complaint’s address saying the relationship was over.

‘He returned to the address a few hours later and shouted at the complainant telling her to “open the f***ing door”. He said he would put the “f***ing window in” if she didn’t own up and the complainant thought it would break.

‘The complainant says he also threatened to break her car window. He called her a fat slag, a rascal and asked for money off her. The defendant was interviewed the next day and denied there had been an argument. He suggested the complainant had been lying.

‘But in October 2019, the complainant picked him up from work and he was in a volatile mood. He called her a “f***ing s**g” and said she knew what she had done. He referred to his paranoia that she had been unfaithful. He later pointed a three-inch knife at her throat and said “I f***ing will”, and she fell backwards in fear of being hurt.

‘She was then pursued by the defendant even more- he grabbed her face, chin and throat and pushed her to her face with both hands for about a minute before she was released. Later they had had an argument about his drug use and the complainant ended the relationship by text.’

A barrage of messages followed and she felt compelled to let him back to her address.

‘He eventually left but the complainant was scared he would return and slept at a friends house that night. On 17 October the defendant sent numerous messages to her making it clear she didn’t want to be contacted by him. He accused her of having another partner and it was clear at this point that he had been outside her flat when sending the messages.

‘She blocked his number but he continued to call, and on one day he called her 53 times. He was interviewed but claimed he had been assaulted and that he had a number of bruises and scars. He accepted he had sent the messages and made the calls, but claimed they were mutual. He suggested she had previously made false allegations against him.

Ms Quaite added: ‘He was released but continued to call and text her. He tried to contact her through a friend who approached her with a letter, but she refused to accept it.

‘He was arrested on 24 October. He confirmed he made the calls and sent the messages. He admitted he tried to contact her several times between 18 and 24 October.’

In mitigation defence barrister Claire Brocklebank claimed her client had paranoid schizophrenia, saying: ‘It is clear that for a long time his diagnosis of anti-social behaviour disorder has been incorrect and this has led to a deterioration in his mental health and drug abuse issues, which get worse when he is receiving the wrong medication.

‘He is on the right medication now and his symptoms have almost disappeared. He is much better able to manage the mental health issues which contributed to this offence.’

Judge Angela Nield said: ‘His mental health is clearly a significant contributing factor and it is of concern to me that he has not been correctly diagnosed.

‘If he is released but does not receive the right medicine, that will significantly heighten the risk he presents.

‘I do not want the risk of him being released into the community and an argument arising between professionals about what the right diagnosis is.’

Football fan, 16, pours with blood after cop smashes his skull with baton strike