Megan McFarland, a spokeswoman from PG&E, told KTVU that the utility called an “all hands on deck” to get service back up and running. About 117,828 customers in the area were in the dark, the report said.

Social media users posted videos of flooding in cities like Millbrae in San Mateo County. Claudine Wong, a reporter for KTVU, posted video of the strong winds swaying trees while the storm hit. Tamalpais, which is north of San Francisco, recorded six inches of rain in a 12-hour span Sunday, USA Today reported.

KTVU reported that there was a wobbly, 100-foot tree in San Francisco’s Forest Hill neighborhood that prompted a mandatory evacuation. The tree eventually fell. Other trees have fallen across the city, blocking roads and damaging property. 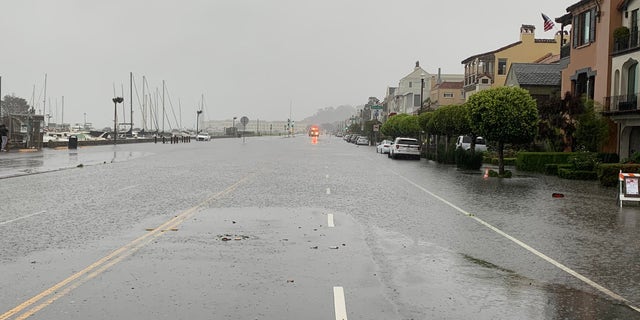 The bad weather stretched across most of Northern California and into the Pacific Northwest, according to the paper. The powerful storm originated in a bomb cyclone over the Pacific and dumped a record amount of rain in some cities, like Sacramento.