Home » World News » Can the Covid vaccine cause myocarditis? Pfizer and Moderna risk plus symptoms

EXPERTS are becoming increasingly confident there is a link between heart inflammation conditions and the Pfizer and Moderna jabs.

The rare side effect, if proven, can leave people hospitalised but there have been no reports of serious long-lasting illness.

The MHRA said today it had concluded the jabs – which use the same technology called mRNA – "may be linked with a small increase in the risk of these very rare conditions".

Dr June Raine, MHRA Chief Executive, said: “Over 75 million doses of COVID-19 vaccines have been administered in the UK, saving thousands of lives, and our advice remains that the benefits of getting vaccinated outweigh the risks in the majority of people.

“No medicine is without risk, and in this case the risk appears to be small. We will continue to monitor this issue closely.

“The benefit risk balance for the Pfizer/BioNTech and for the Moderna vaccine remain favourable.

"It is still vitally important that people come forward for their first and second vaccination when invited to do so, unless advised otherwise.”

Initial reports from the US suggest the general risk of heart conditions myocarditis and pericarditis is around 1.2 people in 100,000.

It goes up for younger people and males and after the second dose compared to the first.

Another study has also seen a similar risk of around one in 100,000.

Because the odds are so low, experts still say the benefits of getting a Covid jab still outweigh any potential risks.

That goes for younger adults and children too, who in the US have been given approval to get vaccines.

What’s more, younger people are not able to get any other Covid jab because the AstraZeneca one has been linked to a higher risk of blood clots. 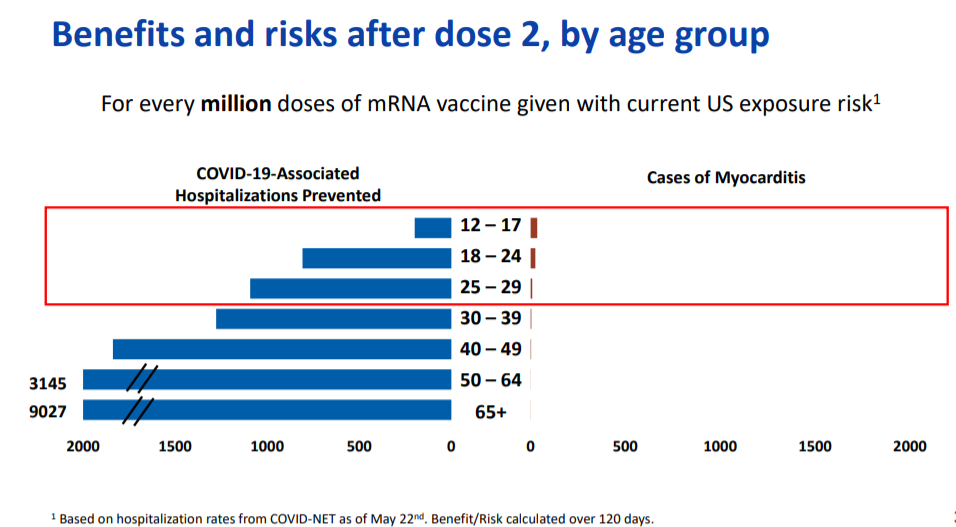 Therefore, their best chance of protecting themselves against the coronavirus is by getting the Pfizer or Moderna jab.

Here we outline what symptoms of heart inflammation to look out for, and how low the risk is for you.

What is the risk of heart inflammation after a Covid vaccine?

The Covid-19 Vaccine Safety Technical (VaST) Work Group confirmed “data available to date suggest likely association” of myocarditis and pericarditis in people who get the Pfizer and Moderna jabs.

After meetings to look at the data in June, Dr Tom Shimabukuro, deputy director of the Immunization Safety Office at the CDC, said there had been 1,226 cases of myocarditis after mRNA vaccines.

It’s approximately 12.6 heart inflammation cases per million doses given in the US, based on roughly 300 million shots administered as of June 11, the CDC said.

There have been more diagnosed after Pfizer (791 compared to 435 in Moderna), which may be because it has been used more in the US.

“This is still a rare event,” Dr Shimabukuro said at the meeting.

A breakdown of the risk per age group is:

Odds are much higher in second doses across all age groups, the CDC report on June 23 said. 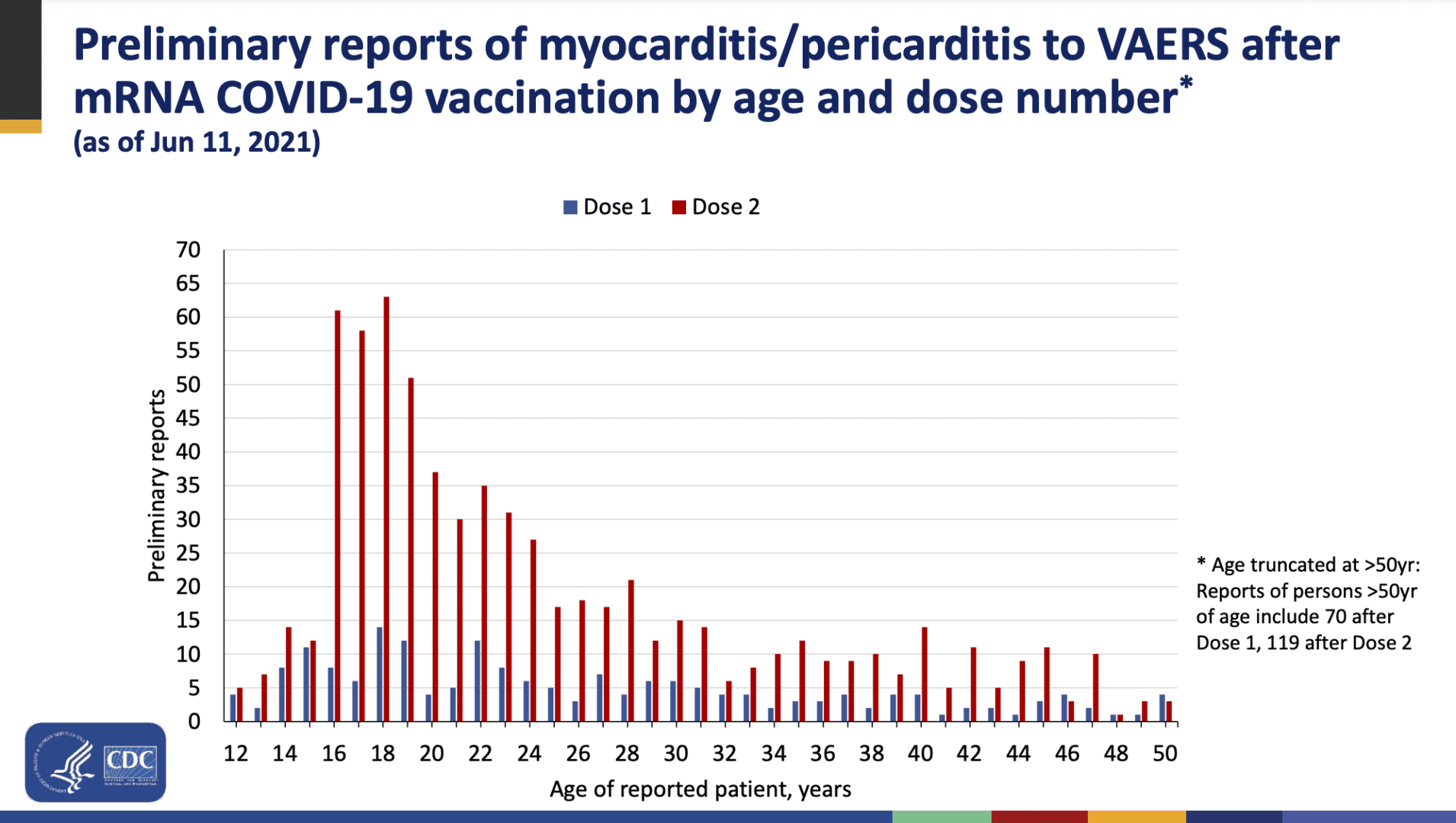 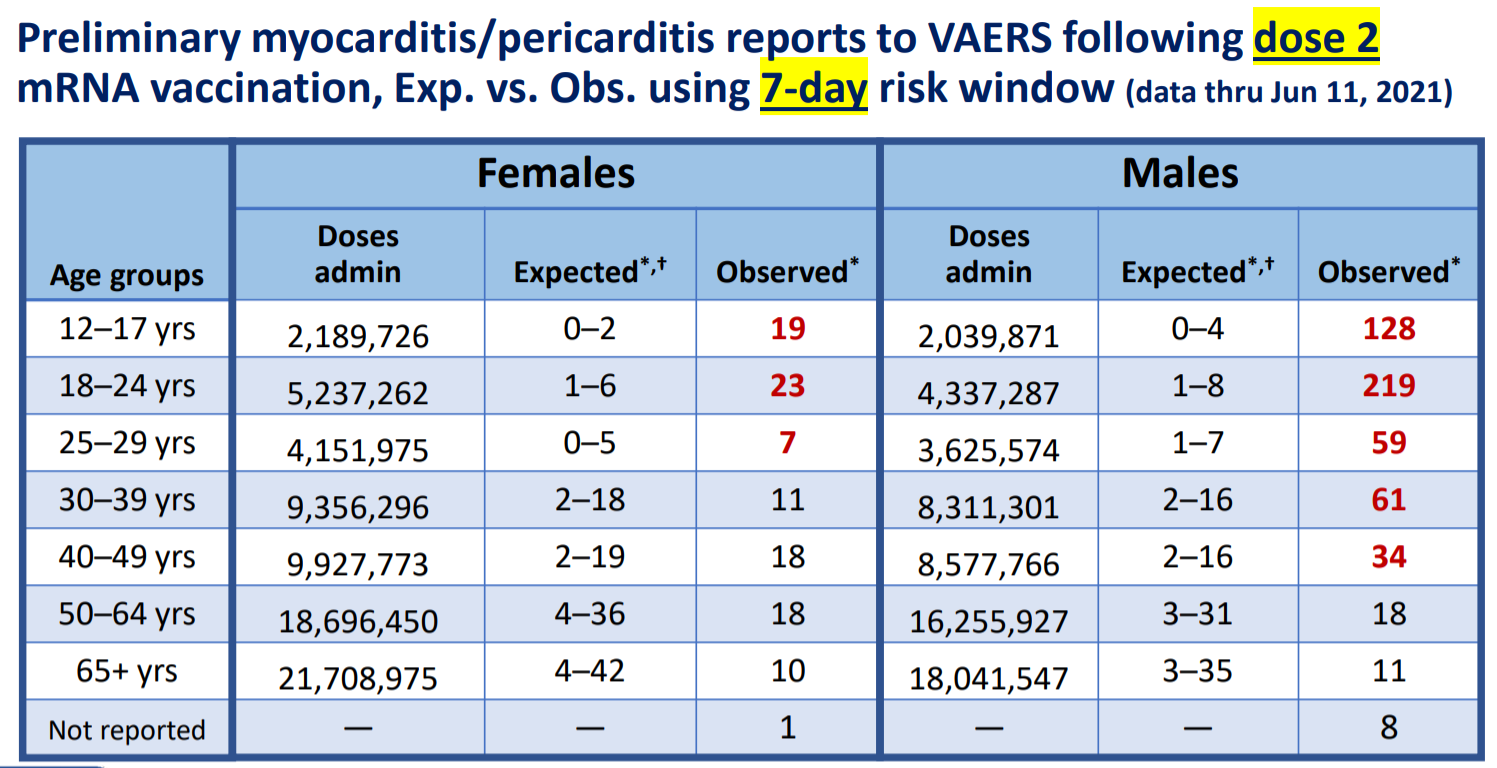 For example, a 12 to 17 years old would have a 5.3 per million chance of getting heart inflammation after their first dose, which rises to 37 per million after a second dose.

And the risks are higher in men than women, with teenage males having a 66.7 per million chance of myocarditis/pericarditis after their second jab.

Dr Shimabukuro said there appears “to be a pretty strong dose two effect”.

However, the chances of the problem are still low compared to how likely it is they would catch Covid, and even be hospitalised with it.

Around 59-69 cases of myocarditis had been diagnosed in the same time period. 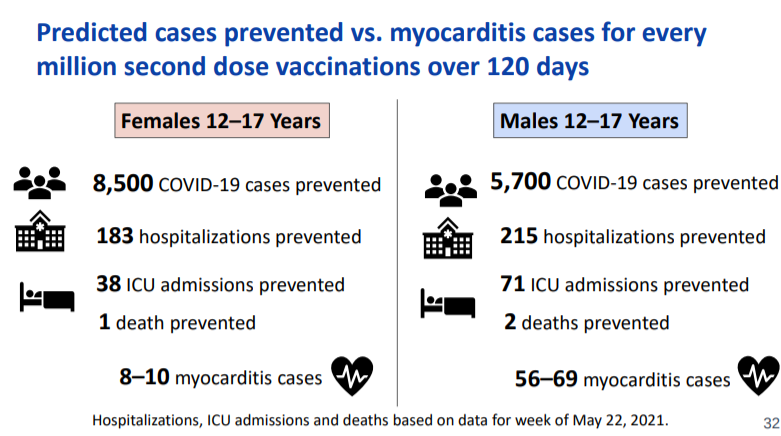 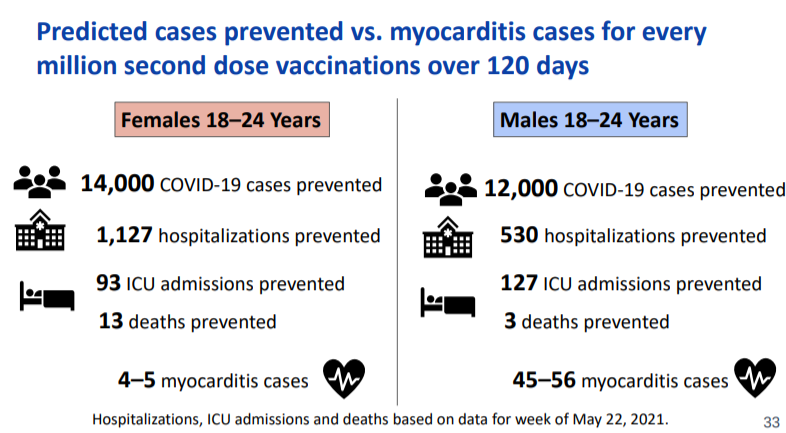 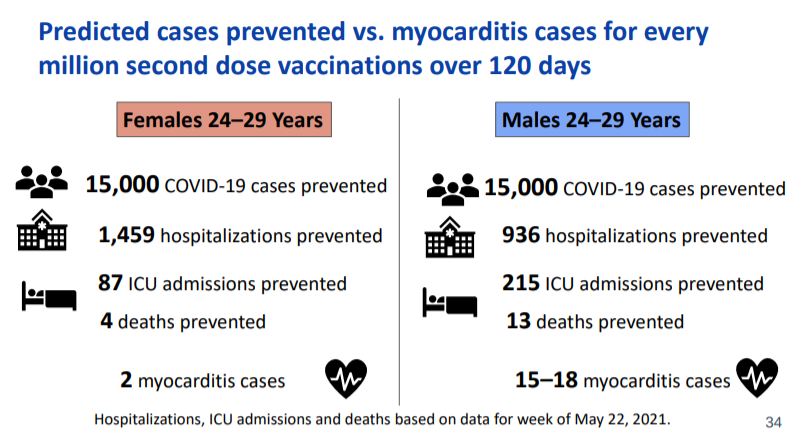 Elsewhere in the world

An official breakdown of figures for the UK is not available and regulators have not given an official warning of the side effect yet.

The MHRA said it is still investigating cases but has stopped saying cases are at a similar level to the general population, suggesting it now considers heart inflammation a potential risk of mNRA vaccines.

In its latest report of side effects to June 16, it said there have been 88 cases of heart conditions among 27.7 million Pfizer shots – a risk of three in a million.

There have been three cases after 73,000 Moderna shots, equivalent to around 41 in a million.

There have also been 119 among 44.1 million Oxford/Astrazeneca vaccine shots, or 2.7 in a million.

Meanwhile, there have been 148 cases of myocarditis in Israel – the first country to spot higher than expected cases in its population in January.

The Israeli Ministry of Health says there have been 27 cases of 5.4 million first doses, and 121 after 5 million second doses.

What are the symptoms?

The main symptoms to look out for, according to the British Heart Foundation and the Mayo Clinic, are:

The MHRA said anyone who experiences "chest pain, shortness of breath or feelings of having a fast-beating, fluttering, or pounding heart" after a jab should seek urgent medical attention.

Officials have suggested the symptoms of heart inflammation linked with the mRNA vaccines may be different. 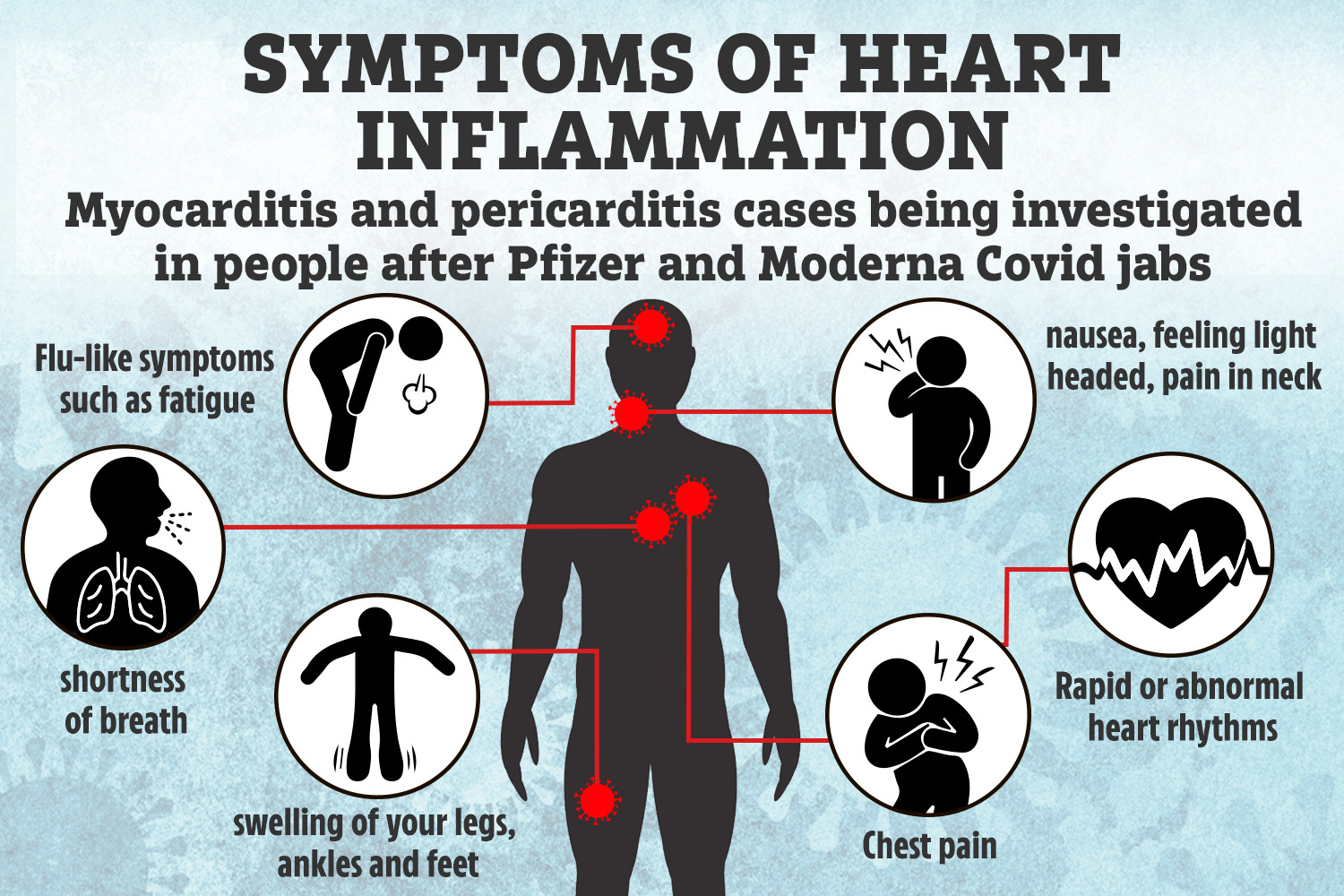 Dr Matthew Oster, from the CDC's COVID-19 Vaccine Task Force, said: "mRNA vaccines may be a new trigger for myocarditis, yet it does have some different characteristics.”

The most common symptoms reported by patients were chest pain, shortness of breath, and difficulty sleeping, according to the Centre for Infectious Disease Research and Policy.

Dr Shimabukuro said symptoms typically occur at around day four after the first shot, and day three after the second.

How is it treated?

Data so far has shown that no one has become critically ill with heart inflammation following their jab.

But most have needed hospitalisation as a means to monitor their heart and get treatment.

Of 323 patients analysed by the CDC, 309 were hospitalised. At the time of their report, only nine were still in hospital.

The majority of patients appear to have responded well to treatment – of which has not been described.

Usually people with myocarditis don’t need treatment as their symptoms resolve on their own, although patients often have to avoid exercise for a few months.

The Mayo Clinic says: “Although antiviral medications are available, they haven't proved effective in the treatment of most cases of myocarditis.”

If myocarditis is causing heart failure or arrhythmias, medication may be given to reduce pressure on the heart or stop blood clots forming.

Aggressive treatments using machine support may be used in very severe cases, such as an ECMO machine which takes over the work of the heart.