Home » World News » Can you dig it? Vote for Victoria’s first fossil emblem

Did you know there was once a bird with a fearsomely serrated long beak and a six-metre wingspan that cruised local skies?

Among Museums Victoria’s vast fossil collection is a piece of a pelagornis’ leg bone that was found on a beach at Beaumaris, in Melbourne’s south-east, in 2004. 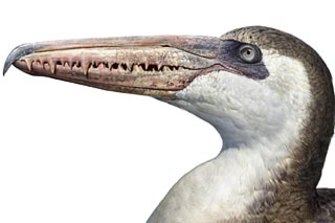 An artist’s impression of a pelagornis – a giant prehistoric bird with a six-metre wing span and serrated beak.Credit:Peter Trusler/Museum Victoria

Which begs the question: what size of hot chip would be required to satisfy its appetite?

However, the specimen has been dated to about 5 million years ago, long before Earth was blessed with hot chips and before there were Melburnians to throw them.

The pelagornis’ wingspan was as tall as a giraffe and more than twice the span of a modern albatross.

Museums Victoria wants to raise the profile of (some of) its fossils – there are about 4.2 million – and is calling on members of the public to vote online for a state fossil emblem. 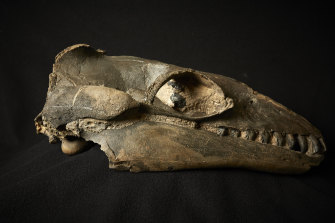 The pelagornis fossil is one of eight candidates selected by palaeontologists from the broad range of the state collection.

One of the most intact specimens is the Janjucetus hunderi fossil – a skull of a whale dubbed the T-Rex of the deep. It was named after Jan Juc beach, near Torquay, on Victoria’s Surf Coast, and Staumn Hunder, the young man who found it in a limestone rock in the late 1990s. 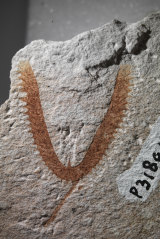 The piece is 25 million years old and is considered one of the most globally important fossil whale discoveries. Janjucetus fossils are unique to Victoria.

Another contender conveniently looks like a V, for Victoria. It’s an Isograptus victoriae, a small 470-million-year-old marine invertebrate, this one was found in Castlemaine. Miners once used such fossils to track seams of gold underground.

Three Australian states and the Australian Capital Territory currently have a fossil emblem.

Museums Victoria palaeontologist Erich Fitzgerald said the pelagornis was an “awesome” candidate for state emblem because the specimen found at Beaumaris was the only evidence of the species found in Australia.

“It was an utterly spectacular prehistoric animal that captures the imagination with its size and bizarre beak,” he said. 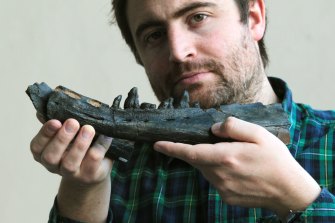 The eight candidates for state fossil emblem will be on display in the 600 million years section of the Science and Life Gallery when Melbourne Museum reopens.