Truck drivers in Canada are protesting vaccine mandates on their industry with a massive convoy that may break a world records.

“It’s 70 km long,” Benjamin Dichter, spokesman for the Freedom Convoy 2022, told the Toronto Sun. “I have seen footage from an airplane. It’s impressive.”

The Freedom Convoy left from Vancouver for Ottawa on Sunday to protest the federal government’s vaccine mandates for cross-border truckers, which took effect on Jan. 15. The Canadian Trucking Alliance estimates that roughly 15% of truckers in the country are not fully vaccinated, or about 16,000 truck drivers. 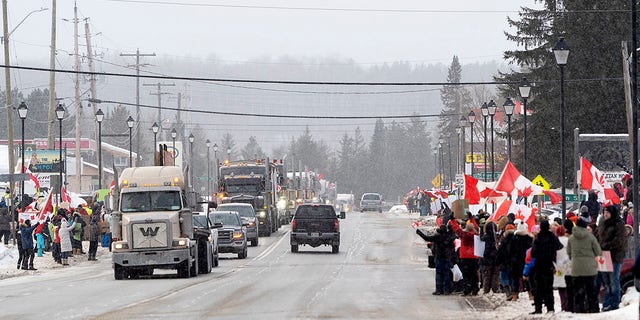 Protesters and supporters for a COVID-19 vaccine mandate for cross-border truckers cheer as a parade of trucks and vehicles pass through Kakabeka Falls outside of Thunder Bay, Ontario, on Wednesday, Jan. 26, 2022.
(David Jackson/The Canadian Press via AP)

Guinness World Records show that the longest convoy recorded took place in Egypt in 2020, coming in at nearly 5 miles long.

“The largest parade of trucks consisted of 480 trucks and is achieved by Tahya Misr Fund (Egypt), in Cairo, Egypt, on 20 November 2020,” Guinness states on its website. “With a length of 7.5 km, Tahya Misr Fund was able to organize a parade of 480 trucks, amid the harsh weather and heavy rain, breaking the Guinness World Records title for the largest parade of trucks, which was achieved 16 years ago in the Netherlands with a parade size of 416 trucks.” 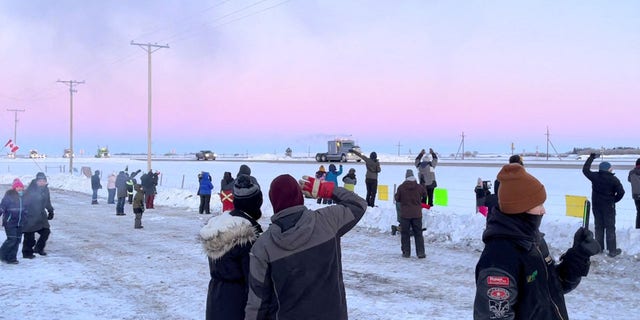 Family, friends and neighbors gather to show support for the freedom convoy on the Trans-Canada highway in Grenfell, Saskatchewan, Canada Jan. 25, 2022, in this screenshot obtained from a video on social media.
(Mark Dimler/via REUTERS )

The truckers’ convoy could be 10 times larger than the record if it stays intact on the trip to the Canadian capital. Estimates say 50,000 trucks could be participating, the Toronto Sun reported.

The convoy plans to reach Ottawa by Saturday for a protest.

Canadian Prime Minister Justin Trudeau said participants of the protest are a “small fringe minority who are on the way to Ottawa who are holding unacceptable views.” 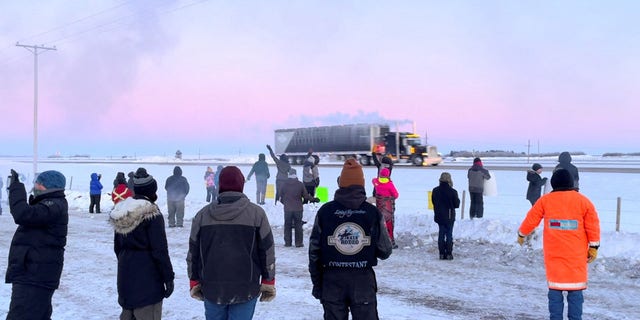 Family, friends and neighbors gather to show support for the freedom convoy on the Trans-Canada highway in Grenfell, Saskatchewan, Canada, Jan. 25, 2022, in this screenshot obtained from a video on social media.
(Mark Dimler/via REUTERS )

“What we are hearing from some people associated with this convoy is completely unacceptable,” he continued.

Canada has had some of the most stringent coronavirus mandates in the world. Ontario locked down earlier this month and will only reopen its restaurant dining rooms, gyms and movie theaters at the end of the month. Vaccinations were made mandatory in federally regulated workplaces last year, and the premier of Quebec announced plans this month to penalize residents of the province who remain unvaccinated for nonmedical reasons.

Fewer potholes being repaired in England and Wales

May warns ‘Brexit won’t happen without compromise on both sides’