Mother knows best! Cat carries one of her kittens into Turkish hospital and ‘asks doctors for help’ after the small animal developed an eye infection

A cat in Turkey melted hearts after walking into a hospital carrying her new-born kitten in her mouth seeking medical help.

Video footage recorded in a hospital in the Karabaglar district in Izmir, Turkey, showed the cat walking into the hospital with its kitten clutched in its mouth.

People in the video can be seen stepping aside to allow the mother cat through the building, with some telling other people to move out of the way.

The mother cat had previously been helped by the hospital staff who had left food and water out for the animal. 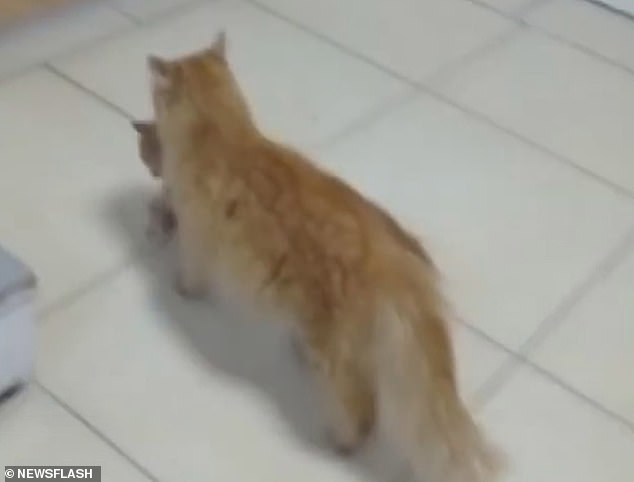 A mother cat melted hearts after walking into a hospital in the Karabaglar district in Izmir, Turkey, carrying her new-born kitten in her mouth seeking medical help 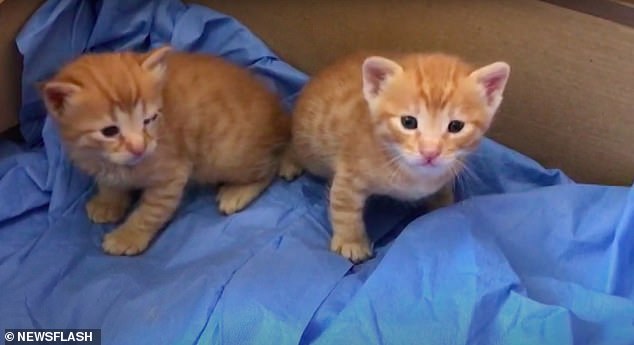 The kitten (left) was suffering with an eye infection and had been left unable to open its eye, causing its mother to search for help. The medical staff had previously left out food and water for her

After examining the kitten, doctors and nurses discovered the animal was suffering with an eye infection and, following a consultation, a veterinary clinic intervened to help treat the kitten.

Additional video clips recorded by members of staff at the hospital in Turkey showed two kittens sitting in a box while a health worker talked to them.

While another showed a nurse applying eye drops to help treat the kitten’s infection.

Speaking to local media, one of the health workers said: ‘We were giving food and water to the mother cat living on the street with other people living in this area. However, we did not know that she gave birth to kittens.

‘As we began to receive patients in the morning, she showed up with her kittens. She asked for help, meowing for a long time. We were shocked.

‘Upon careful examination, we saw that the kittens were not able to open their eyes due to infection.

‘We consulted with veterinarians and gave medicine as described. When the kittens opened their eyes a short time later, we were thrilled.

‘Later, we sent the mother cat and kittens to Uzundere for further care. This is the first time something like this has happened to us. We were emotional and delighted to see that they recovered well.’