Instead, Victoria’s Chief Health Officer Brett Sutton took to Twitter to warn about the ongoing dangers posed by the disease, shortly before national cabinet confirmed that from October 14 Australians will no longer have to stay home after testing positive to COVID-19. 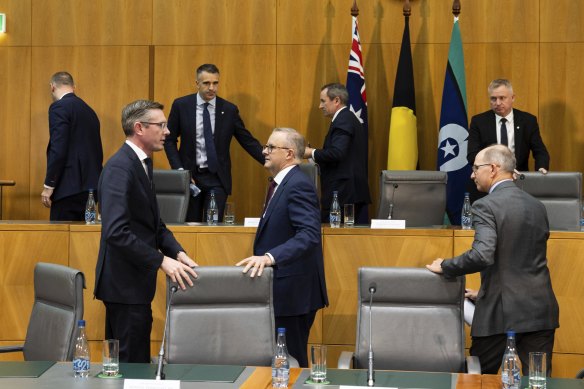 “Sleepwalking into COVID is not a strategy I would recommend. Still much remains uncertain,” he said, while sharing an article warning new COVID-19 waves could be coming.

It comes as a number senior health sources told The Age that a meeting of the nation’s chief health officers was cancelled on Thursday, with the Australian Health Protection Principal Committee (AHPPC) not directly consulted on the isolation change.

The prime minister, premiers and chief ministers made the decision after receiving a briefing from Chief Medical Officer Paul Kelly, who chairs the AHPPC.

The Victorian government refused to say on Friday if the premier or anyone else from government had sought the advice of Victoria’s chief health officer ahead of the meeting.

A statement from Premier Daniel Andrews instead said that “Victoria supports the unanimous decision taken today and the continuation of a nationally consistent approach”.

Victoria’s Health Minister Mary-Anne Thomas, who under the state’s pandemic laws is responsible for making and changing pandemic orders after consulting the chief health officer, indicated that she last spoke to Sutton over a week ago.

“My last conversation with the CHO was in relation to the orders as they pertained to the mandating of masks on public transport,” Thomas said during a Friday morning press conference.

They showed that the Victorian government prioritised national consistency over competing health concerns when it scrapped its public transport mask mandate last week, despite advice that even moderate mask use by passengers would reduce transmission significantly.

Sutton detailed reservations about the mandate being lifted, saying that, even if less than 50 per cent of travellers complied – in line with recent estimates – it would still help significantly reduce transmission.

He said mandates particularly helped support people with disabilities and others at increased risk from COVID to use public transport or taxis “where they have no other option available”.

However, he said moves by other states, including NSW, South Australia and Queensland, to change their rules meant people questioned the science behind the rule.

Sutton said it was up to the health minister whether she wanted to maintain the mask mandates because of their health benefit “particularly for those who do not have other options for travel” or ease the rules “noting the competing issues of national consistency [and] confidence in the rationale and public health benefit as above”.

But with the isolation rule change not coming into force until October 14, this means the chief health officer’s advice may not be released for many weeks.

“We have the most transparent process of any jurisdiction when it comes to communicating with the Victorian population the reason for the decisions that have been taken,” Thomas said on Friday.

On Friday morning the Victorian government released two independent reports into the state’s COVID-19 response – including one that found there has been insufficient information provided by the government since it ended its daily COVID-19 press conferences in October.

Thomas only committed to releasing the reports after The Age revealed they would not be made public prior to the election.

The review of COVID-19 communications in Victoria largely complimented the approach of public health officials who worked with local communities to reach those most vulnerable to misinformation.

However, it also warned the end of daily press conferences and severe cuts to the health department’s dedicated pandemic workforce had resulted in insufficient access to clear and easy information about how people could help protect themselves.

“Misinformation starts to take hold in the absence of more authoritative advice. Without clear messaging and expert advice from the government, the media turn to people in the community who have an opinion.”