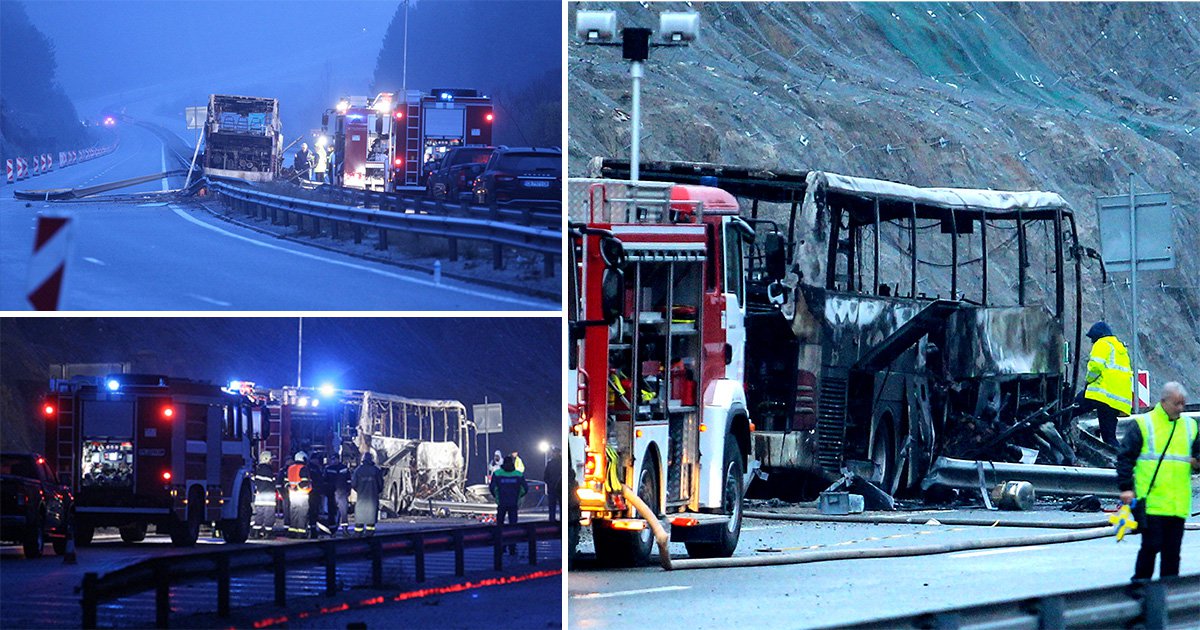 At least 45 people including children have died after their bus caught fire and crashed into guardrails in western Bulgaria.

Authorities have said the bus, which was registered in Northern Macedonia, crashed around 2am and there were around a dozen children among the victims.

Only seven people were thought to have survived the tragedy and reports said some of them had to leap from the burning wreckage to escape. They have been taken to hospitals for treatment.

There were no other vehicles involved in the accident, which occurred on a highway about 26 miles from the capital Sofia, near the village of Bosnek.

It was thought to have been travelling from Turkey’s main city of Istanbul to Skopje in North Macedonia.

The cause of the crash was not immediately clear. Officials said an investigation will be launched.

National police chief Stanimir Stanev told bTV television that 45 of the 52 people on the bus were killed. ‘Of the victims…12 in total were under the age of 18,’ he added.

Many of the dead are thought to be Macedonians. Bulgarian news agency Novinite said representatives from Macedonia’s embassy visited a hospital where some of the victims were taken.

Bulgaria’s caretaker Prime Minister Stefan Yanev was on the site of the crash early Tuesday and told reporters it was ‘a huge tragedy’.

Mr Yanev said: ‘I take this opportunity to send my condolences to the relatives of the victims. Let’s hope we learn lessons from this tragic incident and we can prevent such incidents in the future.’

Interior Minister Boyko Rashkov, who was also on the scene, added: ‘It’s a terrifying picture in there. I haven’t seen anything like that before.

‘Nobody can say for certain how many are there and who they were. The bodies are badly burned and have to be identified one by one.’

Bulgaria has a history of deadly bus accidents. Seventeen Bulgarian tourists died in 2018 when their bus skidded on a wet road and overturned.

A total of 628 people died in road accidents in 2019 and 463 in 2020 in the country of 6.9 million people, according to official data. The accidents were often attributed to poor road conditions, outdated cars and speeding.