China bars travellers from the UK, Belgium, the Philippines and India in new COVID-19 clampdown

Beijing has barred non-Chinese travellers from Britain, Belgium, the Philippines and India, imposing some of the most stringent entry curbs of any country in a new COVID-19 clampdown.

China, where the coronavirus first emerged late last year, has largely brought its outbreak under control through tight travel restrictions and strict health measures for anyone entering the country.

As the pandemic continued to ravage the rest of the world, the Chinese embassies in the four countries announced the blanket ban yesterday to guard against a resurgence of cases in China. 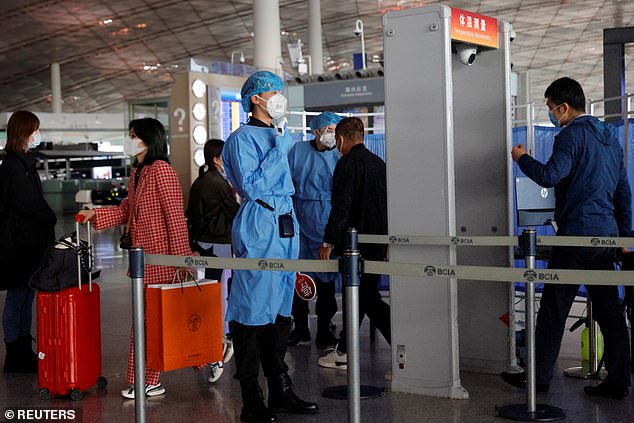 Beijing has barred non-Chinese travellers from Britain, Belgium, the Philippines and India. Health staff check the temperature of people as they enter at Capital Airport in Beijing today

In March, as the virus ripped across the world, China shut its borders to all foreign nationals.

It gradually eased restrictions to allow those stranded overseas to return with special permission from its embassies, negative COVID-19 tests and a two-week quarantine on arrival.

But in a sharp reversal, as the outbreak once more billows out across Europe, the Chinese embassy in the UK on Wednesday said Beijing had decided to ‘temporarily suspend’ entry from Britain by non-Chinese nationals.

Embassies in Belgium, the Philippines, India, Ukraine and Bangladesh have since put out similar notices. 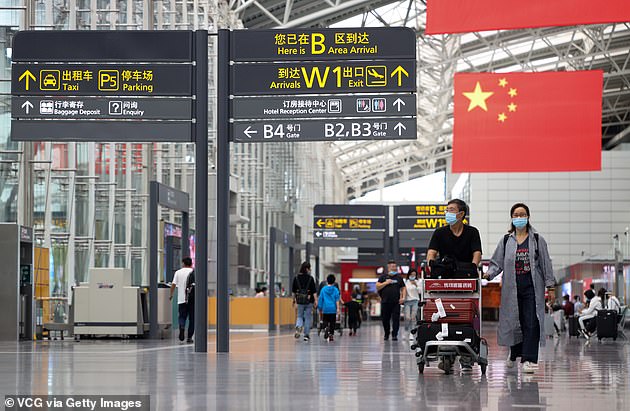 China, where the coronavirus emerged late last year, has largely brought its outbreak under control through tight travel restrictions. In this file photo, passengers are seen walking through the departure hall at Baiyun International Airport in Guangzhou on October 8

The restrictions, which cover those with valid visas and residence permits and take effect in conjunction with a more restrictive testing regime for arrivals from several other countries, drew a frosty response from Britain.

‘We are concerned by the abruptness of the announcement and the blanket ban on entry, and await further clarification on when it will be lifted,’ said the British Chamber of Commerce in China.

But the Chinese foreign ministry said Thursday it was a ‘reasonable and fair’ measure to tackle the pandemic.

‘China is drawing on the practices of many countries and adjusting its handling of the entry of the relevant people into China based on the changing pandemic situation,’ said ministry spokesman Wang Wenbin.

England started a month-long lockdown on Thursday. Britain’s virus death toll is the highest in Europe and it is grappling with more than 20,000 new cases a day. 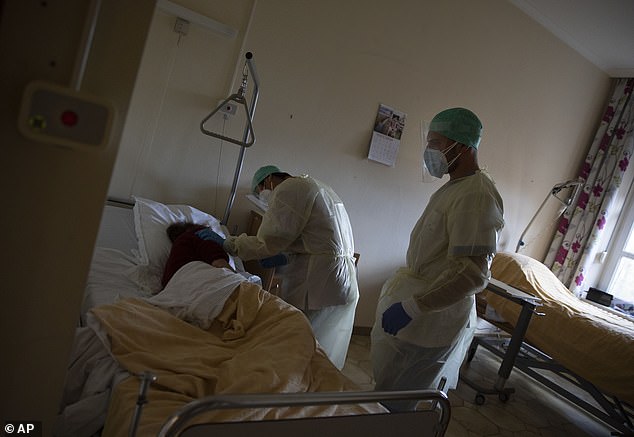 Belgium has Europe’s highest per capita number of new confirmed cases. Doctors are pictured treating a patient suffering from the coronavirus at a COVID-19 ward in Landenne, Belgium 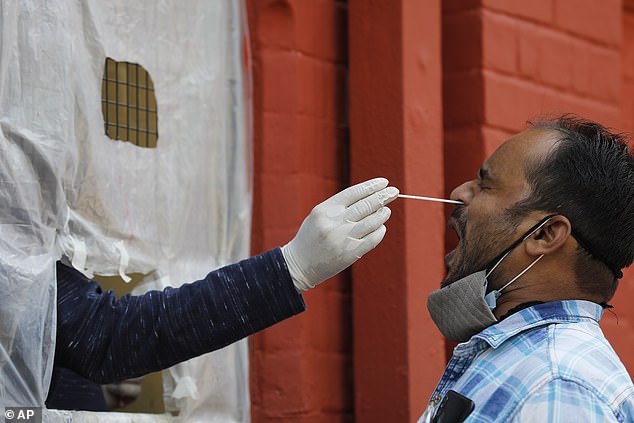 Beijing has barred non-Chinese travellers from India in a new COVID-19 clampdown. The photo taken on November 3 shows a health worker taking a nasal swab sample in Prayagraj, India

Belgium has Europe’s highest per capita number of new confirmed cases, while the Philippines has the second-highest number of infections and deaths in Southeast Asia after Indonesia.

The suspensions were a partial reversal of an easing on September 28, when China allowed all foreigners with valid residence permits to enter.

From Friday, all passengers from the United States, France, Germany and Thailand bound for mainland China must take a nucleic acid test and a blood test for antibodies against the coronavirus no more than 48 hours before boarding.

Flights scheduled for Friday are not covered by the new rule, since passengers would have done their tests before that day under previous requirements. 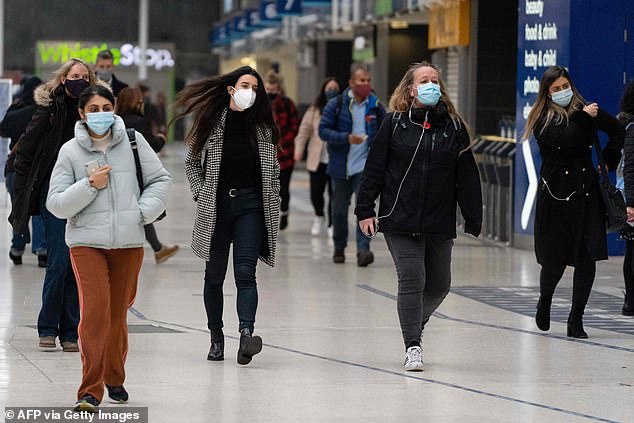 In a sharp reversal, as the outbreak once more billows out across Europe, the Chinese embassy in the UK on Wednesday said Beijing had decided to ‘temporarily suspend’ entry from Britain by non-Chinese nationals. In this file photo, commuters walk at Waterloo Station in London 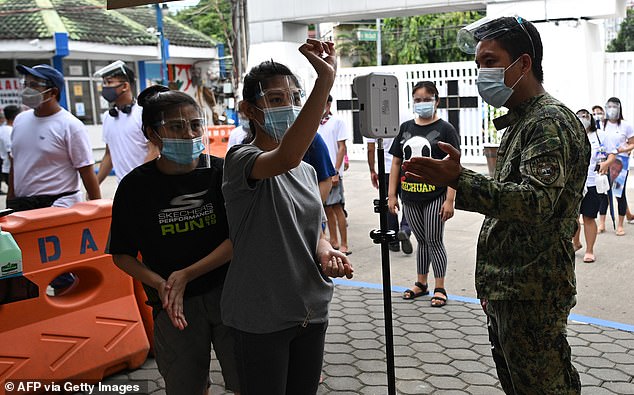 The Philippines has the second-highest number of infections and deaths in Southeast Asia after Indonesia. A police officer checks residents’ temperature in Manila on October 28

Meanwhile, many people planning November visits to China scrambled to book earlier flights to circumvent potentially disruptive restrictions due to come into force for other countries from Friday.

Linyi Li, a Chinese national, had planned to fly from Seattle to China in mid-November but switched her flight to November 6 even though fares had tripled.

‘The tickets were sold out in seconds, as people were all scrambling to beat the deadline,’ Li, 30, told Reuters.

‘I’ve been rushing to sell many of my family belongings in the past days in case I can’t get back to the States.’

China also plans to impose dual-test requirements on travellers from Australia, Singapore and Japan from November 8. 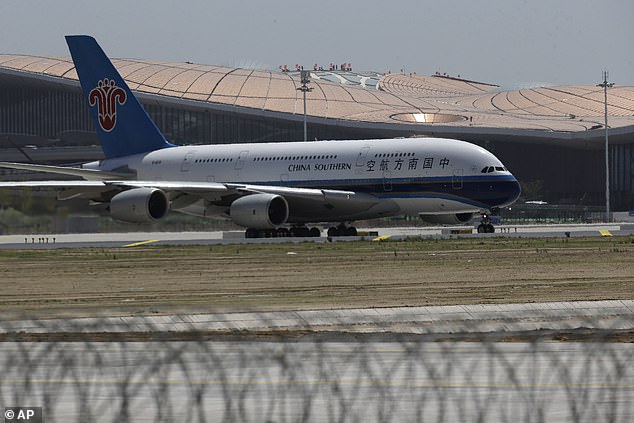 The European Union Chamber of Commerce in China said the antibody test was not widely available in many countries.

‘(So) unfortunately, while technically leaving the door open, these changes imply a de facto ban on anyone trying to get back to their lives, work and families in China,’ said the European Union Chamber of Commerce in China.

On Tuesday, China Southern Airlines, the country’s biggest carrier by passenger load, said it would suspend transit services for passengers embarking from 21 countries, mostly African and Asian countries and including India and the Philippines.

The number of weekly international passenger flights serving mainland China from late October through March is set to slump 96.8 per cent from a year earlier to 592, the latest schedules show.