The Chinese army sent aircraft into Taiwan’s air defence zone over the weekend to ‘test and improve their combat capability’, Beijing said.

The People’s Liberation Army manoeuvres were repeated on Saturday and Sunday. 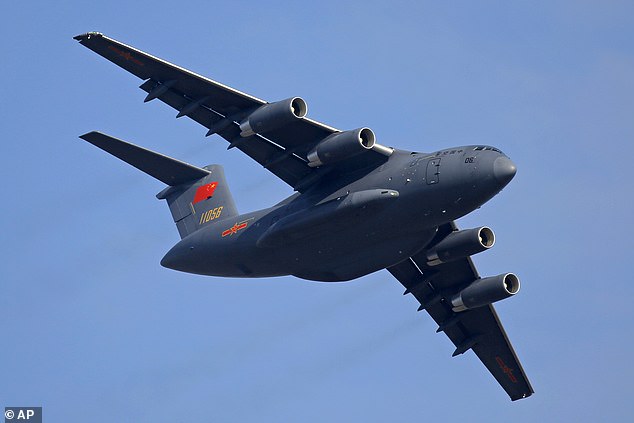 Beijing’s Eastern Theatre Command said in a statement that naval and air force assets carried out the drills to ‘further test and improve the joint combat capability of multiple services and arms’.

Although Taiwan responded proactively on Friday, it did not scramble defence systems during Chinese military manoeuvres on Saturday or Sunday.

Living in constant fear of a Chinese invasion, the self-ruled island 100 miles off the mainland raised its alert after Russia entered Ukraine in late February. 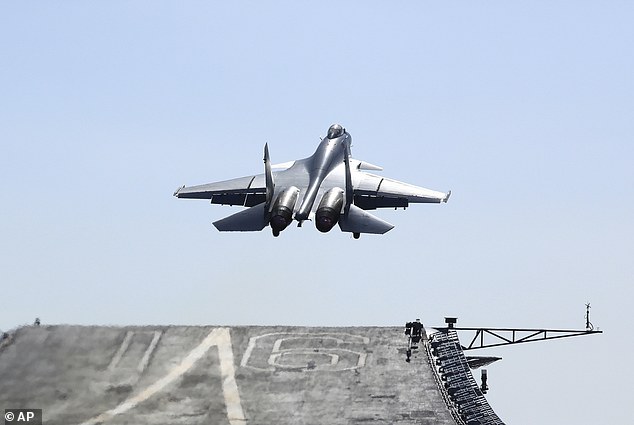 Pictured: a Chinese jet takes off from the Liaoning aircraft carrier in the Yellow Sea near Korea

It suspects a copycat invasion by Beijing, which has not condemned Putin’s actions.

Taiwan has complained for the past two years about Chinese military activity around the southern and south-western part of its air defence identification zone (ADIZ).

No shots were fired and the Chinese aircraft had not been flying in Taiwan’s air space.

Its ADIZ is a broader area monitored and patrolled by Taiwan in the hope it will provide more time to respond to military threats. 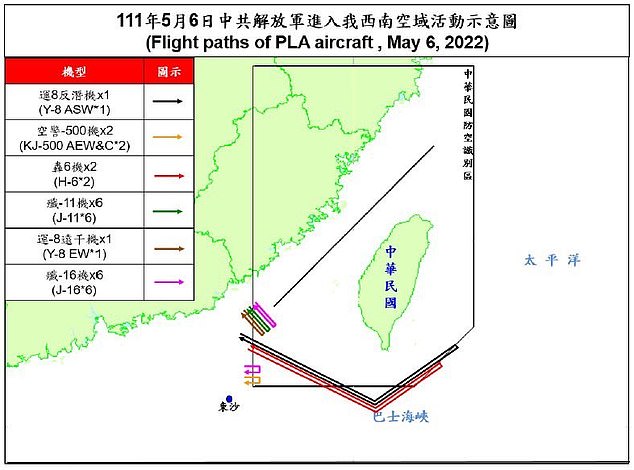 ‘But we have the determination to defend our country,’ he added.

Japan reported last week that eight Chinese naval vessels including an aircraft carrier passed between its islands in the Okinawa chain near Taiwan.

Taiwan also carried out pre-announced missile and other drills off its southern and southeastern coasts last week.

China has never renounced the use of force to bring Taiwan under its control.

Why China set its sights on Taiwan

Taiwanese soldiers hoist the flag of Taiwan in Taipei on May 10. China considers Taiwan as a part of its territory, but many Taiwanese people want the island to be independent

China and Taiwan have a long-standing dispute over the island’s sovereignty.

China considers Taiwan as a part of its territory, more precisely a province, but many Taiwanese want the island to be independent.

From 1683 to 1895, Taiwan was ruled by China’s Qing dynasty. After Japan claimed its victory in the First Sino-Japanese War, the Qing government forced to cede Taiwan to Japan.

The island was under the Republic of China’s ruling after World War II, with the consent of its allies the US and UK.

The leader of the Chinese Nationalist Party, Chiang Kai-shek, fled to Taiwan in 1949 and established his government after losing the Civil War to the Communist Party and its leader Mao Zedong.

Chiang’s son continued to rule Taiwan after his father and began democratising Taiwan.

In 1980, China put forward a formula called ‘one country, two systems’, under which Taiwan would be given significant autonomy if it accepted Chinese reunification. Taiwan rejected the offer.

Taiwan today, with its own constitution and democratically-elected leaders, is widely accepted in the West as an independent state. But its political status remains unclear.