China has told families to stockpile food and other daily necessities after floods and coronavirus lockdowns sparked fears over shortages of essential goods.

Beijing’s commerce ministry directive on Monday stirred some concern on domestic social media that it may have been triggered by heightened tensions with Taiwan, while some said people were rushing to stock up on rice, cooking oil and salt.

‘As soon as this news came out, all the old people near me went crazy panic buying in the supermarket,’ wrote one user on China’s Twitter-like Weibo.

But this year those efforts have become more urgent, as the shoring up of supplies becomes more challenging. 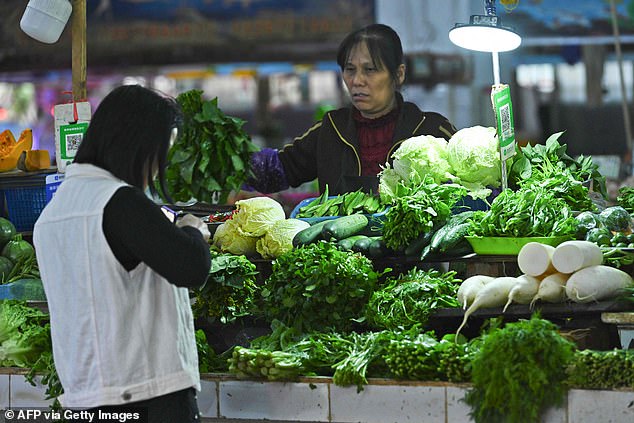 China has told families to stockpile food and other daily necessities after floods and coronavirus lockdowns sparked fears of shortages of essential goods. Pictured: A woman buys vegetables at a market in Nanning, in China’s southern Guangxi region, November 1

Floods linked to global warming have killed hundreds of people and destroyed homes, while the prices of vegetables have increased.

Meanwhile, as outbreaks of COVID-19 cases are stretching from the northwest to the northeast of the country, authorities have imposed tough new Covid lockdowns in response, leading to potential delays in deliveries.

In a sign that the government is becoming increasingly concerned over the food shortages, Chinese authorities have recently revived an anti-food waste campaign that first launched last year.

Local media has also recently published lists of recommended goods to store at home including biscuits and instant noodles, vitamins, radios and flashlights.

The public response forced state media on Tuesday to try to soothe fears and clarify the ministry’s statement.

The Economic Daily, a Communist Party-backed newspaper, told netizens not to have ‘too much of an overactive imagination’ and that the directive’s purpose was to make sure citizens were not caught off guard if there was a lockdown in their area.

The People’s Daily said the ministry issues such notices every year, but had issued its instruction earlier this year because of natural disasters, the surge in vegetable prices and recent COVID-19 cases. 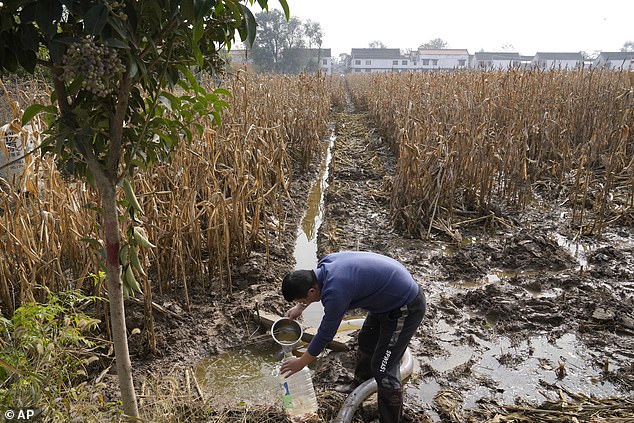 A farmer tries to drain a corn field still water logged months after torrential rain flooded the region of Zhaoguo village in central China’s Henan province on Friday, October 22, 2021. Heavy flooding and Covid lockdowns have lead to fears of shortages in the country

The ministry’s statement late on Monday urged local authorities to do a good job in ensuring supply and stable prices, and to give early warnings of any supply problems.

Last week, prices of cucumbers, spinach and broccoli had more than doubled from early October. Spinach was more expensive than some cuts of pork at 16.67 yuan ($2.60) per kg, a vegetable price index in Shouguang, a trading hub in Shandong, indicated.

Although prices have eased in recent days, economists expect a significant year-on-year increase in consumer price inflation for October, the first in five months.

The pandemic has brought an increased focus on food security, with the government drafting a food security law and outlining new efforts to curb food waste.

The commerce ministry said local authorities should buy vegetables that can be stored well in advance and also strengthen emergency delivery networks. Information about prices and supply and demand of commodities should be released in a timely manner to stabilise people’s expectations, it added.

China also plans to release vegetable reserves ‘at an appropriate time’ to counter rising prices, according to a state TV report late on Monday. It is not clear which vegetables China holds in reserves and how big those reserves are.

Some in China took to the internet to speculate over why the directive had been issued, with some suggesting Beijing was imposing emergency measures in preparation to invade Taiwan. 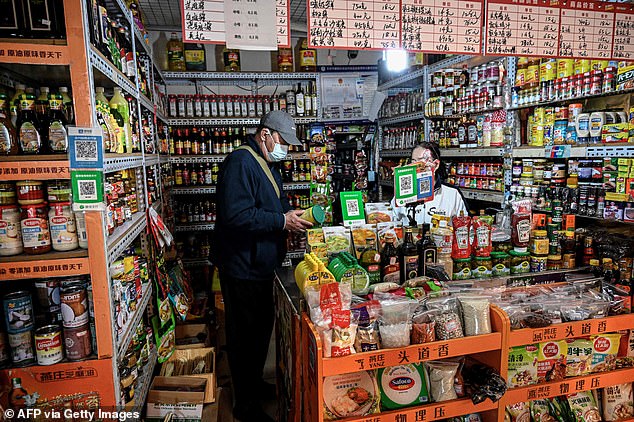 In a sign that the government is becoming increasingly concerned over the food shortages, Chinese authorities have recently revived an anti-food waste campaign that first launched last year. Pictured: A neighbourhood market in Beijing on November 2, 2021

The island country has its own democratic government, but Beijing insists it is part of its territory and has in recent months been ramping up pressure over the issue.

But in response to the speculation, state media warned against ‘overactive imaginations’ and told the public not to panic over the announcement, saying the government only wanted to ensure people were not caught off guard in the scenario of an emergency lockdown.

The state planning body has called for the timely replanting of vegetables, urging local governments to support fast-growing produce, according to the report.

China has about 100 million mu (6.7 million hectares) planted with vegetables, the agriculture ministry has said.

It’s one of the many calamities around the world that are giving urgency to the U.N. climate summit underway in Glasgow, Scotland.

‘There is nothing this year. It’s all gone,’ farmer Wang Yuetang’s said. ‘Farmers on the lowland basically have no harvest, nothing.’ 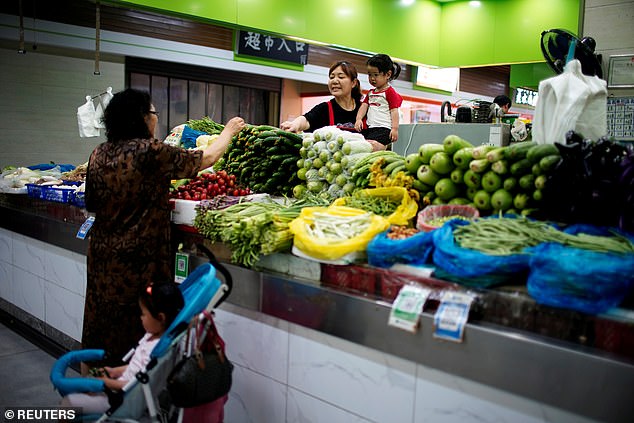 Local media has recently published lists of recommended goods to store at home including biscuits and instant noodles, vitamins, radios and flashlights. Pictured: Two grandmothers with their granddaughter trade vegetables at a market on the outskirts of Shanghai, June 3

He lost his summer crop to floods, and in late October the ground was still too wet to plant the next season’s crop, winter wheat.

The flooding disaster is the worst that farmers in Henan can remember in 40 years, Wang said, but it is also a preview of the kind of extreme conditions the country is likely to face as the planet warms and the weather patterns growers depend upon are increasingly destabilized.

‘As the atmosphere warms up, air can hold more moisture, so when storms occur, they can rain out more extreme precipitation,’ said Richard Seager, a climate scientist at Columbia University.

‘Chances are extremely likely that human-induced climate change caused the extreme flooding you saw this summer in places like China and Europe.’

China, the most populous country in the world, with 1.4 billion people, is now the planet’s largest contributor to climate change, responsible for around 28 percent of carbon dioxide emissions that warm the Earth, though the United States is the biggest polluter historically.

As world leaders take part this week in the climate summit, China is being criticized for not setting a more ambitious timeline for phasing out fossil fuels.

President Xi Jinping, who has not left China since the start of the COVID-19 pandemic and will not be attending the summit but sent a veteran negotiator, has said the country’s carbon emissions will level off before 2030. Critics say that’s not soon enough. 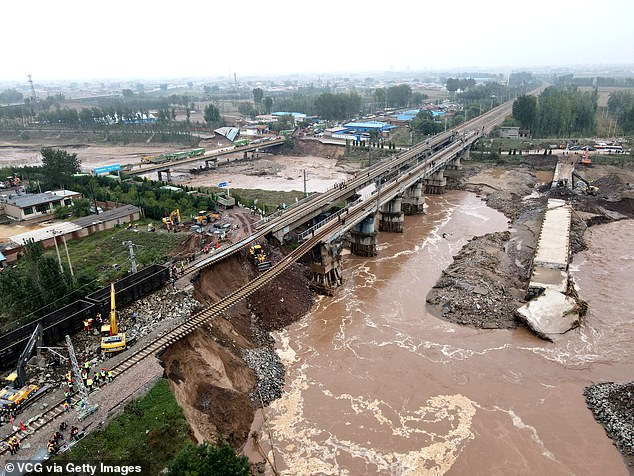 Floords in china, linked to global warming, have killed hundreds of people and destroyed homes. Pictured: Rescuers repair a bridge damaged by flooding on October 7, 2021 in Jinzhong, Shanxi Province

Top government scientists also predict an increase in droughts, heat waves and extreme rainfall across China that could threaten harvests and endanger reservoirs and dams, including Three Gorges Dam.

Meanwhile, China’s people are already suffering the brunt of climate change. And in a common pattern around the world, those who have contributed least to the warming and have the fewest resources to adapt often feel the pain most acutely.

More than 300 people died as the megacity turned into an accidental Venice, its highways transformed into muddy canals.

Even after the most dramatic storms ceased, the water continued to pool in much of the surrounding countryside, a flat and fertile region.

Henan’s economy depends on corn, wheat and vegetables, and other regions of China depend on Henan for food.

The local government reported that nearly 3 million acres (1.2 million hectares) of farmland were flooded – an area about the size of Northern Ireland – with damage totaling $18 billion.