A teenager charged over the alleged Facebook re-posting of the live stream of Friday's mosque shootings and messages "inciting extreme violence" has appeared in court.

The 18-year-old student was refused bail and remanded in custody to April 8, when he will appear in court by video-link from prison. 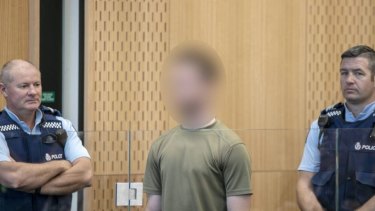 An 18-year-old has appeared in the Christchurch District Court charged with re-posting of the live stream of Friday’s mosque shootings.Credit:Stuff

Christchurch District Court Judge Stephen O'Driscoll allowed interim name suppression until that appearance but put strict limits on what the media contingent was allowed to report.

In New Zealand, most details of bail hearings are suppressed under the Bail Act, though the outcome is allowed to be reported. Judge O'Driscoll made orders that banned publication of details from the police summary of facts and the document and submissions in which the police opposed the man's release on bail.

He allowed the media to report the outcome of the hearing and the remand details, and also the details of the charges.

One charge is dated March 15, the day of the shooting. It alleges an offence under the Films, Videos, and Publications Classifications Act by distributing an objectionable publication – a live stream of the murder of multiple victims at the Deans Avenue Mosque.

The other charge alleges an offence between March 8 and March 15, under the same act, by making an objectionable publication showing a photograph of the mosque in Deans Avenue with the message "Target Acquired" and further chat messaging around inciting extreme violence.

The teenager originally faced a charge of publishing insulting material with intent to excite hostility or ill will against a group of persons on the basis of race, ethnicity, or national origins, but the police withdrew that charge on Monday and replaced it with the other charges.

At the request of the police, the public gallery was cleared and the court sitting went ahead with only media present. The defence accepted the closure.

Judge O'Driscoll also suppressed all the submissions relating to name suppression. He allowed the man to be photographed and filmed in court, but the images will have to be pixelated for publication so he cannot be identified. He allowed recording of the sitting.