Controversial Christian politician loses £360,000 court battle against sister over claims she ‘manipulated’ their late mother to get a bigger share of estate

A controversial Christian politician has lost a court fight with his equally religious sister over claims she tried to get their frail mother to change her £360,000 will, and to ‘turn her against him’.

Christian Peoples Alliance leader Sidney Cordle MBE claimed his elder sister Rosemary Foss made a ‘positive and deliberate attempt to turn his mother against him’ during her final years.

In her will, she gave her home to Mrs Foss, 65, who cared for her in her final years, Judge John Hand QC told Central London County Court – while her money was split two thirds to Mr Cordle and one third to his sister. 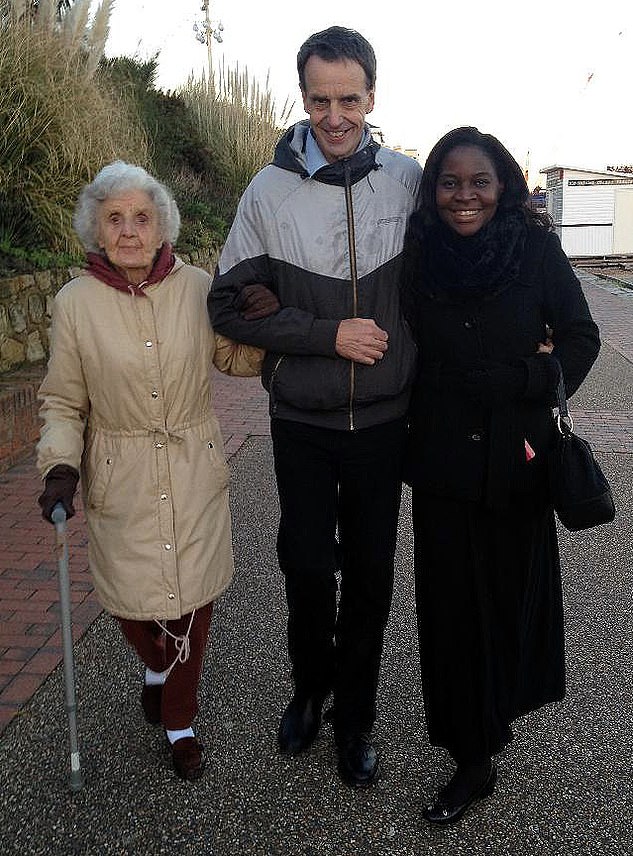 Controversial Christian politician Sidney Cordle  has lost a court fight with his equally religious sister, Rosemary Foss, over claims she tried to get their frail mother to change her £360,000 will, and to ‘turn her against him’. Above, Mr Cordle with his wife, Olubukola, and 93-year-old mother, Peggy Cordle 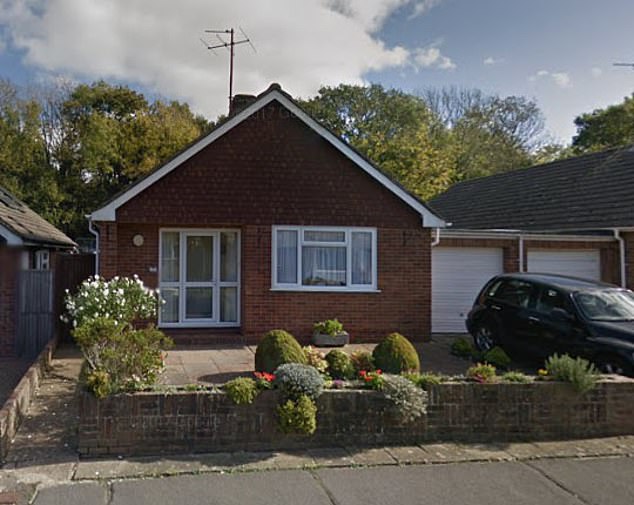 Peggy Cordle, also a committed Christian, died in 2016 leaving a £300,000 house (pictured) in The Drive, Hailsham, East Sussex and around £60,000 in cash. In her will, she gave her home to Mrs Foss, 65, who cared for her in her final years, Judge John Hand QC told Central London County Court – while her money was split two thirds to Mr Cordle and one third to his sister

But the religious siblings later clashed in court, as Mr Cordle, of Belvedere, Kent, tried to get his sister removed as joint executor of Peggy’s will.

Mr Cordle, 63, who has been leader of the CPA since 2012 and hit the news in 2014 over his comments on gay marriage, claimed Mrs Foss was no longer fit to act as executor.

Representing himself, he claimed his older sister ‘manipulated’ their mother and even used the old lady’s cash for her own benefit.

He can no longer work with his sibling, he said, claiming that ‘the administration of his mother’s estate has come to a standstill’.

But Judge Hand has now thrown Mr Cordle’s case out, handing victory to his sister.

Mr Cordle, who has been in politics for 40 years, previously served as a city councillor in Sheffield and has also run for Parliament.

His party has taken a tough stand on marriage, abortion and protecting persecuted Christians overseas.

He hit the headlines back in 2014 due to his strong and outspoken views on gay marriage legislation. 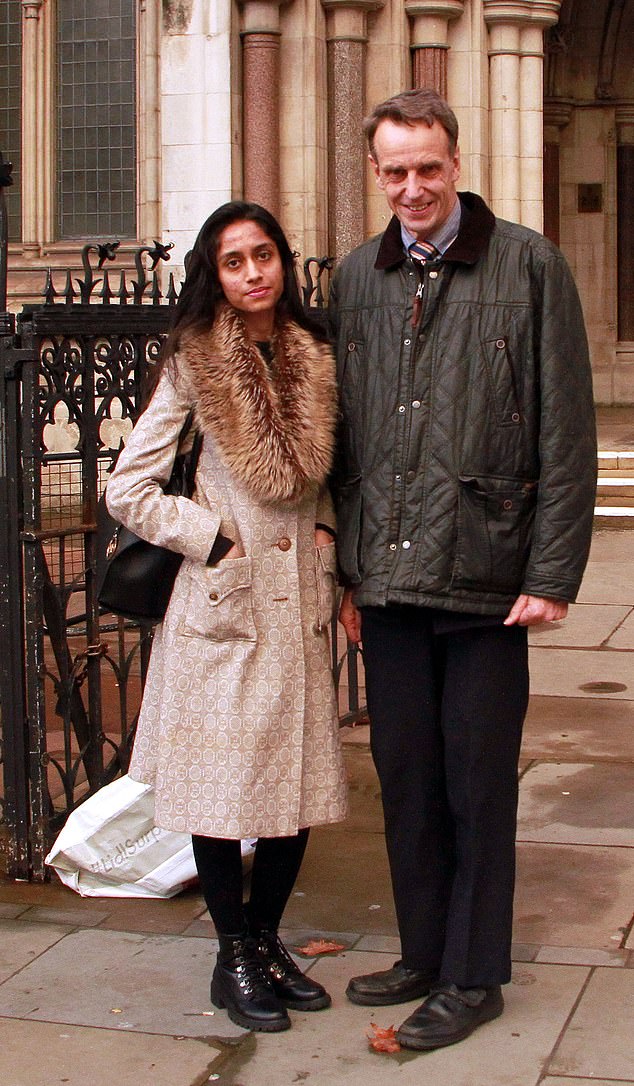 Sidney Cordle, 63, claimed in his recent court battle that Mrs Foss was no longer fit to act as executor. He has been leader of the Christian Peoples Alliance since 2012, and hit the news in 2014 over his comments on gay marriage. Above, Mr Cordle outside court, with an assistant

His sister, Rosemary, is an equally fervent Christian and heavily involved in charitable works overseas.

After a highly-charged four-day trial, Judge Hand flatly rejected his claims against Mrs Foss, and refused to strip away her role as executor.

The judge accepted that their mother was increasingly frail in her last years, but pointed out that in 2015 Peggy’s GP had confirmed she was ‘still capable of managing her own affairs’.

And although Mr Cordle said his mother became ‘secretive’ about her finances in her old age, the judge commented, ‘That may be so but that was her prerogative’.

Mrs Foss had lived with and looked after her mother in her twilight years, the court heard, and the two were very close.

‘Both of them had a strong religious faith and relied on God to guide the decisions they made on a daily basis,’ he added.

What is the Christian Peoples Alliance?

It was established in its present form in 1999, having grown out of a cross-party advocacy group called the Movement for Christian Democracy.

Mr Cordle has been its leader since 2012.

He hit the headlines in 2014 due to his strong and outspoken views on gay marriage legislation.

In the 2017 General Election, its manifesto included policies against same-sex marriage and abortion.

According to the CPA website: ‘The Christian Party Alliance seeks to demonstrate God’s love and God’s holiness and truth in the political world.

‘Our core values are promoting marriage and family stability, upholding the sanctity of life from conception until natural death, supporting persecuted Christians worldwide and caring for the poor and needy.

‘In this way, we believe we are proclaiming the Lordship of Christ.’

‘But nothing Rosemary did comes anywhere near to amounting to undue influence,’the judge found.

Mr Cordle challenged his sister to explain why she had ended up with a new car which he said was paid for by their mother.

He also queried the installation of solar panels at his mother’s home, which he claimed only his sister would benefit from.

There was also evidence that his sister had ‘attempted to get their mother to change her will’, said Mr Cordle – a claim which was turned down in court.

‘His complaint was that he suspected his sister had taken to controlling their late mother’s financial affairs and had used her money for her own benefit,’ the judge explained.

‘He says his sister has always been motivated by a determination to reduce the amount of money in the estate to which he might be entitled,’ the judge explained.

Mrs Foss had ended up inheriting a house ‘enhanced by the addition of solar panels’, her brother claimed.

‘But there is absolutely no realistic basis for suggesting that she misconducted herself in respect of these matters,’ the judge noted.

Mrs Foss, who quoted the Bible against her brother in support of her case, insisted there was no reason to remove her as executor of their mother’s estate.

And she challenged Mr Cordle to account for a loan of £17,000 his mother had made to him in 2011, which he claimed Peggy had ‘forgiven’.

Some of the cash had also been repaid, the court heard.

Judge Hand ruled against Mr Cordle on the loan and told the court: ‘I reject his evidence, in my judgment the loan is still outstanding’.

Nor was there any reason to dismiss Mrs Foss as executor, he found.

At one point, Mrs Foss had claimed £40,000 compensation from her mother’s estate for ‘the time spent by her in caring for her mother in the years before her death’.

She partly justified her claim with a passage from St Luke’s Gospel which reads: ‘a workman is worthy of his wages’.

But she later withdrew her application.

Judge Hand, rejecting Mr Cordle’s case, said of Mrs Foss: ‘She and her husband regard God’s law as paramount but I don’t regard that as a basis for removing her as executor’.