The RACV argues more money should be spent on bicycle lanes because they actually eased traffic congestion. 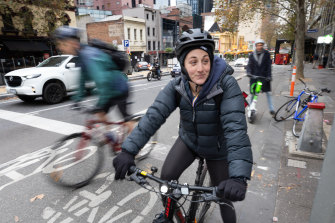 “If more people are riding a bike, then you can move three more times the number of people than you can with one car,” said Elizabeth Kim, the RACV’s general manager of mobility.

“[Bike lanes] can actually improve congestion if more people travel by bike than with cars.”

World Bicycle Day was marked on Friday by renewed debate about inner-city cycling, after The Age revealed the City of Melbourne would “pause” the rollout of new protected lanes in the CBD.

The council has built 19 kilometres of protected bike lanes over the past two years – and 71 kilometres more are planned by 2030 – but there was outcry from business owners and some residents, who said they were not consulted about the impact on retail and restaurant truck deliveries. 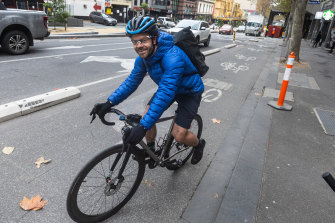 The Transport Workers Union said the removal of safe loading zones without consultation had caused severe disruption for delivery workers. Lanes on Queens Bridge Street and Exhibition Street have been particularly contentious.

Melbourne University urban planning professor Dr John Stone said there would always be “teething problems” to work through and suggested changing the timing of deliveries to avoid peak hour and reducing on-street parking.

“New York, Berlin, Tokyo… all those cities managed to have much, much higher shares of people not using their cars and the city still functions, so there are solutions to all of these things.”

“But I think anybody who’s wanting to rip up bike lanes, open new car access, open extensive car parking, they are just going in the wrong direction.”

Professor Jago Dodson, the director at RMIT’s Centre for Urban Research, said the City of Melbourne could turn some traffic lanes into loading zones and also ban private vehicles from some streets.

“Once you remove that, then you’ve actually got quite a lot of space to work with that can accommodate the needs of people who really do need to access the cities, such as cyclists and delivery vehicles,” he said.

Along with the City of Melbourne’s 90 kilometres of planned lanes, the state government is funding 100 kilometres of “pop-up” bike lanes in inner-city suburbs, with 23 kilometres already installed in Darebin and Yarra.

Deputy transport portfolio lead at the City of Melbourne, Roshena Campbell, said her personal view was that the bike lanes were a failed experiment.

“The bike lane rollout strategy has been done in a bit of a bubble that has no regard to the impact on whether or not it deters people coming into the city,” she said. “At a time when the city is on its knees, we cannot make it difficult for people to come in.”

But Greens councillor Rohan Leppert said the city committing only $18 million to cycling infrastructure over the next four years, while Sydney was spending $69 million, showed the idea Melbourne had overdone its cycling blitz was “nonsense”.

“Compared to cities around the world, we’ve been doing the bare minimum,” he said. “At the state level, it’s even more stark”.

The NSW government has committed $950 million for walking and cycling infrastructure over the next five years. Its newly created Active Transport Minister, Rob Stokes, has said that would probably need to double.

Victoria’s state budget has only committed $72 million to similar projects over the next four years.

A spokeswoman for Victoria’s roads minister Ben Carroll said the City of Melbourne’s bike strategy “is a matter for them” and that the state was working to ensure “there is a safe place for everyone on the road” – whether they are travelling by car, truck, bike or foot.