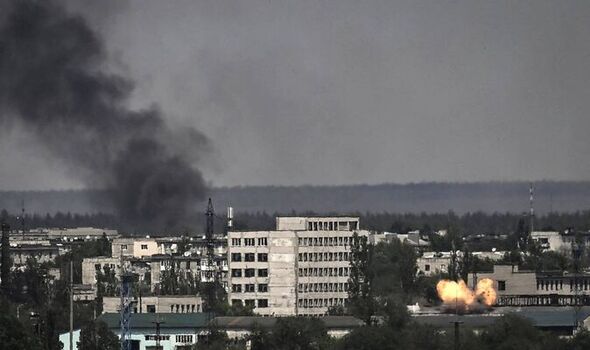 Vladimir Putin’s commanders are “throwing everything” at the city in the eastern Luhansk Oblast region, which has seen 90 per cent of homes damaged and is entirely without electricity or water, authorities said. But British intelligence suggests that the cost to the Kremlin of securing Severodonetsk – which it sees as a vital communications hub – has been extremely heavy due to fierce fighting from the Ukrainian army.

He added that a lack of experienced command- ers was “likely to result in a further decrease in morale and continued poor discipline”.

Ukraine is also suffering heavy casualties, and Yuriy Sak, an adviser to the country’s defence minister, warned that Russia was “trying to encircle and destroy small pockets” of Ukrainian troops.

He said: “The situation seems to have been stabilised by Ukrainian armed forces, they are defending the areas they hold.

“The Russian aggressors have much more fire power, much more heavy artillery, they’re pummelling those areas 24/7 without stopping, and of course they’re hitting civilian houses, civilian infrastructure. The situation is very, very serious.”

Authorities in Severodonetsk said the bombardment was so intense that they were no longer counting the number of casualties.

Military expert Prof Michael Clarke, of King’s College London, said that Ukraine faces a crucial decision about whether to try and save Severodonetsk – which he said would soon be surrounded on all sides – or withdraw to safer ground further west.

“They seem to want to fight it out,” he added. Putin’s Foreign Minister Sergei Lavrov said that taking control of “the Donetsk and Luhansk regions, recognised by the Russian Federation as independent states, is an unconditional priority”.

He also denied speculation that Putin was ill. In an interview with French TV, Mr Lavrov said that the Russian leader appeared in public every day, and no “sane person” would see any signs of an ailment.