Climate protesters storm Ted Cruz interview on The View as Whoopi Goldberg leads liberal hosts ganging up on the Texas GOP senator over Jan 6, the economy and Trump calling his wife ‘ugly’

Climate activists tried to drown out Republican Sen. Ted Cruz during a heated appearance on The View Monday morning.

Co-host Whoopi Goldberg told the protesters to leave as they condemned the show for a lack of coverage on climate.

Several minutes later, an audience member appeared to yell ‘f*** you, Ted Cruz,’ prompting the show to go to commercial.

Cruz had said he believed the Republicans would retake both the House and Senate in the midterms in a ‘tidal wave’ because ‘People at home are saying, “OK, is my life better than two years ago?” And I think for the vast majority of Americans the answer is no.’

The outbursts came during an appearance with Cruz where the hosts pressed him on backing former President Donald Trump, his bid to overturn the election, riots in Democratic-run cities across the country and January 6.

They also criticized Cruz’s new book Justice Corrupted: How the Left Weaponized our Legal System, which hits the shelves tomorrow and interrogated him about still supporting the former president even though he called his wife Heidi ugly and said his father may have been involved in the assassination of JFK.

They gave him little opportunity to respond as he touted Republican records on the economy and crime and criticized the Biden administration.

The interview went off the rails quickly when co-host Ana Navarro said the audience gave Cruz a ‘better reception than Yankee fans,’ who booed him when he showed up to watch them play the Houston Astros in New York on Monday night. 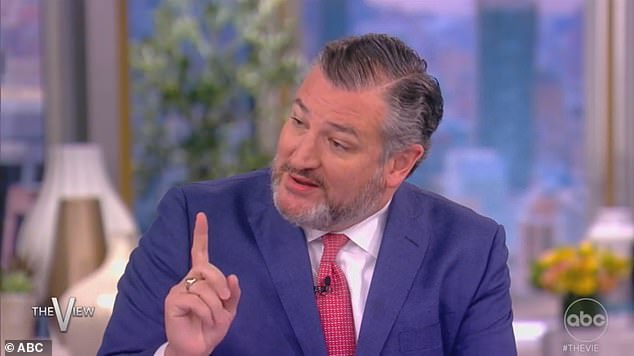 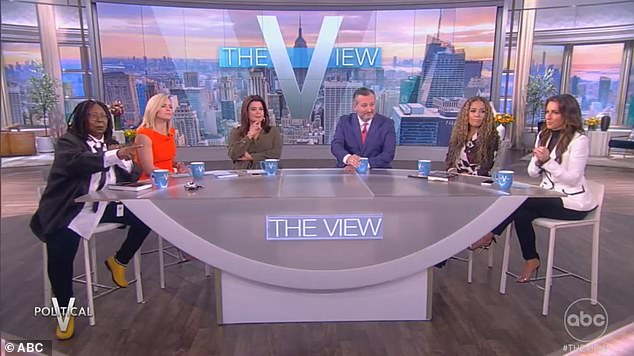 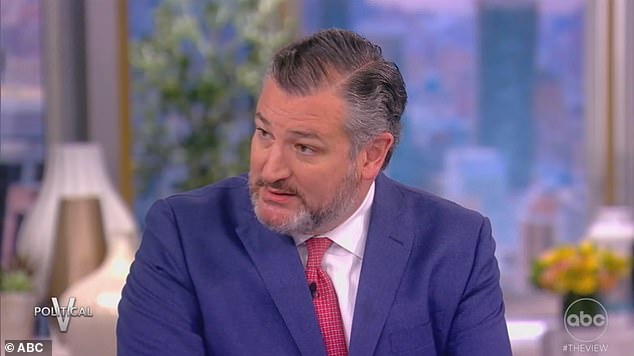 It came during a fierce appearance from Cruz where the hosts pressed him on backing Donald Trump, his bid to overturn the election and January 6

Cruz then when on to explain the Republican priorities – ‘life, liberty and security’ – and criticized the Democrats for not focusing on the economy.

Co-host Alyssa Farah, who worked in the Trump White House before turning into a critic of the ex-president, joked, ‘They weren’t even protesting you.’

‘I take back what I said about the Yankees fans,’ Navarro joked.

Co-host Sunny Hostin continued with the interview, telling Cruz she didn’t know what the Republican Party stood for and said it was ‘hypocritical’ to say the traditional family values because of the party’s continued support for Trump.

‘It’s very simple. I’ll give you three words – Jobs, freedom and security. When you cut taxes and reduce regulations, when small businesses expand, you have lots and lots of jobs,’ Cruz replied. 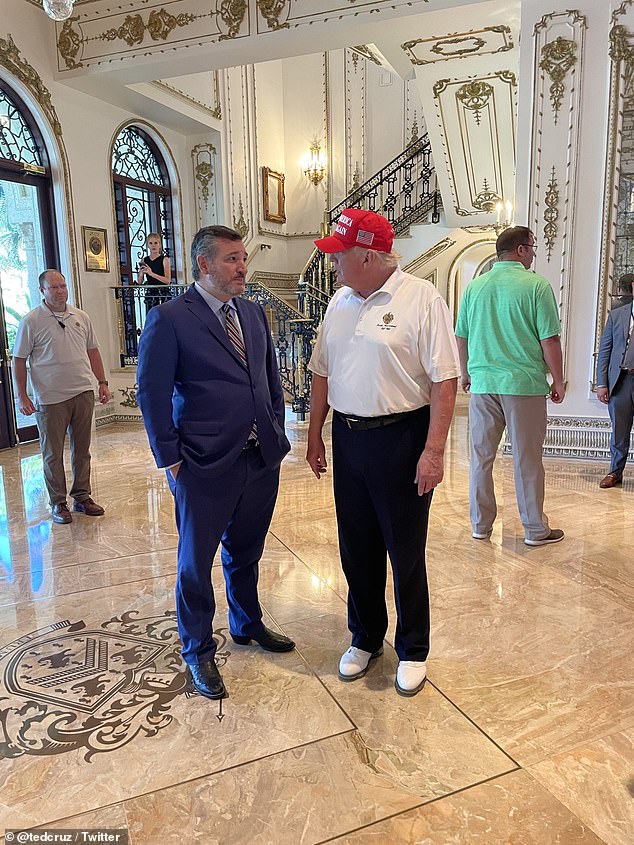 Sen. Ted Cruz (left) photographed with former President Donald Trump (right) at Mar-a-Lago said that it was his job to get along with Trump after in 2016 Trump called Cruz’s wife Heidi ugly and suggested his father played a role in JFK’s assassination

When he predicted that the Democrats would lose their Congressional majority, that’s when he got shouted down again – and the show was forced to cut to commercial.

After the break, Navarro apologized for the treatment Cruz received.

‘I have been very vocal and very critical of you, but I’m sorry that this has happened in our house,’ said Navarro, a Bush Republican who is a prominent Trump critic.

Navarro then recalled how Trump ‘went incredibly personal’ with Cruz when the two were running against each other for the 2016 GOP presidential nomination.

‘He suggested that your father may have been involved in Kennedy’s assassination and he called your wife ugly,’ Navarro recounted.

Navarro then showed a clip to Cruz where he says Trump is ‘utterly immoral.’

Cruz shot back calling it a ‘loaded question.’

The Texas senator said that Republicans had a 2016 primary where ‘Donald Trump and I beat the living crap out of each other.’

‘I’ll tell you Heidi laughed when he said that, my father laughed – my dad didn’t just kill Kennedy, he has Jimmy Hoffa buried in the backyard. It was idiotic,’ Cruz said.

Cruz argued that in order to do his job representing Texas he had to make nice with Trump.

‘And why did I choose to work with him even though I was pissed off at what he said, because I had a job to do and responsibility,’ Cruz said, earning some applause.

Cruz was later pressed by Farah, who recalled how she had tried to get her bosses at the time, conservative members of the Republican Party, who are members of the House Freedom Caucus, to back his 2016 bid against Trump.

‘I thought you were the true conservative who could defeat that man,’ she said. ‘He won. I ended up going on to work for him. I’ve made my peace with that decision, but January 6th is something I have a really hard time moving beyond from.’

‘But they didn’t storm the Capitol, they didn’t try to kill my former boss,’ Farah protested, a nod to former Vice President Mike Pence.

‘We may not like when Republicans win, but we don’t go and we don’t storm,’ Goldberg added.

Cruz then whipped out a piece of paper to read comments made by Democrats challenging election results.

Both Clinton in 2016 and Gore in 2000 won the popular vote, but lost the election due to the Electoral College.

The interview continued to go off the rails until the very end, with Goldberg having to cut off Cruz’s final points.

‘I’m sorry, I was trying to tell you I had to go,’ she told the Texas Republican.

Cruz went on The View after he was booed by Yankees fans Monday night as he appeared in the Bronx.

Photos also showed several spectators flipping the bird at the Texas Republican senator, while one gave him a resounding thumbs down.

But Cruz – wearing a bright orange shirt to match Astros colors – got the last laugh as he watched Houston advance to the World Series again. 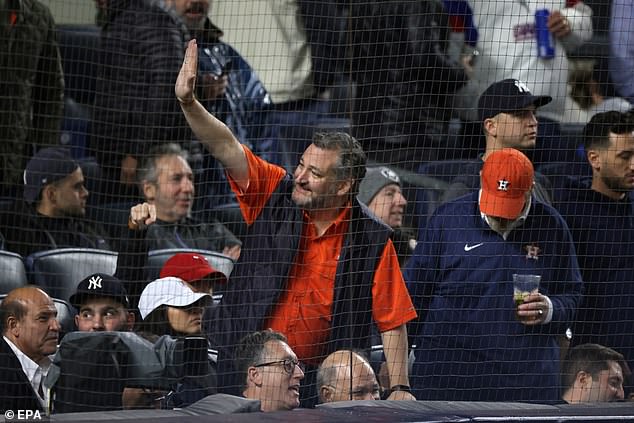 Ted Cruz was roundly booed by Yankee fans last night as he appeared in the Bronx to support the Houston Astros in their down-to-the wire victory. Pictured: Senator Ted Cruz of Texas waves during the fourth game of the American League Championship Series between the Houston Astros and the New York Yankees at Yankee Stadium, October 23 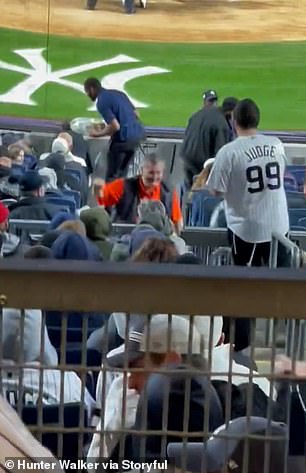 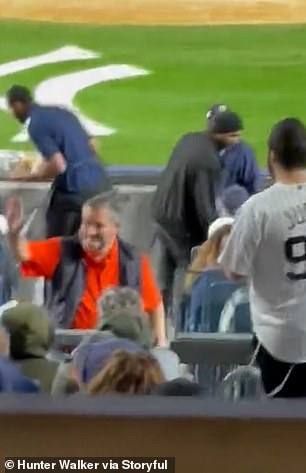 Pictured: Cruz waves to the crowd but is met with loud boos from those sitting behind him

Beach bummer: Half of world's sandy coastlines may vanish this century