Doggy deadlock! Stubborn spaniels are frozen like statues with their jaws clamped on a chew toy in comic tug-of-war

This is the moment a pair of stubborn cocker spaniels became like ‘statues’ as they clamped hold of a chew toy in a comic tug-of-war.

When Alison Watson, 59, gave her 14-month-old dog Marmite a chew toy, three-year-old Nutmeg didn’t want to be left out and decided he wanted the treat too.

In footage taken at home in Bristol, the hard-headed canines can be seen with their teeth clamped around the flavoured chew toy while sitting on Alison’s husband Peter’s legs.

While retired audiologist Alison walked around her dogs, the pair barely even blinked as they were caught in a battle of wits over who would drop the chew first. 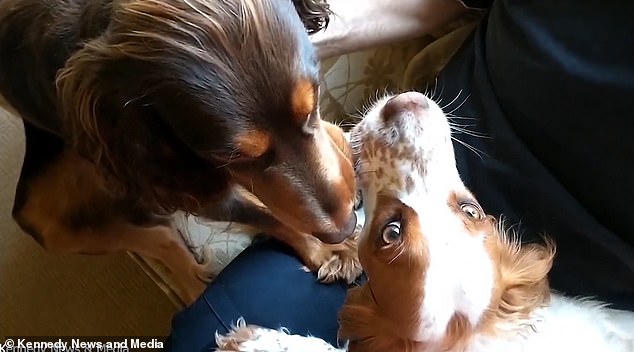 Alison Watson, 59, from Bristol, gave her 14-month-old dog Marmite (left) a chew toy but three-year-old Nutmeg (right) didn’t want to be left out

With their paws planted firmly on civil servant Peter, 54, neither of them gave an inch as they continued to hold on to their end of the food.

Alison said: ‘They were like a pair of statues just sitting there. They’ll play tug of war regularly but never like this. The way they were so motionless really got me.

‘It was like two children fighting over the same toy. Neither of them wanting to give an inch. 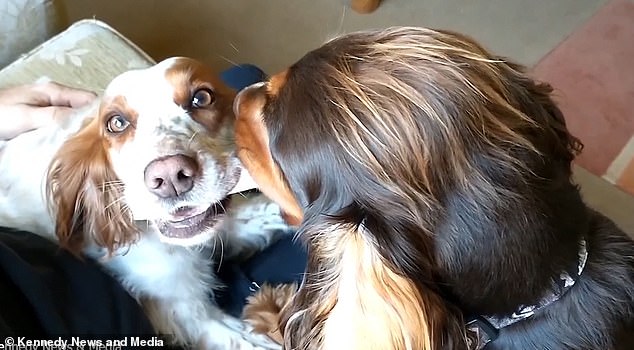 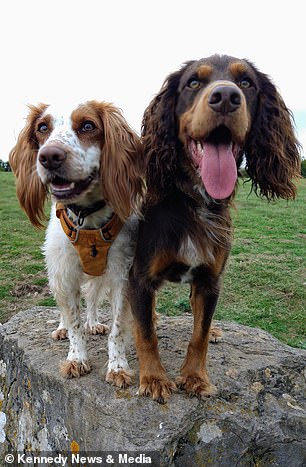 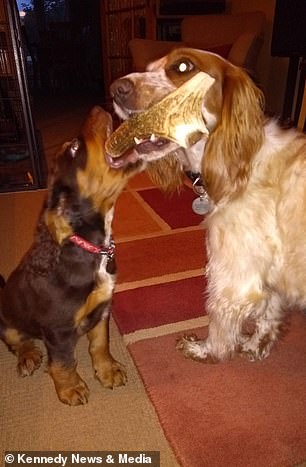 Alison said that Nutmeg always wants the toy Marmite has, no matter whether there are others around. Pictured right: Marmite and Nutmeg fighting over an antler when Marmite was a puppy

‘They stayed like that for a good few minutes. They only stopped because Peter stood up and it was only then that they jumped off the sofa.

‘I’ve no idea when they would have stopped otherwise. They could still be going now for all I know.

‘In the end, the chew ended up on the floor abandoned. Because Peter had moved, that was far more exciting than the toy.’ 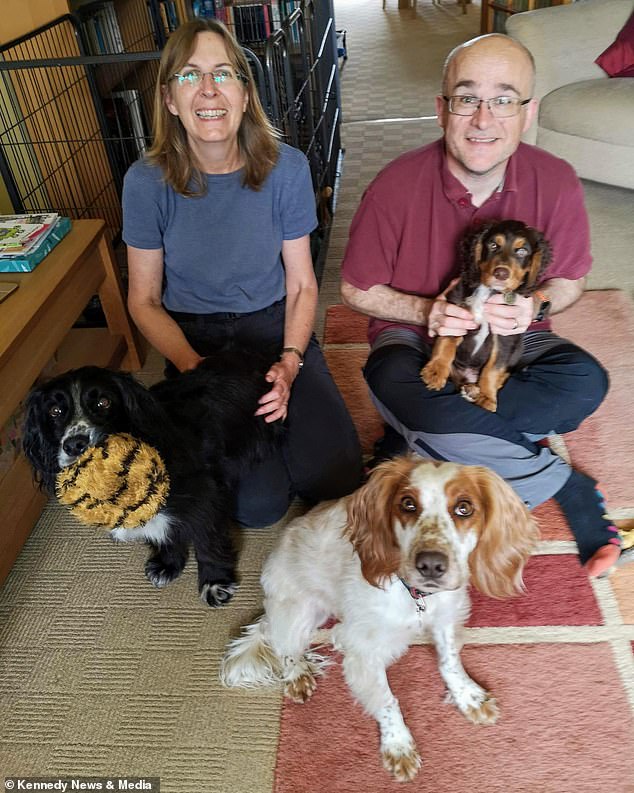 Alison and Peter have a third dog called Tesla (left), who is seven, but Alison said he is ‘far too mature’ for Nutmeg (middle) and Marmite’s games

Alison and Peter have a third working cocker spaniel, seven-year-old Tesla, but he doesn’t get involved in Nutmeg and Marmite’s high jinks.

Alison said: ‘Tesla is far too mature for their silly games.

‘They all get on really well together and have done since we brought Marmite home. They’ve always played together.

‘However, Nutmeg always wants the toy Marmite has at that time, regardless of whether there are others around.’