Christmas could be cancelled in Europe: Ireland tells expats not to come home and France warns of its own travel restrictions during festive period

European leaders have warned that Christmas won’t be the same and could be cancelled altogether amid strict coronavirus lockdowns across the continent.

Ireland’s chief medical officer has warned people not to fly home for the holidays amid fears they will ‘re-import’ the virus from overseas hotspots in the UK, Europe and United States.

Meanwhile Prime Minister Leo Varadkar said it was ‘too early’ to tell whether people would be allowed home for the holidays, advising them not to book flights yet.

French Prime Minister Jean Castex and German Health Minister Jens Spahn also issued similar warnings, saying that people should not be planning large gatherings and that restrictions may be in place over the festive period.

Even in lockdown-free Sweden, virus expert Anders Tegnell was forced to admit that travel restrictions may change suddenly before the festive period, and that it is too early to start making plans.

He also warned against planning large parties, saying that he plans to celebrate Christmas with a small group of his closest family. 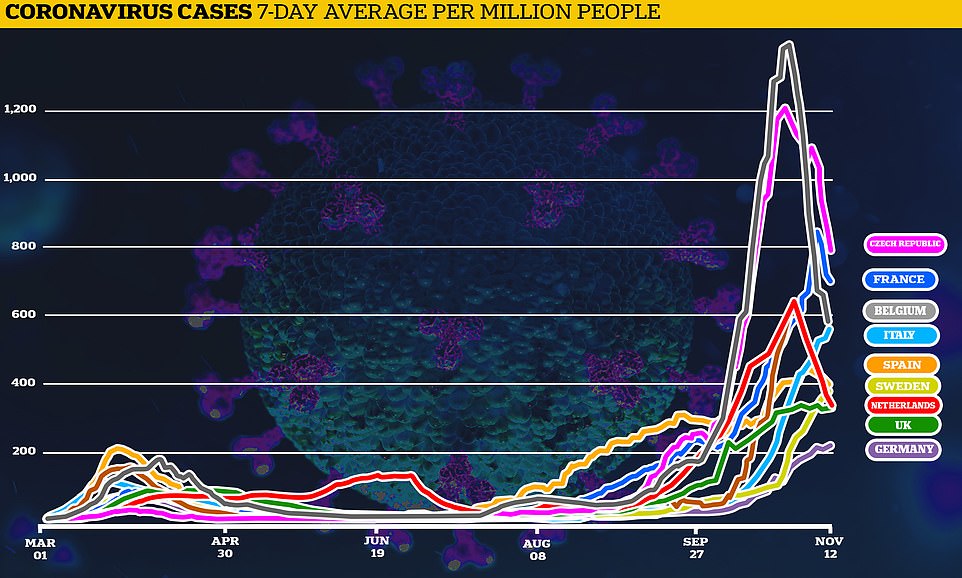 Coronavirus cases have begun falling in some European hotspots after lockdowns were introduced, even as leaders and health experts warned they might not be falling fast enough for Christmas celebrations to take place 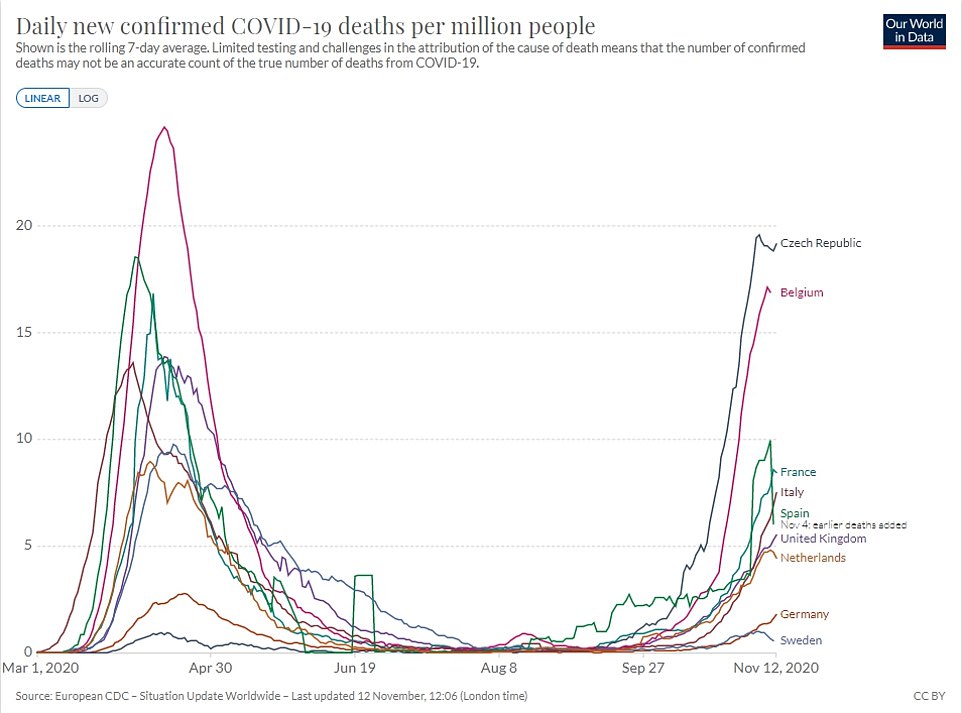 Deaths from coronavirus – which typically lag two weeks behind case rises – are still increasing across most European countries, with France warning that one in four deaths is now due to the disease 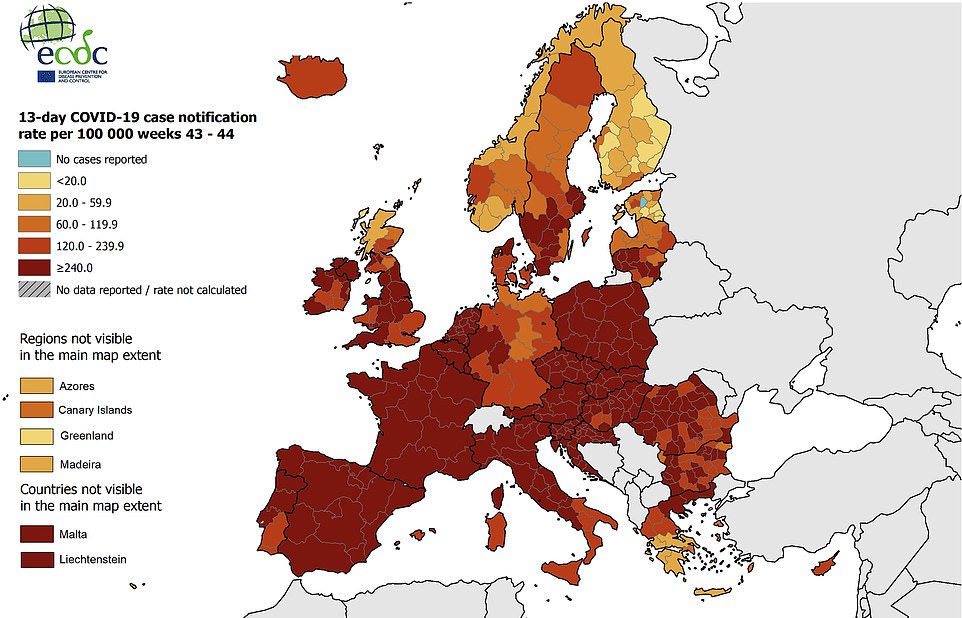 The European Center for Disease Control has warned that transmission of the virus is still high across the continent, with the effect of new lockdown measures not yet showing in the data

The warnings came as virus cases on the continent continued to spike, even after harsh new lockdown measures were put in place to combat a second wave of infections.

Following the German announcement, Spahn said it was ‘too early to tell’ whether additional measures introduced on November 1 – including the closure of all bars and restaurants – was doing enough to curb virus cases.

Spahn warned that it was unlikely life would go back to normal in December and said winter events like office Christmas parties, birthdays and wedding were unlikely to go ahead.

‘We never said that November would be so hard and then everything would be like before.’

Bavarian premier Markus Soeder also cautioned against lifting curbs too quickly, saying: ‘If we just lower the numbers a little bit now and stop too soon, we might fall into a constant alternation of lockdown and opening.

‘That would be hard for people to understand. Therefore, we have to continue with the treatment we have started until successful.’

Meanwhile in France, Mr Castex gave an update on the country’s new full-scale lockdown Thursday – two weeks after people were all-but banned from leaving their houses, except for essential activity. 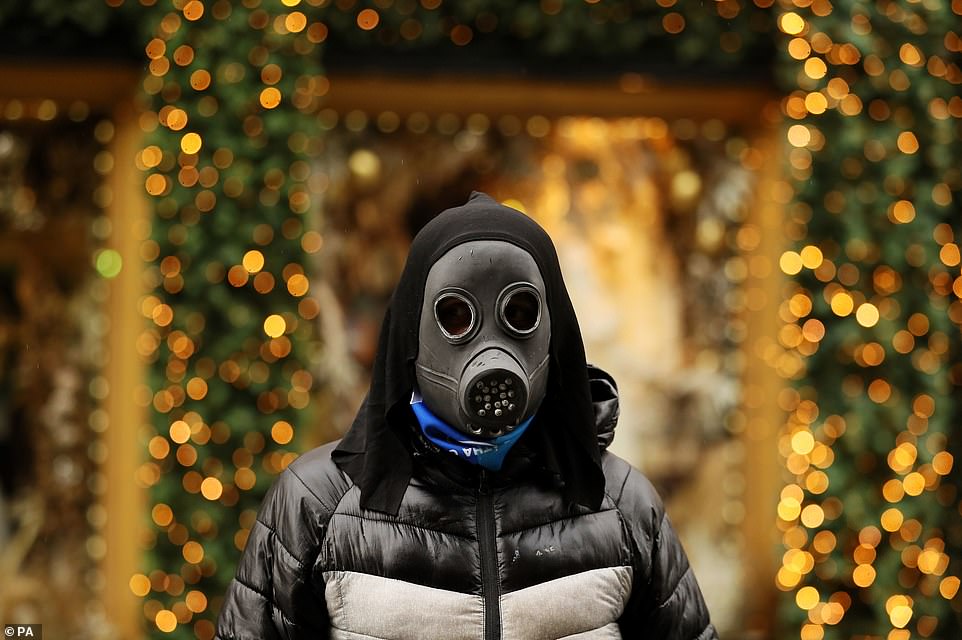 In Ireland, ministers and health experts have warned that people might not be allowed to travel home for Christmas amid fears they will bring the virus with them from hotspots in Europe and the US (pictured, a mask-wearing man in Dublin) 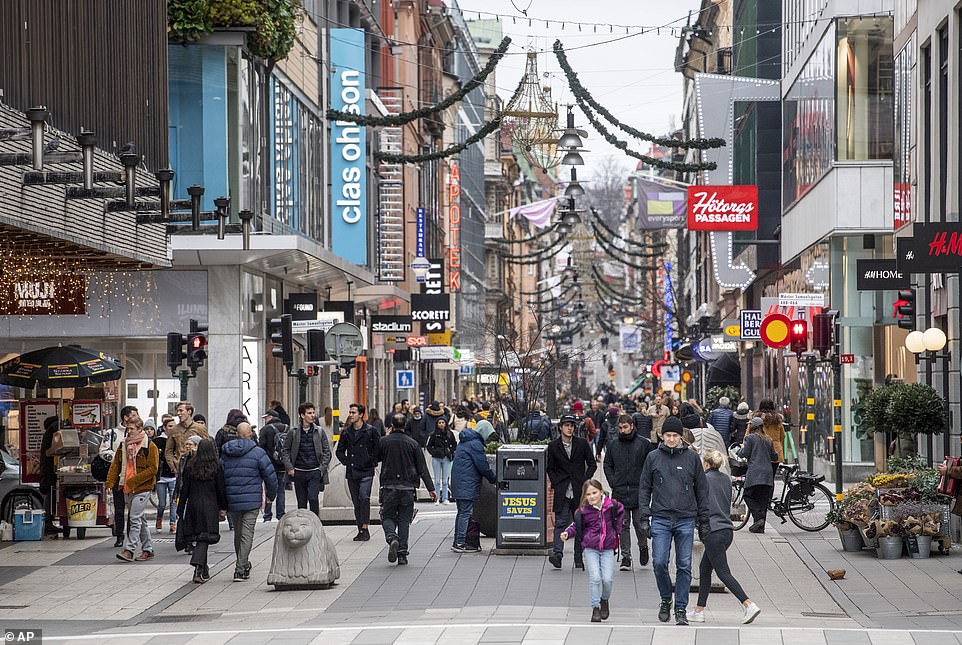 Even in lockdown-free Sweden (pictured, central Stockholm) the country’s top virus expert has been forced to admit that travel over the festive period might not be allowed, and advised people to plan small gatherings 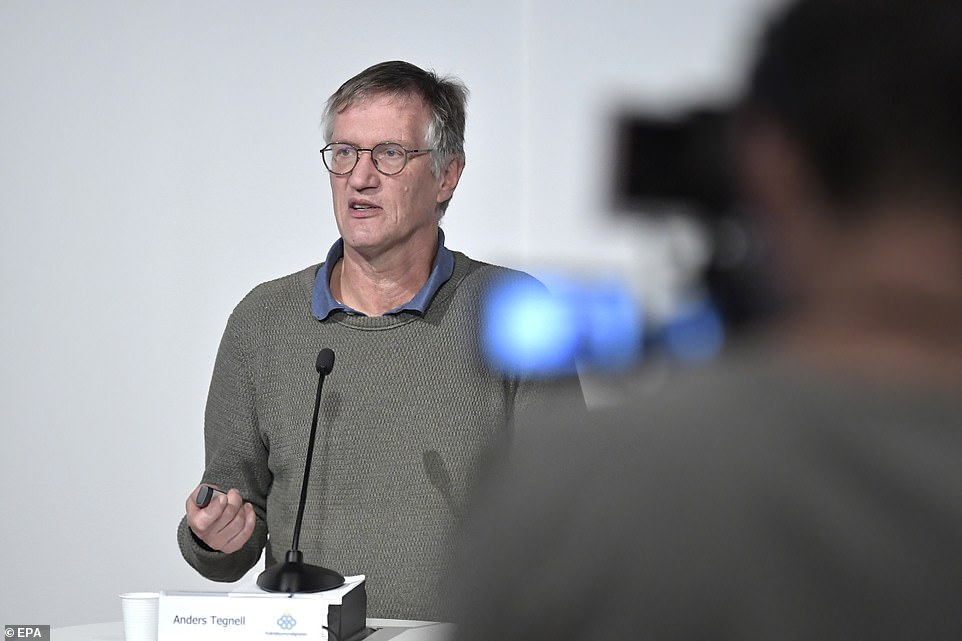 Anders Tegnell, Sweden’s top virus expert, was forced to admit that the country is suffering a second wave of infection that is larger than the first, having previously suggested that would not be the case

The Prime Minister revealed that hospital admissions in France are now at an all-time high, with one in four deaths linked to the virus.

But, he said, the number of people infected per 100,000 has been dropping for 10 days, and the number of virus patients is hospitals is expected to peak early next week.

‘That’s good news, but not sufficient’ to lift lockdowns just yet, Castex said as he announced that the current restrictions will continue until at least December 1.

Even after December 1, he warned that things will not return to how they were over the summer, with restaurants, bars, gyms and tourist sites will remain closed until further notice.

He also warned that people should not be planning any big Christmas or New Year’s parties. However, he said that if hospitalization rates start to slow, the government can start allowing stores selling non-essential goods to reopen in December.

Meanwhile in Sweden, chief epidemiologist Anders Tegnell was forced to acknowledge that the country is battling a second wave of the pandemic after suggesting in August such a scenario was unlikely.

‘I don’t think the definition is that important, but we see community spread in many regions simultaneously right now,’ Tegnell said.

Sweden registered 4,658 new coronavirus cases on Thursday, just below a daily record set last week, in a resurgence of the virus that has seen hospitalisations and intensive care admissions mount. 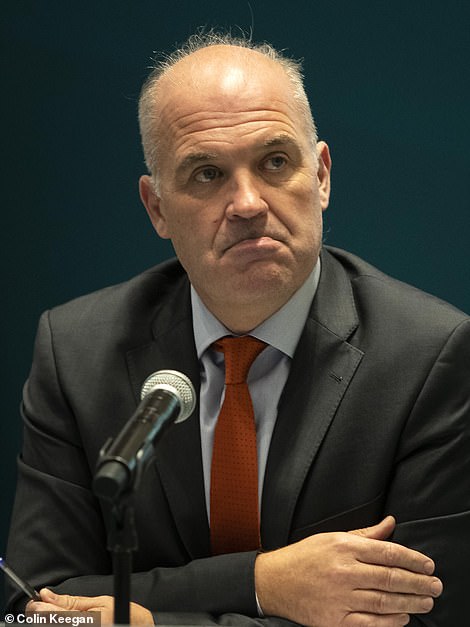 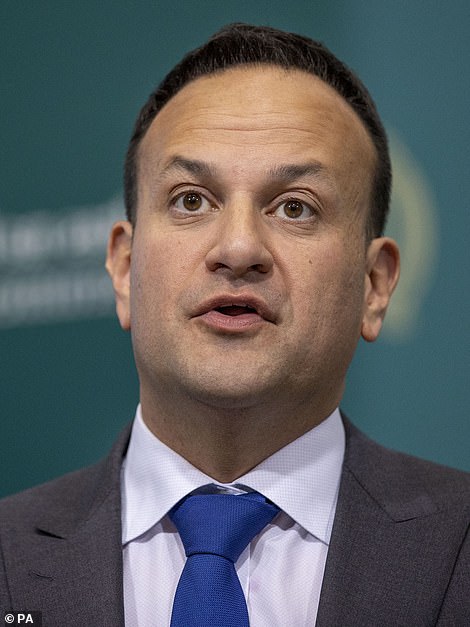 Dr Tony Holohan, Chief Medical Officer of Ireland, warned people that holiday travel will likely be considered ‘non-essential’ and banned, while Leo Varadkar (right) said it is too early to start planning trips 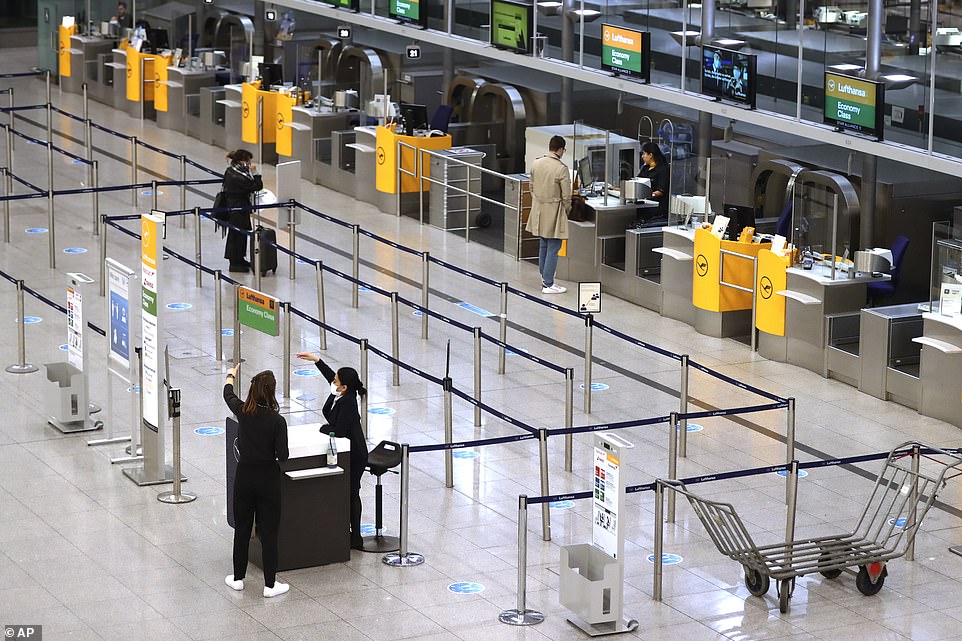 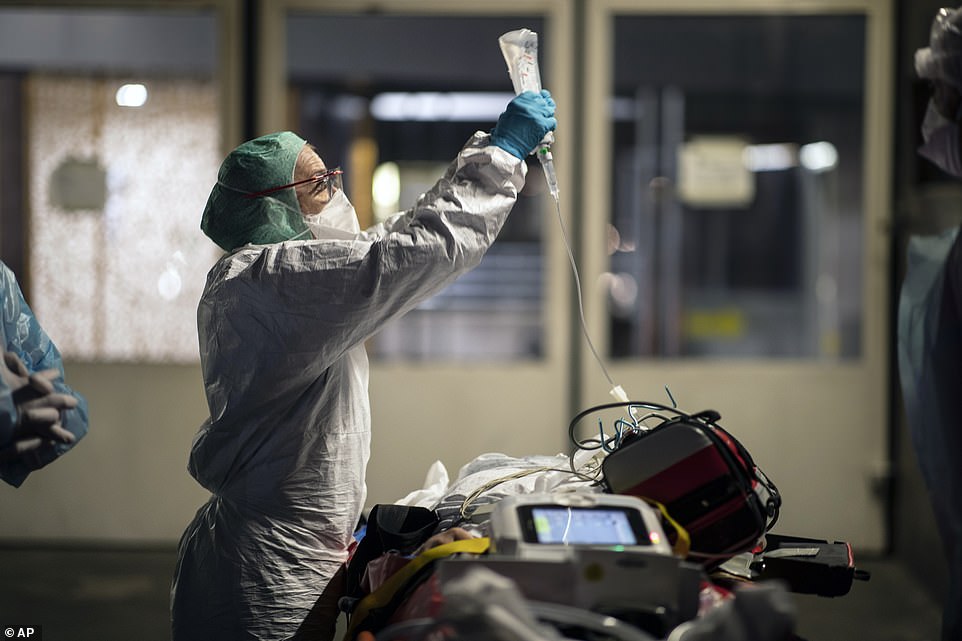 In France there are now more coronavirus patients in hospital than at the peak of the crisis in April, with one in four deaths currently attributed to the disease

Tegnell played down hopes that Sweden’s severe spring outbreak of the virus might offer sizable protection through widespread immunity, something he had previously suggested would be the case.

He also warned that travel restrictions could change between now and Christmas, and warned people not to make plans for large-scale gatherings.

‘We are working on it right now, hopefully in a few weeks we will be able to be clear about what we want,’ he said.

Speaking three weeks ago, Tegnell had warned that Christmas gatherings would likely be impacted by the virus, with older relatives having to stay away.

People should not plan large family parties with guests who travel from all over the country, Tegnell said at the time, adding that he plans to celebrate Christmas with a small group of his closest relatives.

Europe’s benchmark stock index fell on Friday, setting up to end its second straight week of gains on a glum note, as surging coronavirus cases compounded fears of the damage to the bloc’s economy in the coming winter months.

The pan-European STOXX 600 was down 0.3% by 0805 GMT after jumping earlier this week on optimism around a working COVID-19 vaccine. The index has gained about 12% in the past two weeks, also buoyed by hopes of calmer global trade under U.S. President-elect Joe Biden.

France’s CAC 40 index lost 0.1% as Prime Minister Jean Castex said there would be no immediate easing of a second COVID-19 lockdown, with the number of hospitalisations now higher than at the peak of the first wave.

In company news, French power group EDF fell 0.3% after reporting a decline in third-quarter revenue as the COVID-19 pandemic sapped electricity demand and weighed on nuclear energy output in France.