A councillor who represents one of the most deprived areas of the UK has resigned after he was slammed for moving 600 miles away to France to renovate an 18th century chateau.

Ashley Waters, 37, who ran for election as an independent and took his seat from Labour, spent much of the last year in rural Normandy rather than his home town of Middlesbrough.

Mr Waters will no longer represent North Ormesby, Middlesbrough, after he said he was faced with a slew of ‘horrific abuse’.

The former councillor previously justified continuing to represent those who voted for him in the impoverished north eastern city by attending most council meetings online – while occasionally commuting back to Teesside.

Mr Waters and his partner Terry Short are renovating Chateau De Lalacelle, near Le Mans, together with Terry’s parents Tony and Tracy Briggs. They plan to turn it into a high end bed and breakfast for paying guests. 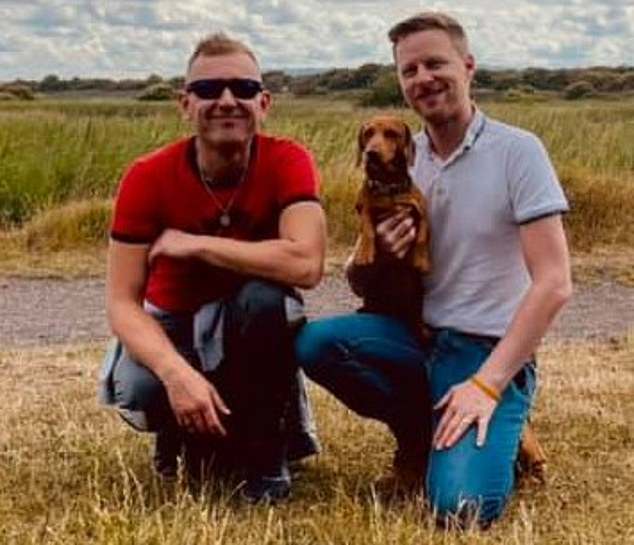 Ashley Waters, 37, who ran for election as an independent and took his seat from Labour, spent much of the last year in rural Normandy rather than his more gritty home town of Middlesbrough. Pictured, Waters (left) with his partner Terry Short

In a statement released on his Facebook page, Mr Waters said: ‘I’m sorry to say that I have decided to resign my post as councillor of North Ormesby.

‘The support from my friends, family and residents of the actual ward itself has been superb, however the constant abuse and harassment I have endured from other councillors has been horrific.

‘The posts about myself and the time I have spent in France have been complete fabrication, and any of you that met me, saw me, and interacted with me during the last eight months know that this is nonsense. Filming was done in advance for most of our videos so that I was free to return to the UK.

‘Now that I have resigned, I feel for whoever is the next target for these councillors’ abuse, as it appears with one in particular, that this has been going on for a long long time.’ 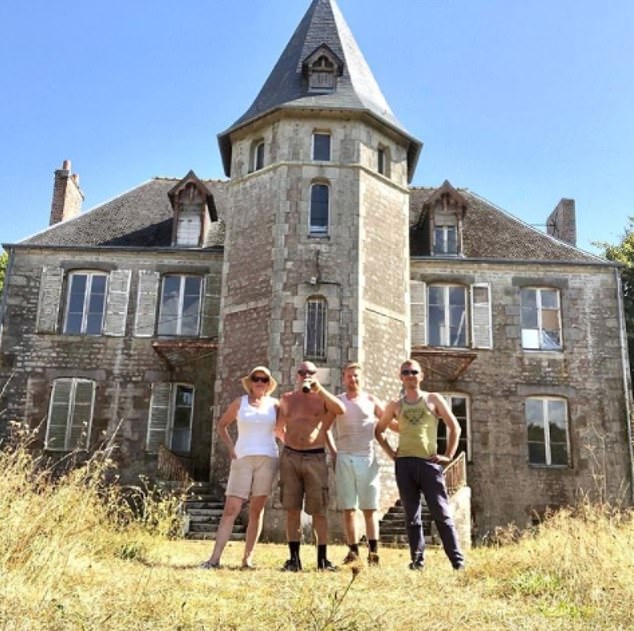 Mr Waters and his partner Terry Short are renovating Chateau De Lalacelle, near Le Mans, together with Terry’s parents Tony and Tracy Briggs. They plan to turn it into a high end bed and breakfast for paying guests

Last week Mayor Andy Preston called for the councillor to clarify how much time he had spent outside of Middlesbrough in the past six months.

Mr Waters and his partner Mr Short have been documenting their renovation’s progress with a series of self-made videos posted on YouTube with their style and content based on the long running Channel 4 series ‘Escape to the Chateau.’

Their channel, named Escape to the Dream, Restoring the Chateau, currently features 22 videos.

Mr Waters added: ‘The plan for me was to continue to live and work in the UK for the next couple of years until my term was up, and then move out to France. Now that I have resigned, I will be moving there permanently. 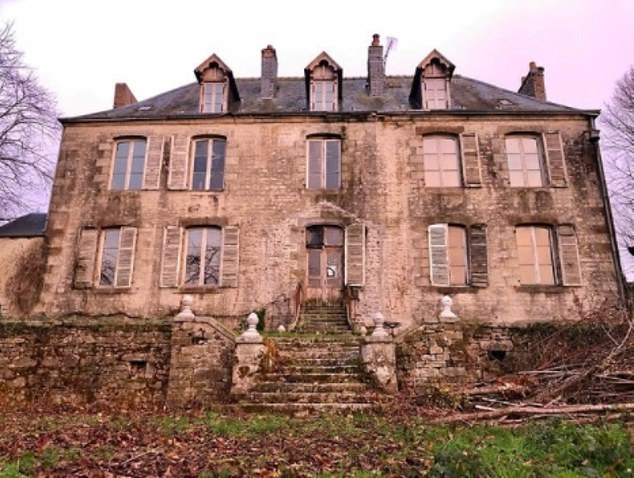 Mr Waters will no longer represent North Ormesby, Middlesbrough, after he said he was faced with a slew of ‘horrific abuse’

‘I was at least wanting to stay on to announce the new post office for North Ormesby, which Big Local have played a massive part in securing for the area.

‘Thank you to everyone that has supported me and contacting me during what has been an extremely difficult time.

‘Your support has been amazing. Thank you also to the residents of my ward, my political group, and Antony High Middlesbrough for all the support I’ve received over the past couple of years.’

Mr Waters, who was elected as an independent for the North Ormesby ward in 2019, was paid £20,000 a year in allowances for attending council meetings and related meetings of Cleveland Fire Authority.

He sat on four council committees and was formerly on the executive committee for the regeneration of Middlesbrough, recognised as one of the most deprived areas in the UK.

But Mr Waters was accused of neglecting his council duties by another independent councillor, Joan McTigue, who made repeated complaints about her colleague’s domestic arrangements, insisting he was neglecting the people he was elected to represent by being so far away.

Cllr McTigue told Mail Online: ‘He is the only councillor for North Ormesby, one of the most deprived in the country, and there is nobody looking after that area.

‘If you watch the videos it is perfectly clear that he is there for good. They refer to the chateau as “our new home, new way of life”.’

Graham Wilson, an independent councillor in a neighbouring ward, told the paper he had dozens of complaints from residents who were not able to contact Mr Waters.

One of Mr Waters’ most recent videos show him explaining how he will be repairing one of the outbuildings in the grounds of the chateau. The 30-minute video was uploaded a week ago.

Other videos feature aerial views of the chateau charting the progress from September 2020.

Another video features the renovation of an antique fireplace, while the first episode offers a tour of the property which was uninhabitable following 50 years of neglect.

The quartet, all from Middlesbrough, have been living in caravans on the site while the renovation work progresses.

Meanwhile, Middlesborough has the highest child poverty rates out of the 12 local authorities in the North East of England, according to the NE Child Poverty Commission.

Figures supplied by Middlesbrough Council show that Mr Waters has a 60 per cent attendance record for meetings and has the full approval of the council to commute from the chateau.

Mr Waters has previously defended his decision to spend much of his time at the chateau.

Mr Waters said in an interview in January this year he was able to attend online meetings and help with any problems from his constituents.

He also insisted he still owns a home in Middlesbrough and pays council tax there.

Mr Waters revealed he suffers from Crohn’s disease which affects the immune system and makes him more susceptible to contracting Covid-19 – so felt safer in the sparsely populated area around the chateau. 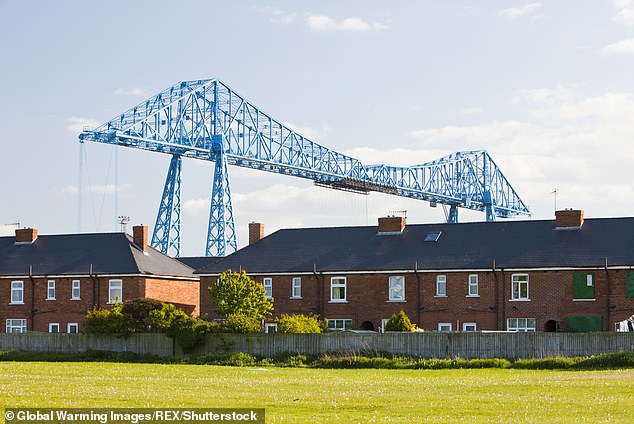 Mr Waters, who was elected as an independent for the North Ormesby ward in 2019, was paid £20,000 a year in allowances for attending council meetings and related meetings of Cleveland Fire Authority Pictured, the Middlesborough Transporter Bridge

He said then: ‘I have not had a face-to-face meeting since March 23 last year so why is it relevant where I attend meetings from?

‘Whether it be Timbuktu, France, North Ormesby or Tokyo – it’s completely irrelevant.

‘We’ve been working remotely – why does it matter right now when I can still do my job?

‘My residents still contact me, and when there are issues they get dealt with immediately like they always have done.

‘I strive to help my ward and make sure my ward is as good as it can be – I don’t know what else I’m meant to do.’

He added: ‘If the residents asked me to step down, I’d step down – she’s not a resident of mine.

‘There is no complaint from my residents – the only complaint which has been made is from Cllr McTigue. I’m doing my job.’

The YouTube videos have been viewed by more than 17,000 times with many positive comments and suggestions about the renovation work.

The TV series ‘Escape to the Chateau’ is credited with persuading many people to relocate to France and undertake renovation projects of disused homes.