CCTV footage from outside a NSW courthouse is set to play a role in a defamation case brought by a supporter of former NRL player Jarryd Hayne against the Seven Network over claims he spat in the direction of a woman who has accused Hayne of sexual assault.

Mina Greiss, who attended Newcastle District Court on May 6 last year to support Hayne, is suing Seven over an online story, Facebook post and tweet labelling him a “grub” who allegedly “stared down” and spat towards the woman outside court after Hayne was jailed for at least three years and eight months for sexual assault. 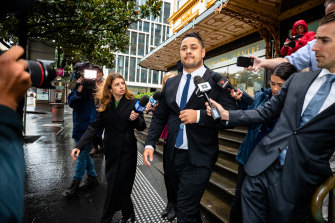 Hayne’s conviction was ultimately quashed by the NSW Court of Criminal Appeal. He was released from custody in February and faces a retrial next year.

Sue Chrysanthou, SC, acting for Greiss, told the Federal Court in Sydney on Monday that her client had received “messages and threats and abuse” following the publications and there had been a “huge response to [Seven’s] … social media posts”.

Seven, which did not name Greiss in the publications but did include a photograph of him, is seeking to rely chiefly on a defence of truth. It has said in its written defence, filed in court, that Greiss spat towards the woman’s feet “as she passed by him to exit the court precinct”.

Monique Cowden, acting for Seven, said there would be “eyewitness statements on our side saying he did commit the conduct, and the applicant [Greiss] will presumably say he didn’t”.

“This is a case that is going to turn on eyewitness evidence,” she said.

The court heard Greiss’ legal team had obtained CCTV footage from the day in question from Newcastle Court House.

Cowden said the footage was potentially relevant to “resolving this dispute readily”. Seven was open to mediation, she said, but the limited issues in dispute meant it might be easier to attempt any out-of-court resolution of the case via correspondence.

The CCTV footage had been offered to Seven at one stage, Cowden said, and they had “sought it”, but “I’m not sure whether it’s going to now be given to us”.

Chrysanthou said the footage was offered to Seven in February “in an attempt to settle the matter before trial, and they have not shown any interest in the footage”.

“We would prefer to see what their evidence is, at this point,” Chrysanthou said. She added that Greiss’ legal team would comply with any order to produce the material.

Justice Anna Katzmann said that “I don’t see why you should be holding it back” and ordered that the footage be handed over to Seven.

If the case is not settled in the coming months, it will proceed to a five-day trial in March next year. Greiss is seeking damages, including aggravated damages, and an order that the publications be removed from online.