CASES of the coronavirus have soared by 40 per cent in just one week, new app data has revealed.

Experts have warned that a rise in cases could be the start of a third wave as the R rate currently sits at 1.1. 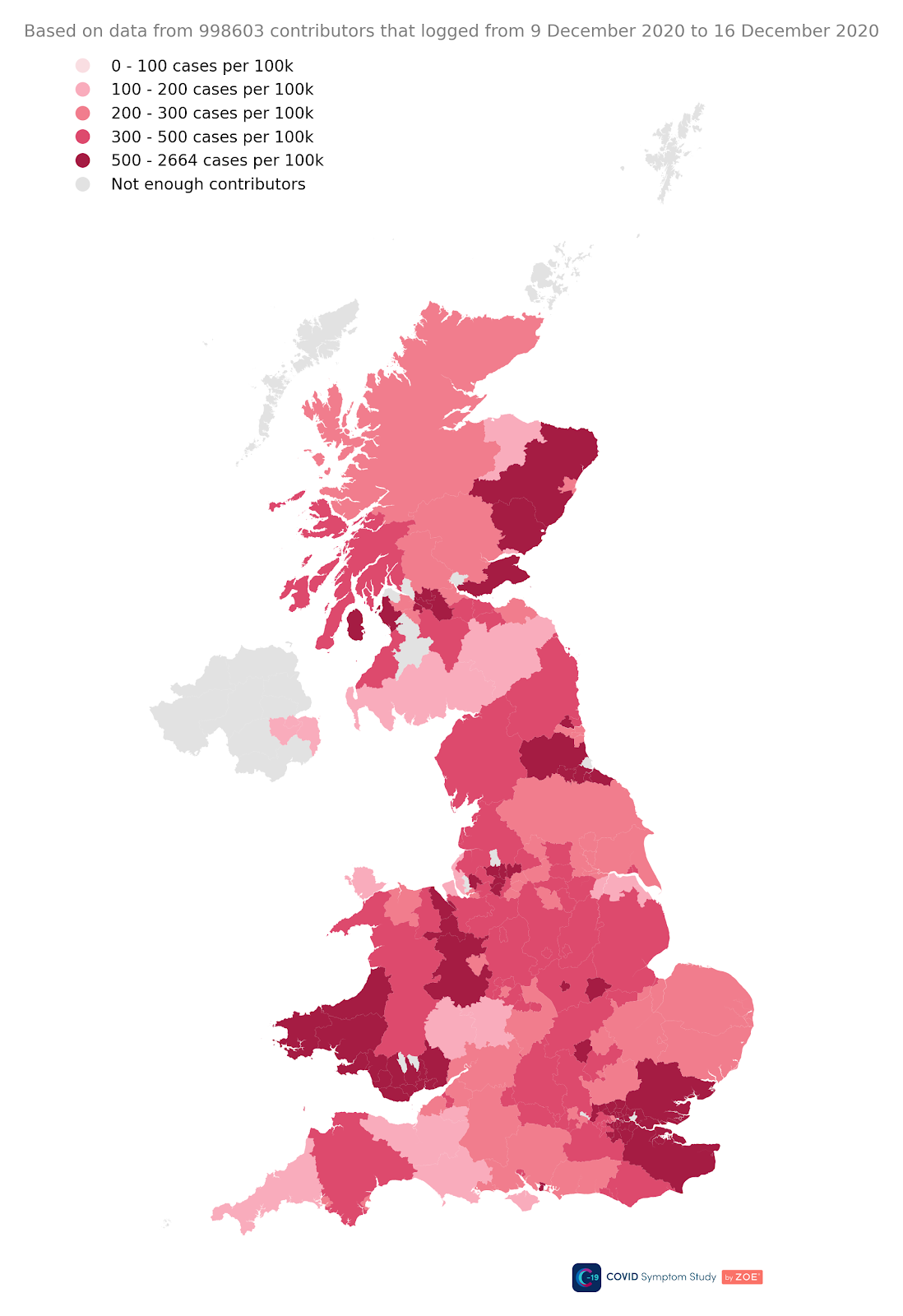 Data from the ZOE Symptom Tracker app states that there are currently 26,897 daily new symptomatic cases of Covid-19 in the UK on average over the two weeks up to 13 December.

The experts states that Wales now has more cases than at the peak of its second wave and before the nation introduced a firebreaker lockdown.

The R rate estimate provided by the King's College London led team is different from Sage estimates which are released every Friday.

The last government update stated that the UK had an R rate of0.9 to 1.

The experts said that the data paints a "bleak picture for the UK" in the run up to Christmas.

The data comes as millions of Brits prepare for Christmas. Many will be bubbling with other households in order to celebrate the festive season.

Cases in places such as London as also climbing which 10 per cent of tests in the capital coming back as positive.

The city was pushed into Tier 3 earlier this week ahead of the fortnightly review after a surge in cases. 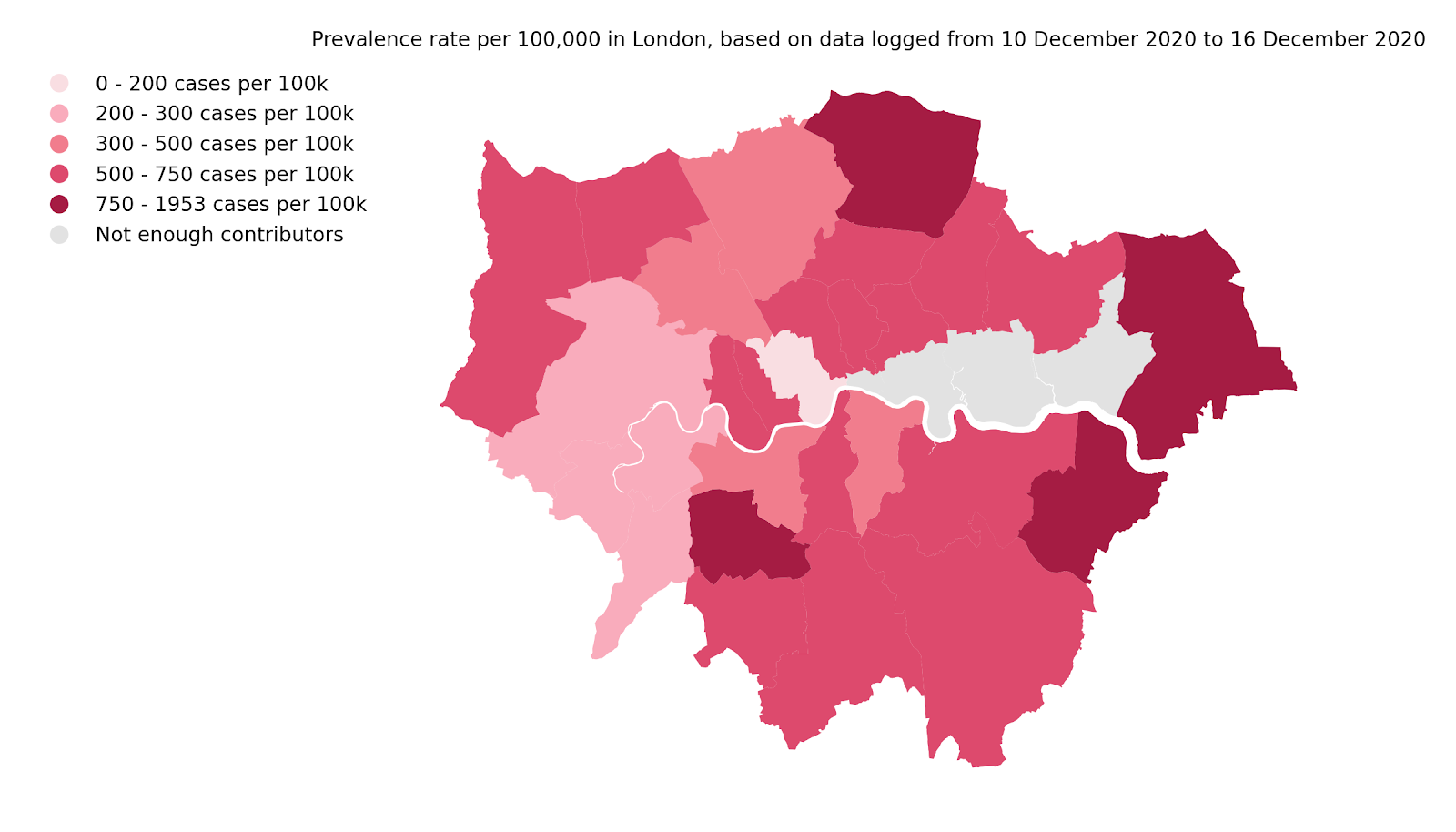 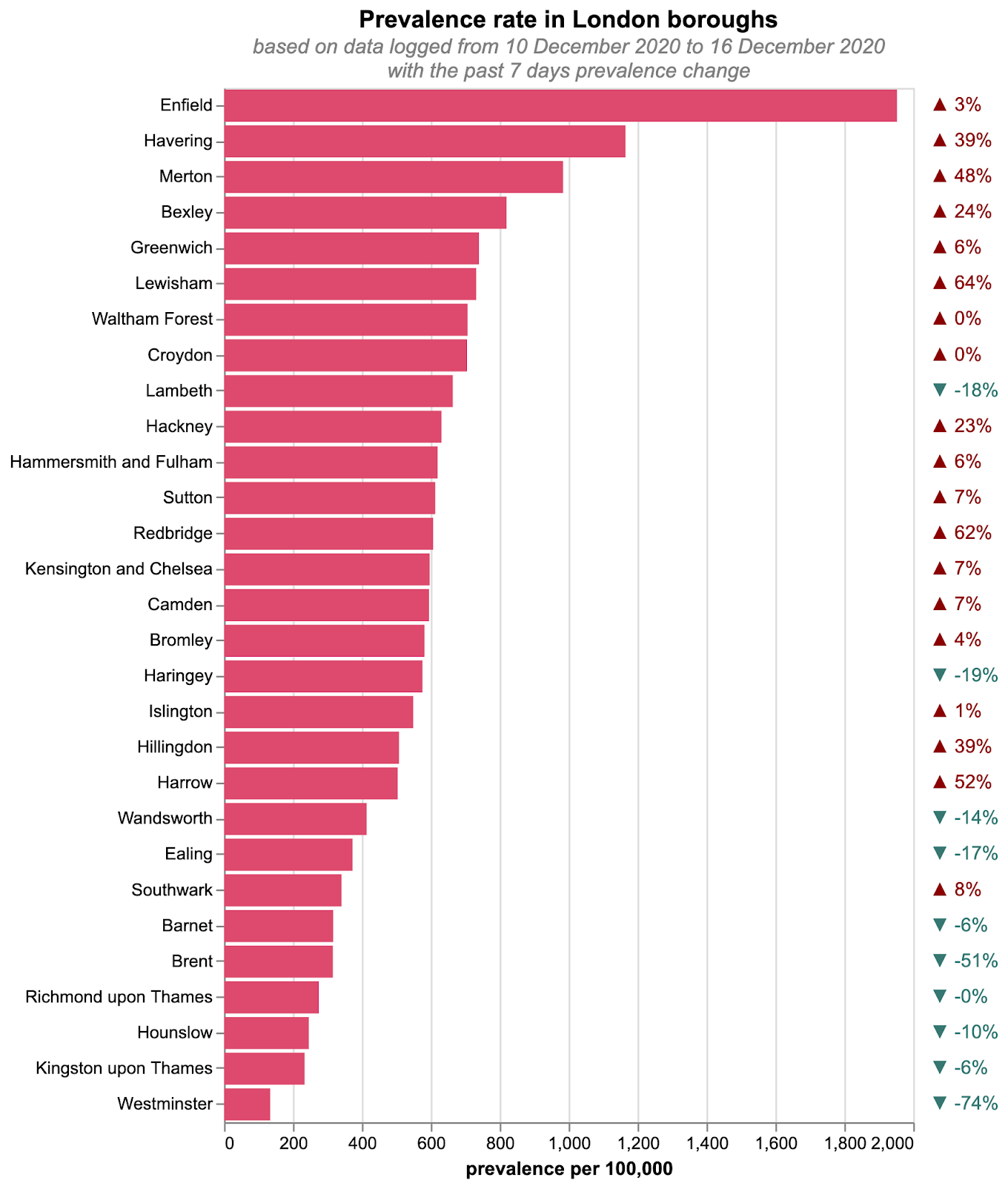 In most other regions across the UK cases are rising apart from in the North East and Yorkshire where daily cases continue to fall.

Professor Tim Spector who heads up the study warned that people needed to be aware of the risks this Christmas.

“With just a week until Christmas Day it’s a bleak picture across the UK, particularly for Wales and London.

"Our data shows that cases and hospitalisations are rising again, which worryingly could mean the start of a third wave earlier than we expected.

"Sadly, Christmas 2020 won’t be normal. People should stay in small groups, avoid travelling to and from higher risk areas and socialise outdoors."

He added that people also need to be aware of early symptoms including headache and fatigue.

Prof Spector added: "There are no exceptions, everyone needs to take care, but we are urging people to consider postponing Christmas socialising until Easter.”

Just yesterday Prof Spector teamed up with celebrities to urge Brits to check their symptoms ahead of spending time with their families this Christmas.

Screen stars such as Dame Judi Dench, Emma Thompson and Robert Lindsay have united to spread festive cheer in the form of a handy how to video on how to check for signs of the coronavirus.

The key symptoms of the coronavirus are a loss of taste and smell, a high temperature and a new persistent cough.

Data from the ZOE Symptom Tracker App, which is led by Prof Spectorstates that around 60 per cent of people who contract the virus experience anosmia – a loss of taste and smell.

This, the researchers states, means that by Christmas, around one in 39 people in Wales will be infections and one in 86 in London.

This compares to a national average of around one in 70.

Prof Spector said that the figures were the "very much reasonable best case scenario".

Data from the ZOE app also shows the worst performing areas in Tier 2.

Northamptonshire, Cumbria, Shropshire and Telford & Wrekin, Liverpool City Region and Somerset and Bath and North East Somerset had the worst case rates in Tier 2 in the week up to December 18.

The data also showed that East and West Sussex, and Brighton and Hove had been one of the best performing areas in Tier 3.

Data from the app is based on newly symptomatic users of the app who have had positive swab tests.

Matching pair of rare Chinese vases sell for £324,000 after sitting on couple's mantelpiece for decades

British PM May battles to save Brexit deal and her job