Hospitalisations of patients with COVID-19 in NSW increased again with 302 cases recorded, up from 284 a day earlier. However, patients requiring intensive care remained stable at 40.

The latest NSW Health figures shows the number of new COVID-19 cases across NSW increased to 3763, following 3057 cases on Tuesday. 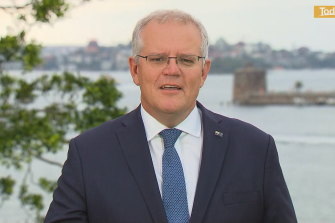 Testing numbers remain high as asymptomatic interstate travellers are forced to get swabbed, with another 151,443 people taking a PCR test in the 24 hours to 8pm on Tuesday.

Mr Morrison said decisions about booster timeframes are not for politicians to make, and downplayed reports about a Doherty Institute model predicting up to 200,000 cases a day by February.

"We saw similar numbers [modelled] at the start of the COVID pandemic which were never realised," he told Sunrise.

"The modelling that has been reported is a very unlikely, extreme-case scenario that assumes that nobody does anything – nobody gets boosters, there are no changes that take place, no one exercises commonsense."

Chief Medical Officer Paul Kelly described reporting about the modelling as "selective" and "highly misleading". He said the five underlying assumptions were:

"None of these five assumptions represent the likely state of events, let alone all of them together, therefore presenting that scenario as the likely scenario that will occur is highly misleading," Professor Kelly said.

"Importantly, after almost four weeks of Omicron in Australia there are currently no confirmed Omicron cases in ICU and no deaths confirmed to date."

Mr Morrison said ICU rates are the most important thing and "case numbers are no longer the issue" as COVID becomes endemic like other illnesses.

"We are watching those rates in hospitals. At the moment, they are performing very well. Victoria has had over 1000 cases a day for some time now and their hospital system is standing up very well. The same is true here in NSW," he said.

Mr Morrison said one topic for discussion on Wednesday would be testing, given Queensland, South Australia, Tasmania and the Northern Territory require travellers to get a test within 72 hours before arrival.

This is straining lab capacity, with so many asymptomatic people queuing up for pragmatic rather than health reasons.

"We have got to get some commonality between the states and territories about how they are requiring these PCR tests, in particular," the Prime Minister said.

"The states are going to have to talk to each other about that because decisions are being made in one state, they are impacting on the testing resources in other states."

While You Were Sleeping: 5 stories you might have missed, Sept 25