Home » World News » CRAIG BROWN: Spaghetti for me please… and make it snippy!

CRAIG BROWN: Spaghetti for me please… and make it snippy!

Years ago, I used to go to a nice hippy barber in Long Melford, Suffolk.

On one of my visits, I was wearing a second-hand coat, with a tattered lining that was spilling out through the bottom of the sleeves.

At the end of the haircut, I had just put my coat back on, when the barber said: ‘Shall I tidy that up for you?’ And, with that, he took out his scissors and gave my cuffs a good trim.

I was reminded of this happy episode while watching a video on Mail Online. It featured a chubby American man, a less crotchety version of Thomas Markle, who has come up with a novel way of eating spaghetti.

In his right hand, he holds a fork, using it to gather up the long strands of spaghetti. So far, so good. But in his left hand, he clutches a pair of scissors, with which he cuts the strands down to a more manageable size.

The system seems to work well, and the man looks relaxed and perfectly cheerful. Furthermore, his jersey is spotless. He is clearly doing something right, and, in a kinder world, would be congratulated for passing on his handy tip.

But human beings have long been resistant to change, even if it is for the better. Many of the online comments below this merry little video are as angry as can be.

‘For the love of God man, do you have no shame?’ asks one. ‘Breaking up, cutting up, chopping up long pasta is sacrilege to Italians. It is a crime worthy of capital punishment.’

Another writes: ‘What in God’s name is going on here???? That is so wrong, he should never be allowed to eat spaghetti again.’

One or two are frankly abusive, insulting the gentleman’s looks, manners and character. ‘The odds of that guy being an axe murderer must be near 100 per cent,’ suggests one disgruntled browser. 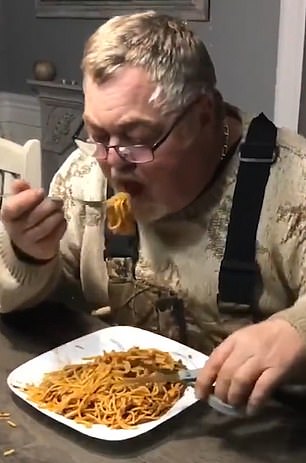 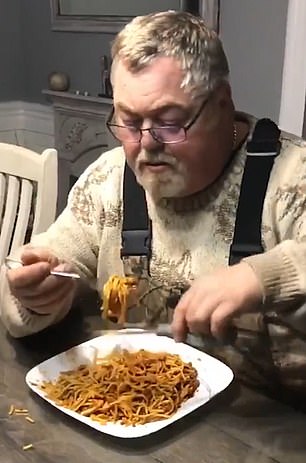 The man’s system seems to work well, and he looks relaxed and perfectly cheerful. Furthermore, his jersey is spotless. He is clearly doing something right, and, in a kinder world, would be congratulated for passing on his handy tip, writes Craig Brown

Hardly anyone seems prepared to acknowledge that though the scissors method may be unorthodox, it represents a perfect solution to a problem that has long plagued mankind.

The conventional method for dealing with a plate of spaghetti is to a) pick up a few strands with a fork, b) twirl them round on a spoon, and c) pop the neat little bundle straight into the mouth. But anyone who has ever wrestled with a plateful of spaghetti knows that things are never that simple.

For a start, it is impossible to pick up just a few strands. Like a mad conga line, the strands all cling to one another and refuse to let go.

Though you may have aimed to pick up two or three strands, before you know it two dozen or more have stubbornly draped themselves around your fork, and have no intention of leaving.

So you twirl and you twirl, but, far from getting neater, the bundle on your fork grows bigger and bigger. Within seconds, it has ballooned into a heap roughly the size of a cricket ball.

And the trouble has only just begun. Spaghetti invariably comes drenched in a sauce specially selected for its propensity to splatter. So as you twirl your fork, and the bundle increases, the brown (bolognese) or red (marinara) sauce shoots out in all directions, turning the shirt of even the most fastidious diner into an exciting new work by Jackson Pollock.

Half the spaghetti may arrive safely in your mouth; the other half remains firmly, or not-so-firmly, on the outside, slopping around, drenching your chin with sauce.

This is why spaghetti is never served at state dinners, even in Italy: within seconds, a white-tie dinner for 400 grandees can turn into a scene from Kill Bill or The Godfather Part II, with every bigwig present spattered top-to-toe in vivid red sauce.

Many people continue to believe that the Italians have developed a knack for tackling spaghetti, but this is not so. Eating out in Italy, I have noticed that the plumpest veterans are no better at twiddling spaghetti than anybody else: their technique is simply to wrap themselves in large napkins before embarking on their meal.

At last, the anonymous man on Mail Online has shown humanity the way ahead. With a pair of scissors, our spaghetti-eating future is assured.

But will we know what to do with all the time we had previously allotted to gathering up spaghetti?

As someone once said: ‘No man is lonely eating spaghetti; it requires so much attention.’

Mum's appeal to find Oxford University student, 19, missing for a week after telling her he's 'struggling to cope'

This vagrant is why homeless-outreach workers are fleeing Penn Station