It’s just not cricket! Tournament is meant to inspire children to get fit… but players are pictured wearing kits sporting JUNK FOOD logos

It’s the cricket tournament designed to get children excited about the sport.

But ‘The Hundred’ was caught up in controversy yesterday due to its eight teams’ sponsors – which range from salty crisps to sugary popcorn.

Male and female squads from cities across England and Wales will battle it out in the five-week 100-ball competition next summer, which will be shown on Sky Sports and the BBC. 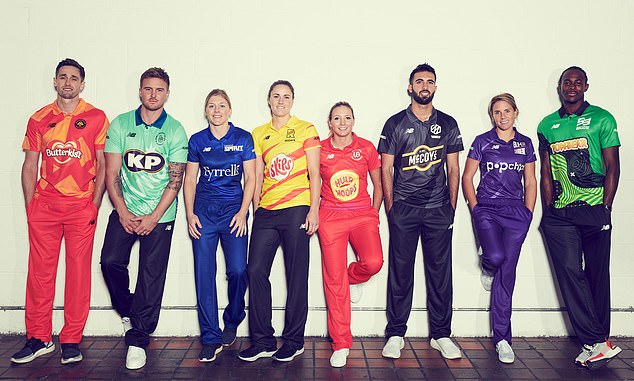 The England and Wales Cricket Board previewed the teams’ kits yesterday, all of which carry brands from KP Snacks, ahead of ‘The Hundred’ tournament next summer

The England and Wales Cricket Board previewed the teams’ kits yesterday, all of which carry brands from KP Snacks.

Shirts for Birmingham Phoenix players have a logo for Butterkist popcorn – which contains more than half an 11-year-old child’s recommended daily allowance of sugar in one 30g serving.

Caroline Cerny of campaign group the Obesity Health Alliance said the sponsorship would fuel the ‘tide of junk food advertising’ aimed at children.

‘These types of partnerships create a really unhelpful association between healthy sports and unhealthy foods,’ she said.

Rob Calder, commercial boss of The Hundred, said the contest ‘will offer world-class cricket for every family and KP Snacks share that vision’.

Kevin McNair of KP Snacks said it was encouraging families to be more active.