As Egyptian President Abdel-Fattah El-Sisi prepares to meet with President Donald Trump in Washington, critics are using his visit to protest what they see as human rights violations and steps to further codify his authoritarian rule in Egypt.

While Trump is expected to embrace the Egyptian leader, members of Congress in particular are increasingly vocal in their opposition to Sisi’s seizure of power and crackdown on political opposition, including the detention of more than a dozen U.S. citizens.

The White House said Monday the two leaders will have a “very frank and open” conversation about human rights and civil society, but officials emphasized their “warm and personal” relationship, adding that expanding on that is among the visit’s goals.

But Sisi’s trip comes a week before the Egyptian parliament votes on constitutional amendments that would ensure the general-turned-president remains in power until 2034. The amendments proposed by the pro-Sisi parliament majority, Support Egypt Coalition, would allow the president to run for two six-year terms compared with four-year terms. In addition, it adds a clause that allows the changes to apply to Sisi, whose last term should end in 2022. The changes would also grant him executive authority over the judiciary and further expand the role of the military in political life.

“It seems by coming to Washington at this key moment, Sisi is looking for support for these amendments — either explicit or implicit. If Trump once again says he’s ‘doing a great job’ that will send a message about these amendments — and it will not be one of concern,” Sarah Margon, the Washington director at Human Rights Watch, told ABC News via email. 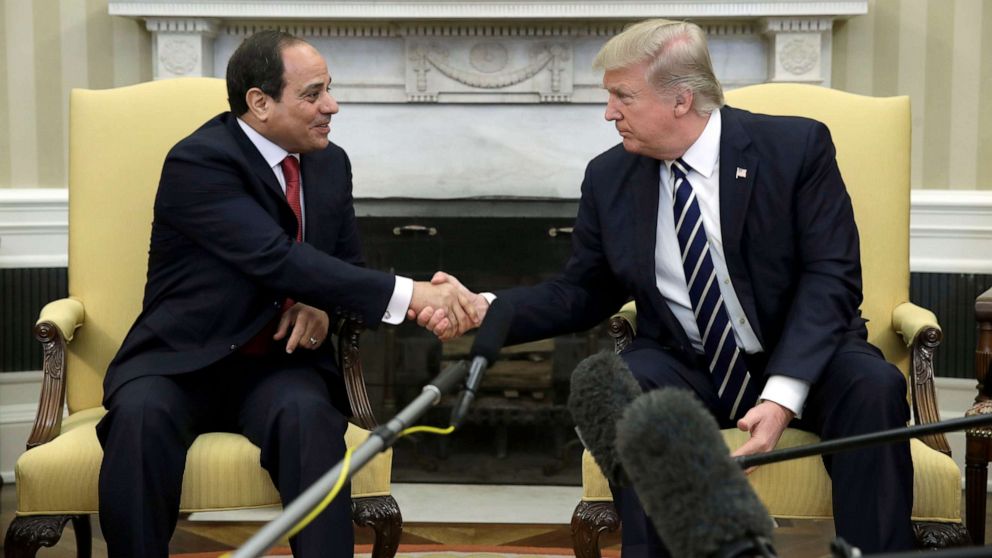 Tuesday’s meeting will be the sixth between both presidents and Sisi’s second visit to the White House. During his last visit, the Egyptian president was praised by Trump for “a fantastic job” and promised him an ally and a friend in the U.S.

Last April, Trump also tweeted his congratulations to Sisi for winning reelection in a process heavily criticized for a crackdown on opposing candidates and for allegations of intimidation and abuse. Sisi won 97% of the vote.

While the White House said human rights will be addressed, officials said their meeting will focus on counterterrorism, economic issues and the Israeli-Palestinian conflict. Egypt, which marks the 40th anniversary of its historic peace treaty with Israel, has been increasingly cooperating with the U.S. ally on counterterrorism and playing the role of mediator between Israeli and Palestinian leadership in Gaza amid recent tensions.

Because of the importance of these security relationships, the Trump administration has been quieter on Egypt’s human rights record, critics have said. But they warn that the consolidation of power presents a greater long-term risk for chaos.

“By closing off all peaceful means for the public to change the Egyptian government or to express its grievances, these amendments will create a veritable pressure cooker in which any and all dissent could result in turmoil and unrest,” according to the Project on Middle East Democracy, a nonpartisan group that advocates for democracy in the region.

Senator Patrick Leahy, D-Vt., a vocal Sisi critic who’s lobbied against the provision of military aid to Egypt since Sisi came to power through a popularly backed coup that ousted Islamist President Mohamed Morsi in 2013, urged Trump to be tougher on the former general.

“Instead of welcoming him with words of praise, President Trump should stand up for American values and our true national security interests,” Leahy said in a statement to ABC News.

Leahy, along with other key Democratic lawmakers, also is supporting a campaign by April Corley, an American woman severely injured in Egypt in a 2015 military attack, to halt a $1 billion sale of Apache helicopters to Egypt, the second-largest recipient of U.S. foreign aid after Israel.

In 2015, the Egyptian military killed 12 people using U.S.-made helicopters, including Corley’s boyfriend, in the western desert. They later said they had mistaken their tour bus for Islamic militants. Egypt has offered Corley $140,000 in damages, which is less than the cost of her medical evacuation from the country, let alone the 10 surgeries she’s since required. 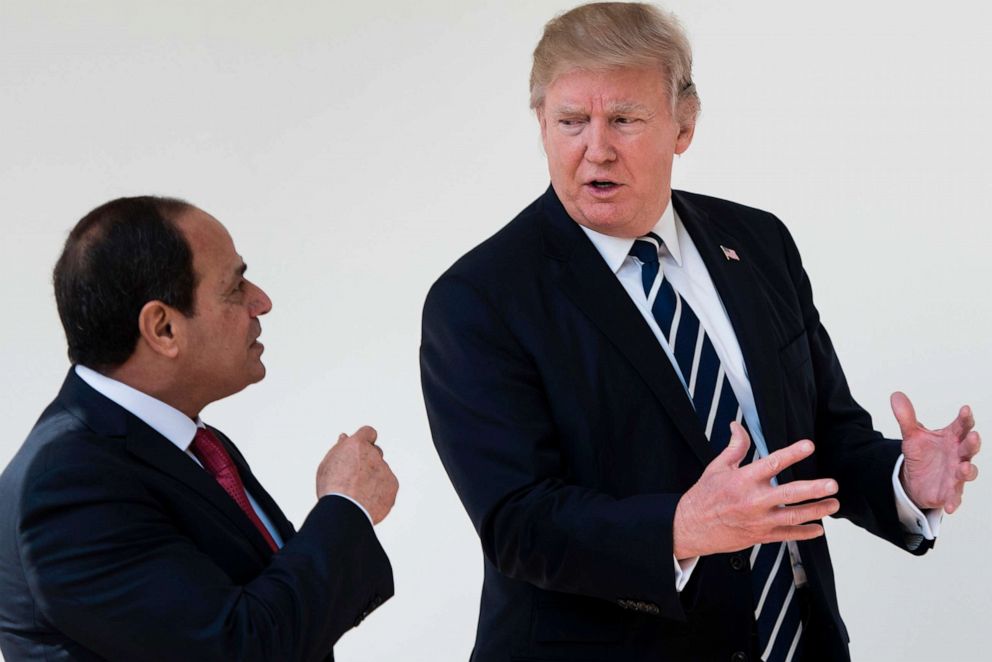 “It is long past time for the United States to use our influence with Egypt, including tying our military aid to reforms that protect the fundamental rights of the Egyptian people. The alternative is to continue to be complicit with a military dictatorship that contradicts the most basic ideals and principles our country stands for,” Leahy added.

Sisi’s government is also accused of launching the most aggressive crackdown down on political opponents from across the political spectrum in the country’s modern history, according to Amnesty International. While Sisi has repeatedly insisted that there are no political prisoners in Egypt, Human Rights Watch said an estimated 60,000 behind bars in Egypt have been detained political grounds.

On Monday, a bipartisan group of 17 U.S. lawmakers signed a letter to Secretary of State Mike Pompeo, urging him to raise key concerns about Egypt during the meeting between Sisi and Trump, including the “unjust detention” of U.S. citizens.

More than a dozen U.S. citizens are detained in Egypt, according to the letter, which was signed by the top Republican and Democrat on the Senate Foreign Relations Committee.

Praveen Madhiraju, a lawyer from Pretrial Rights International, is hoping the visit would secure the release of Mustafa Kassem, a U.S.-Egyptian national detained in Egypt for almost six years. According to Kassem’s attorneys and family, he was unlawfully arrested following a time of turbulence after the 2013 ouster of the Islamist president.

Kassem started a hunger strike in September 2018 after he was sentenced to 15 years in a mass trial with more than 700 defendants. His family said he’s slowly dying.

“President Trump is Mustafa’s best hope. Mustafa has withdrawn all of his appeals and done everything he needs to do for President Sisi to free him,” Madhiraju told ABC News. “But that won’t happen without President Trump making a simple but life-saving request. As Mustafa wrote President Trump in September, ‘I am putting my life in your hands.'”

Pompeo: Saudis assured me of accountability for Khashoggi murder