Of the three massive challenges facing Rishi Sunak this week, the Mail was much heartened yesterday to see him meet the first one head on.

His decision to block the SNP’s dangerously ill-judged Gender Recognition Bill was an act of political courage which will be applauded on both sides of the border.

The legislation would have given anyone in Scotland over 16 the ability to change gender without a medical diagnosis, allowing biological males access to female-only spaces. Even former Liberty boss Baroness Chakrabarti fears the impact it would have on UK-wide equality laws.

Naturally, the SNP is incensed. With risible hypocrisy, Nicola Sturgeon accuses Mr Sunak of using trans people as ‘a political weapon’. But this was unquestionably the right decision. 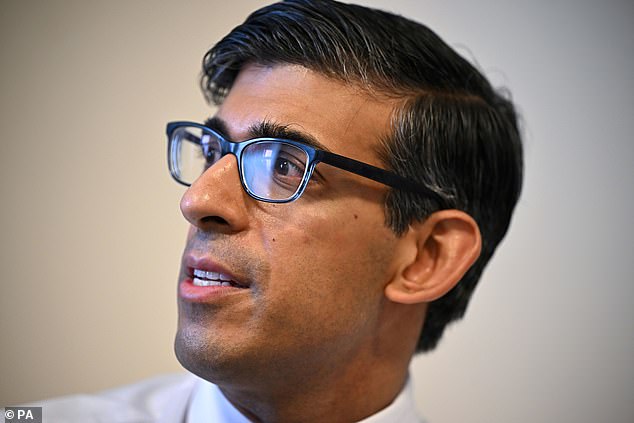 (Incidentally, the appalling crimes against the apostrophe in Miss Sturgeon’s tweet on the subject were a poor advertisement for the Scottish education system.)

Since becoming Prime Minister, Mr Sunak has quietly steadied the storm-tossed Tory ship. This was a chance to show he has passion as well as managerial competence.

He must now keep up the momentum by pushing through two other new laws – both bitterly opposed by Labour.

One would compel unions in key public services to provide a minimum level of cover during strikes. The other gives police greater powers to curb disruptive Just Stop Oil protests.

These popular measures would give the PM a chance to put clear blue water between himself and Sir Keir Starmer – and demonstrate he has both the Conservative credentials and the fighting spirit needed to win the next election.

Met police in the dock

Depraved, controlling and violent, David Carrick preyed on more than a dozen women over two decades. In court yesterday, he admitted to a staggering 49 charges, including 24 rapes.

Yet this was not some loner who dwelt in the shadows of life. He was a serving officer in the Metropolitan Police.

Already reeling from a litany of other horrendous scandals, Scotland Yard is once again in the dock. Its failings in this case are profoundly disturbing.

How was such a twisted creature ever allowed into the force in the first place? And once in, why was he not weeded out sooner? Where was the vetting?

On nine occasions between 2000 and 2021 Carrick was the subject of complaints of violence, harassment, and sexual assault, including rape. Yet he was allowed to remain in the police and continue his reign of terror. It beggars belief.

And he is far from a single rotten apple. The Met admitted yesterday that 1,000 officers and staff are being investigated over alleged domestic abuse or sexual offences.

Following the appalling sexism and bigotry uncovered at Charing Cross police station and the obscene sharing of pictures between officers of the bodies of two women murdered in a north London park, Scotland Yard’s reputation has hit rock bottom.

New Commissioner Sir Mark Rowley has pledged to clean up the force. This hideous case and its ramifications underline the immense scale of the task.