Growing popularity of kombucha fizzy drinks has lead a Melbourne label to build a huge new fermentary in Dandenong, making it the world’s third-largest producer of the thirst-quenchers.

The $25 million Remedy Drinks facility is 18,268 square metres – a similar size to a football field. 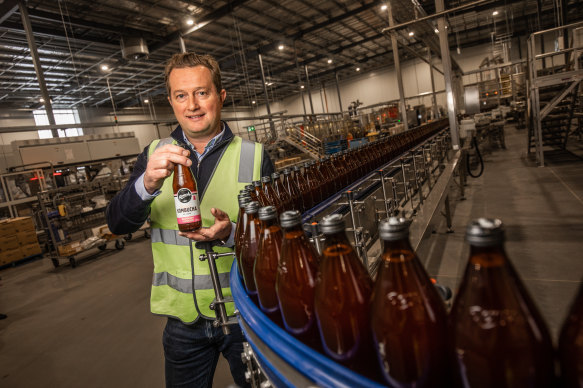 Chris Gillard is the manager of Remedy Drinks which has just opened a new fermentary in Dandenong South. Credit:Scott McNaughton

It’s a far cry from the kitchen bench where founders Sarah and Emmet Condon started the business 10 years ago, but the kombucha is still made in much the same way.

In one room warmed to 30 degrees, hundreds of vats of kombucha are brewed, all using Remedy’s original “mother” scoby – a live culture of yeasts and bacteria, which is over 50 years old.

The drink is made from slightly sweetened tea which feeds the scoby creating a cocktail of living organisms that is carbonated like beer.

After brewing for 30 days, the sugar is removed from the fermented product and kombucha is tapped into the filling lines, which at top-speed can fill 20,000 of Remedy’s brown glass bottles in an hour.

Managing director Chris Gillard said IRI data suggests the market for kombucha in Australia is worth $300 million and will continue to grow driven by the trend towards healthy drinks.

“Young people are drinking less and the older generation are turning up to a barbeque with beers and a ‘booch’, but we think the biggest trend is away from artificially sweetened drinks, which is half the market,” he said.

To tap into this demand, Remedy has expanded its range, and now sells shots and a soda-based drink called Sodaly. 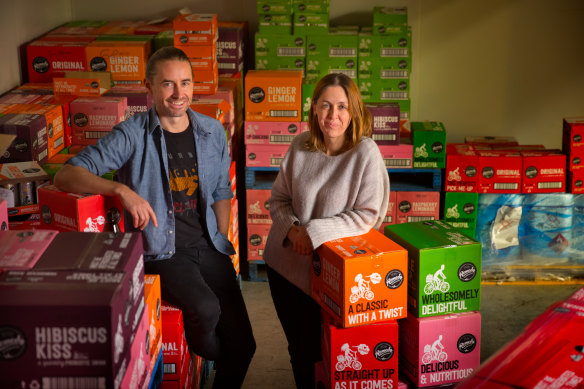 Dr Evangeline Mantzioris from the University of South Australia said consumers were moving away from drinking soft drinks towards drinks like kombucha because of the bad health implications of soft drinks.

“There is a realisation that soft drinks whether with sugar or artificially sweetened are not good for our health and kombucha does really offer an alternative,” she said.

“Most importantly you need to consume things that you enjoy”, she said.

Kombucha has become a lucrative business. Remedy’s most recent accounts filed with the corporate regulator for 2021 reported revenue of $88 million and profit of $2.6 million.

Drinks giant Lion Nathan bought a stake in the business in 2018 and now owns 49 per cent of Remedy.

Gillard said the new fermentary would produce kombucha for Remedy’s push into the USA, UK, Canada and Asia.

International sales already make up 30 per cent of business and the company says those markets are growing “very quickly”.

“Without this fermentary our international expansion plan couldn’t happen, by Christmas we would have run out of capacity,” Gillard said.

Make the most of your health, relationships, fitness and nutrition with our Live Well newsletter. Get it in your inbox every Monday.

Gas prices: 'We could see $5 a gallon' as Russia-Ukraine war drags on, strategist says