Face the truth: The courtroom battle between a husband and wife to decide who REALLY created the saucer-eyed children ‘Keane’s Kids’ that snobby art critics loathed

As Margaret Keane took her place at the easel, silence fell over the crowded courtroom. Sitting with her back to the jury so that they could witness every brushstroke, she was embarking on what would be the most important work of her life.

Beginning with two huge dark pools for eyes and framing the pixie-like face with wispy brown hair, she set about painting an imaginary little boy. She hoped it would prove that she, and she alone, was responsible for the numerous portraits of similarly saucer-eyed children that had become a kitsch craze worldwide in the 1960s.

Signed simply ‘Keane’ and reproduced on everything from prints and postcards to plates and mugs, they sold by the millions in Woolworths and other cheap and cheerful ‘dime stores’ and made a fortune for Margaret and her ex-husband Walter.

But which of them was really ‘Keane?’ 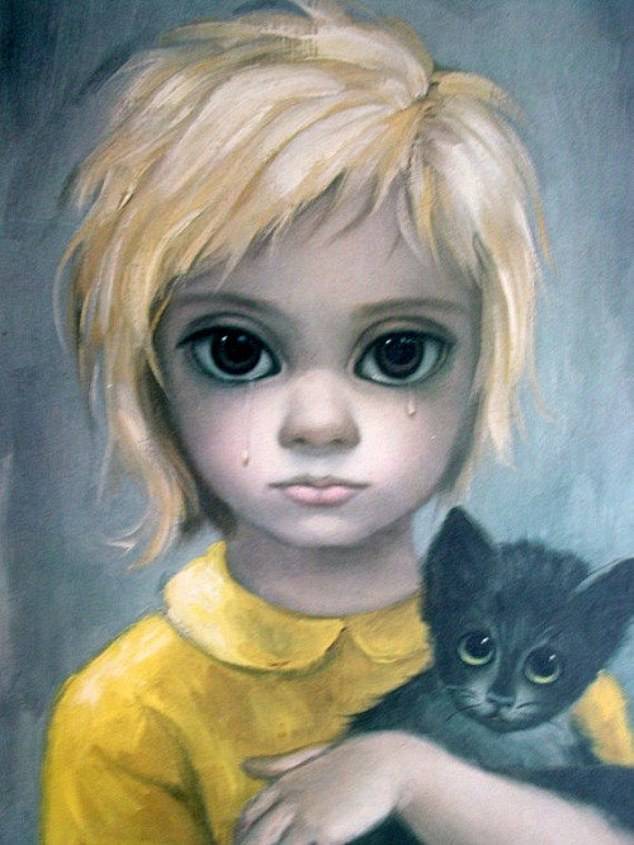 The look: Margaret Keane artwork The Stray. Margaret Keane also claimed to have painted portraits commissioned by some of Hollywood’s biggest stars. No one knew who Keane was, and there was a trial to discover if it was Margaret or Walter 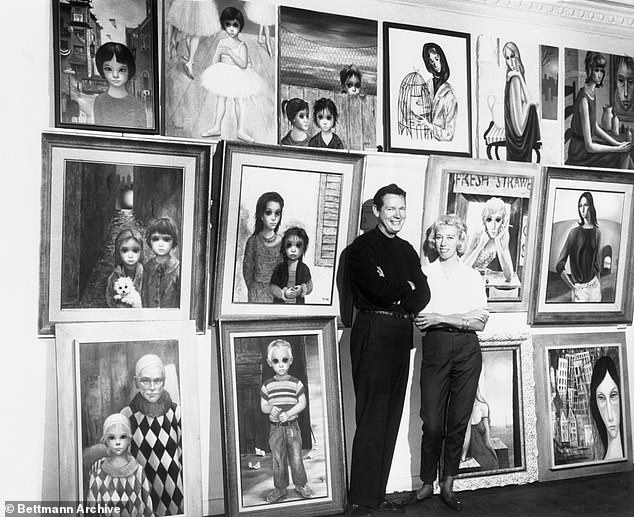 Margaret and her ex-husband Walter, pictured, competed in a ‘paint-off’ which a judge demanded to uncover who Keane was

Yet Margaret, who has died in California at the age of 94, was adamant that she was the artist responsible, not just for ‘Keane’s Kids’ as these works became known (such as The Stray), but for portraits commissioned by some of Hollywood’s biggest stars.

There was even a Keane portrait of President John F. Kennedy’s children, John and Caroline, on show in the White House.

Keane’s work could also be seen in the headquarters of the United Nations building in New York, in Moscow’s Bolshoi Theatre, and in many private collections, including that of actress Joan Crawford. It was imperative to determine who was responsible for the vastly profitable oeuvre.

During the trial, held in the Hawaiian capital Honolulu in the summer of 1986, the judge concluded that the only way to decide was in an extraordinary ‘paint-off’ between the warring ex-spouses. 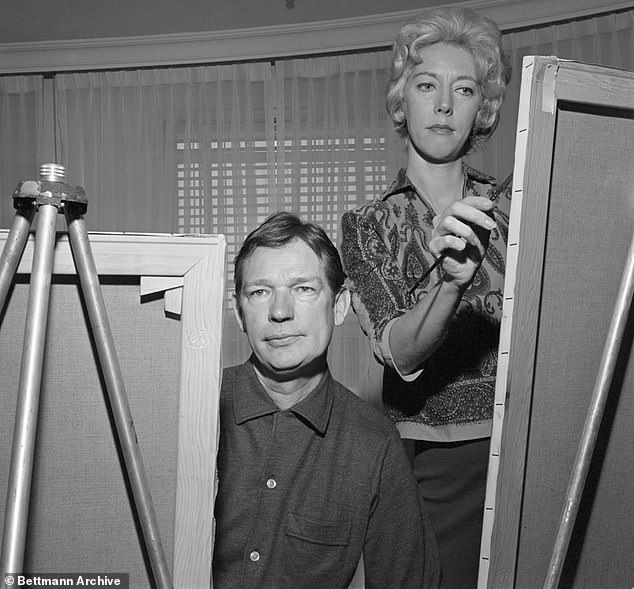 Both Margaret and Walter, pictured, had to produce an artwork in the signature style of the paintings as the court looked on

Both would have to produce a work in the signature style as the court looked on. Margaret had no qualms about the challenge. As part of her evidence, she had brought along paintings to prove that she had been drawing angels with big eyes and those haunting urchins since early childhood.

Born in Nashville, Tennessee, in 1927, the daughter of insurance agent David Hawkins and his wife Jessie, Keane said her fascination with eyes began following a failed operation on her ear when she was ten.

It left her with hearing loss that forced her to look into people’s eyes to help her understand them more clearly. The jury was shown a picture of a girl she had painted when she was 11. After her marriage to first husband Frank, her range of subjects expanded to include adults and animals but always included the spooky images of children with the eyes.

Margaret and Frank had a daughter, Jane, but they divorced, and she married Walter in 1955. A suave former estate agent, he had what she called ‘a genius for promotion’ and he began selling her paintings at a nightclub in San Francisco.

As a young mother — she had another daughter, Susie, with Walter — Margaret was, at first, happy with this arrangement.

‘It suited me fine. I was timid and shy,’ she told Life magazine. But she was shocked when she discovered that Walter was passing the paintings off as his own.

He told Margaret that buyers were willing to pay more if they thought the works were painted by a man. ‘He threatened to kill me and our two daughters if we told anyone,’ she revealed.

Soon the ‘Keane’ paintings were earning the couple a seven-figure income and, in interviews, Walter claimed he’d started painting them after visiting Berlin in 1946 and seeing starving children fighting for scraps of food.

By now, Margaret claimed, Walter was a tyrannical overseer, imprisoning her in a basement studio for 16 hours a day as she worked on up to seven paintings at a time.

He may have lacked artistic talent himself, but he knew what sold. ‘He was always pressuring me to do more: ‘Do one with a clown costume’ or ‘Do two children on a rocking horse,’ ‘ she recalled. 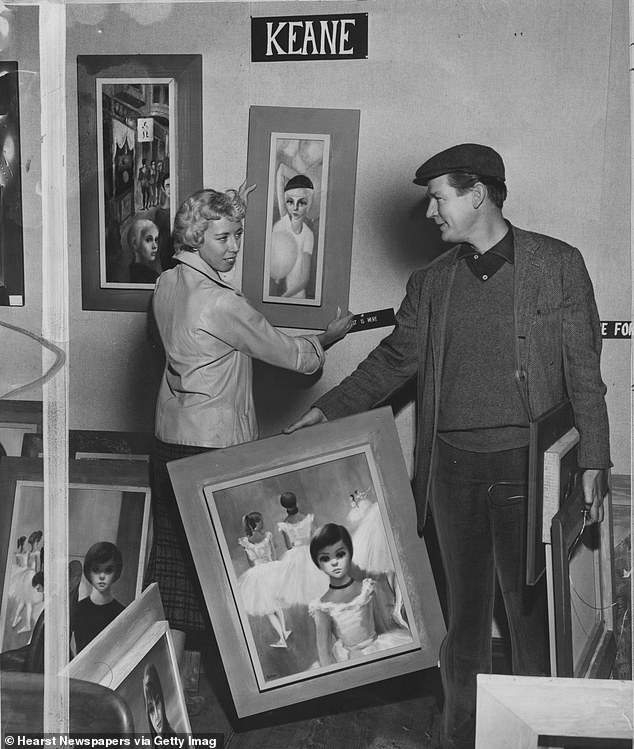 The Keane prints had grossed the equivalent of $20 million today ($16 million) in 1964. Margaret divorced her husband but remained complicit in the fraud as she said it was too late to say it was not Walter

The paintings became a fixture in thousands of American suburban homes. One newspaper sneered that they had become all ‘the middlebrow rage’. They sold via mail order throughout Europe, Japan and Australia, too.

This led to the organisers withdrawing it on the grounds of ‘bad taste and low standards’, but it had its defenders, including pop art guru Andy Warhol who described it as ‘just terrific’.

In 1964, the Keane prints grossed the equivalent of $20 million today (£16 million). As the staring eyes she was painting grew ever bigger, the Keanes’ marriage was growing unhappier.

‘Those sad children were really my own deep feelings that I couldn’t express in any other way,’ Margaret said.

They divorced but she remained complicit in the fraud ‘because it was just too late to say it wasn’t him’.

Margaret moved to Hawaii where she married sports journalist Dan McGuire in 1970. Their relationship helped rebuild her confidence and that year, on a trip back to San Francisco, she told a newspaper reporter that it was she who had painted every single one of Keane’s Kids.

She offered to prove it with a demonstration of her and Walter’s respective painting abilities in the city’s Union Square. Large crowds gathered, along with TV crews. But there was no showdown because Walter did not turn up.

In 1984, Walter went too far, suggesting to the newspaper USA Today that Margaret was continuing to claim credit for his work because she believed him to be dead and was after his legacy. She sued him for defamation, leading to the court case in Honolulu. 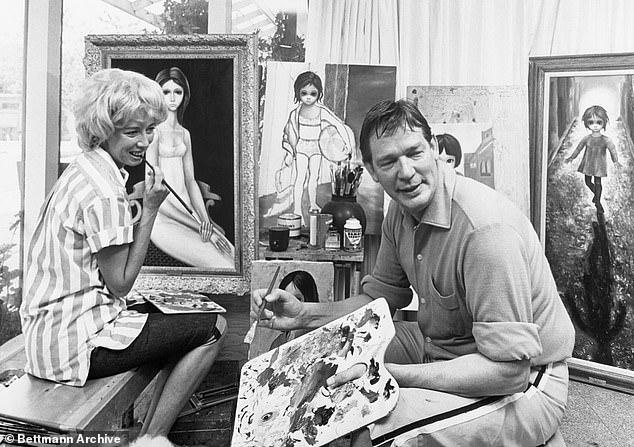 Margaret was awarded $4 million (£2.7 million) after the jury ruled that she was Keane and doing all of the paintings herself

Walter claimed to have an injured shoulder and declined to put brush to canvas. Margaret took 53 minutes to finish her painting.

In the jury’s mind there was no doubt as to who was Keane. She was awarded $4 million (£2.7 million) as compensation for the emotional distress and damaged reputation she had suffered.

Walter declared bankruptcy shortly after the verdict so no compensation was paid. He continued to insist that he had painted all of the pictures right up until his death in 2000.

‘I really feel that justice has triumphed,’ she said at the time of the court case. ‘My part in the deception had lasted for 12 years and is one I will always regret.’

She continued to paint almost until the end of her life and there’s still a market for her work today. Alongside T-shirts featuring the trademark Keane’s Kids, her website sells originals and copies of her works.

Among them is Exhibit 224, the piece she created in the Honolulu court room. A numbered print will set you back £750.

If that seems steep, bear in mind that it’s more than just a picture. Peering out at you with those large, empty eyes, it’s an unsettling testimony to the woman who was denied credit for her work for so long but who eventually found the courage to expose one of art history’s most outrageous cases of fraud — a fraud in which she was deeply embroiled.