Daniel Paproth loves his 1985 Honda City, even though others might not consider it a classic. He describes the colour as either lime green or highlighter yellow.

“It’s a beast,” he said. “An absolute weapon. I always wanted a car that suited my extra personality.” 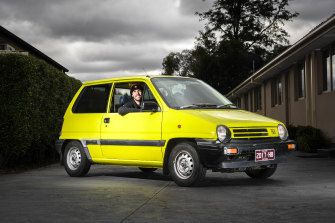 Attached to the front and rear of his compact Japanese hatchback are a set of maroon number plates, which entitle it to cheaper registration than regular cars as part of Victoria’s club permit scheme for historic vehicles.

But while Mr Paproth fills out a logbook to show he only uses his car less than once a week, there are concerns that others are rorting the system for commuting or work.

The scheme is clearly attractive to those looking for a loophole to save a buck. A 45-day permit costs just $120 each year, compared with $850 for standard vehicle registration. There is also a 90-day option costing $195.

“I love it, it’s brilliant for my purposes,” he said. “It would be a much harder decision about keeping the car if it didn’t exist. It’s not a daily driver.” 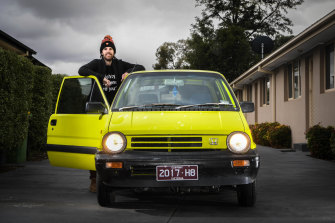 The Department of Transport is currently conducting a review of Victoria’s road rules, with access to the club permit scheme and its cheap rego set to be tightened.

Among the changes being proposed is an increase to the age for an eligible car from 25 to 30 years, while new penalties will also be considered for those who breach the rules.

Iain Ross, president of the Association of Motoring Clubs, said that a major issue with the scheme at the moment was there was no definition of what vehicles were eligible.

“It doesn’t matter once a car turns 25, it can be an old truck or a rusty Ford Laser,” he said.

“That’s meant a lot of daily drivers are slipping onto the scheme when they turn 25 years old. We need to define what constitutes a classic or historic vehicle, it’s a very difficult task.”

The matter of average motors getting around on club plates has become enough of a sore point that a Twitter page, @ShitCarsOnClubRego, was set up to document them.

As part of its review, the department highlighted problems of some people not complying with the club permit scheme’s requirements.

One issue was that some people were using cars for commercial purposes, such as driving tools to work as part of a landscaping business or hiring out vehicles for weddings. 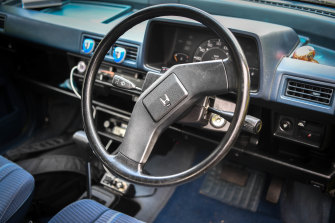 Another was that cars were being driven more than the 45 or 90 days allocated. Drivers are required to fill out their log book whenever they drive more than 100 metres.

For those who don’t follow the rules, Victoria Police can issue a $908 fine for driving an unregistered vehicle. The Department of Transport is proposing an additional $363 fine as a specific log book offence.

Mr Ross also said that genuine motoring enthusiasts had a problem with car clubs being set up purely to take advantage of the discount registration. Under the rules, an owner needs to join a club before getting a permit.

“We are concerned about the number of clubs formed only to get vehicles on to the scheme,” he said. 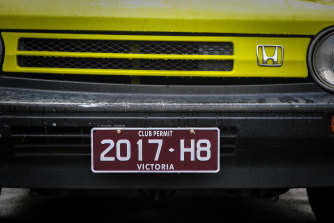 Victoria is reviewing the club permit scheme, raising the eligibility age from 25 yers to 30. Credit:Justin McManus

“There’s clubs with tiny memberships, there’s other clubs that are clearly businesses. These are not genuine clubs.”

Of the 1057 clubs currently registered as part of the scheme, the Department of Transport said 462 clubs had 10 or fewer vehicles. Seventy two were one-car clubs.

A department spokesperson said there was no intention to ban one-vehicle clubs and that the changes to the age eligibility would not be retrospective.

“We’re considering feedback on a number of proposed changes, including measures to protect the integrity of the scheme and to bring it into line with other states,” the spokesperson said.

“There are significant penalties for breaches to log book requirements and new penalties are being considered to improve compliance and remove loopholes.”

Mr Paproth said he fell in love with the Honda City after seeing some friends drive one around Australia as part of the Shitbox Rally raising money for charity.

He paid around $2600 for it and reckons it has good resale value.

“It’s a complete death trap, if I was in any minor accident. I would be in trouble because it’s so small, there’s no airbags or other safety features.

“But I’m always getting waves and honks from other drivers and I love it.”