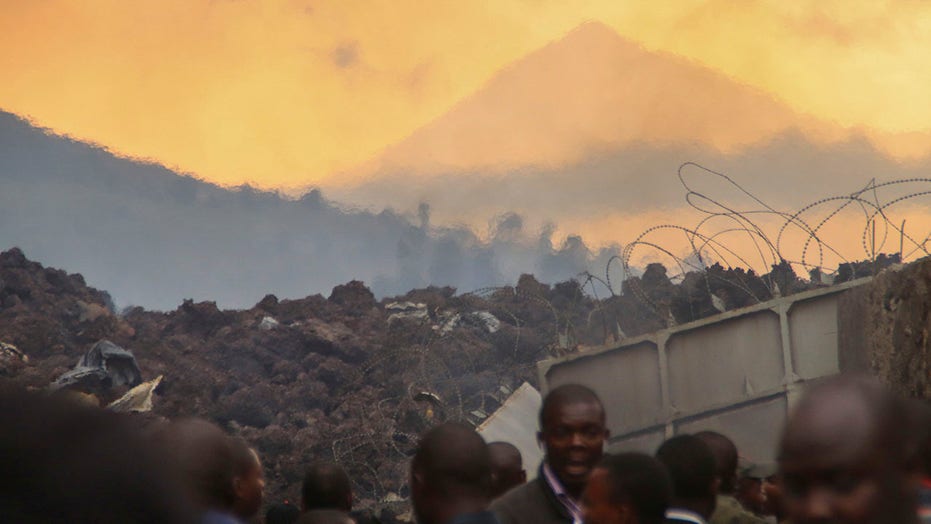 The volcanic eruption in eastern Congo two days ago has killed at least 32 people, officials said Monday as residents searched for missing loved ones amid destroyed homes on the outskirts of the eastern city of Goma where aftershocks were detected.

The toll Monday increased from 22 to 32, and was likely to continue rising, according to Joseph Makundi, head of Civil Protection for the North Kivu province. More than a dozen people died in car accidents while trying to escape, he said. Others were killed when lava hit their homes.

Some died Monday from inhaling smoke or toxic gas when they were walking across a wide expanse of the cooling lava, the scientific director of the Volcanic Observatory of Goma, Celestin Kasereka Mahinda, told The Associated Press. 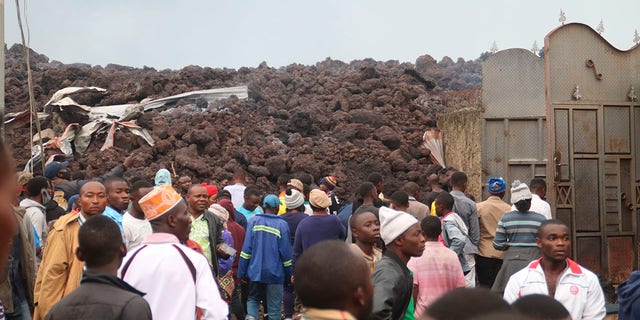 Residents check the damages caused by lava from the overnight eruption of Mount Nyiragongo in Buhene, on the outskirts of Goma, Congo in the early hours of Sunday, May 23, 2021. Congo’s Mount Nyiragongo erupted for the first time in nearly two decades Saturday, turning the night sky a fiery red and sending lava onto a major highway as panicked residents tried to flee Goma, a city of nearly 2 million. (AP Photo/Justin Kabumba)

They were traveling on the road between Kibati and Goma that was cut off by a flow of lava 1,000 meters (about a half-mile) wide, he said.

“The population of Goma must avoid unnecessary travel, but also not visit places that have been hit by lava from the volcano because these lavas are toxic and harmful,” he said.

Grief, disbelief and fear hung over the area as a delegation of government ministers, including Congo’s health minister, visited Goma after flying in from neighboring Rwanda.

Scientists at the volcano observatory weren’t able to adequately warn the public of the eruption because of a funding cut, Mahinda said.

“The observatory no longer has the support of the central government or of external donors, which explains why the volcanic eruption was such a surprise,” Mahinda told The Associated Press. A partnership between the government and the World Bank that had supported the observatory was cut in October 2020 because of the coronavirus pandemic, leaving the observatory without even internet, he said. 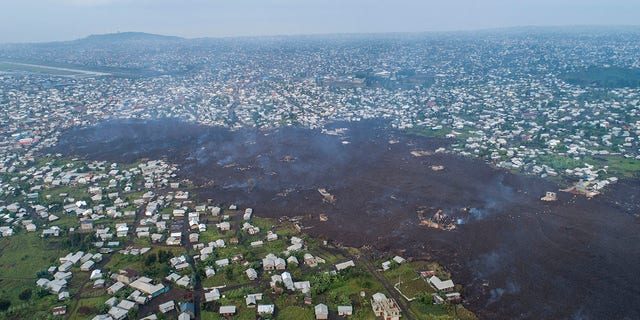 Lava from the eruption of Mount Nyiragongo cuts through Buhene north of Goma, Congo Monday, May 24, 2021. Residents returned to destroyed homes and searched for missing loved ones on the outskirts of Goma as officials called for vigilance amid small tremors after the large volcano erupted Saturday May 22, 2021 .  Mount Nyiragongo sent torrents of lava into villages after dark with little warning, leaving at least 15 people dead amid the chaos and destroying more than 500 homes. (AP Photo/Justin Kabumba)

The observatory had just started to resume operations last month thanks to new funding from the U.S. Geological Survey’s Volcano Disaster Assistance Program, which means the observatory can at least gather data after the eruption, he said.

The volcano remains active and earthquake tremors are being recorded, he said, calling on the population to remain vigilant. The government ministers visiting Goma Monday were assessing what aid is needed for those hurt by the eruption.

“The government team dispatched expressly here in Goma, following the volcanic eruption which caused a lot of damage in the city,” Minister of Public Health Jean-Jacques Mbungani said. “It is important that a strong signal from our government is given. We will have discussions with the military governor as well as with all the stakeholders so that we can identify avenues for quick solutions for the population.”

The military governor of North Kivu province, Lt. Gen. Constant Ndima called on the population of Goma not to send children to school. Goma’s international airport of Goma and the airport in Kavumu in South Kivu province were closed for security reasons, he said in a statement. 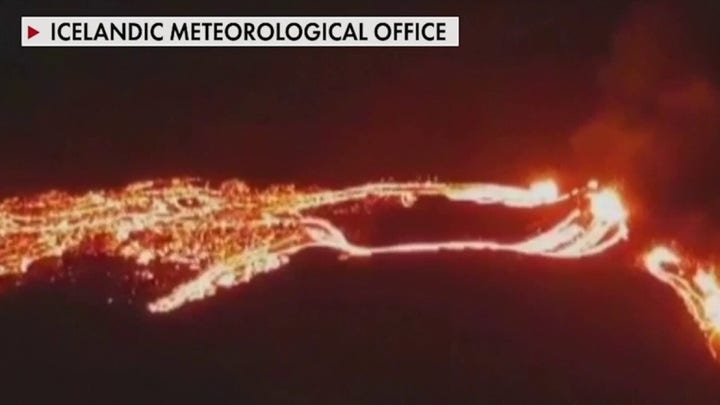 The volcano eruption caused about 5,000 people to flee from one neighborhood of Goma, a city of about 2 million people, across the nearby border into Rwanda. Another 25,000 others sought refuge to the northwest in Sake, the U.N. children’s agency said.

More than 170 children were still feared missing, and UNICEF officials said they were organizing transit centers to help unaccompanied children in the wake of the disaster as more than 150 children were reportedly separated from their families.

Goma ultimately was largely spared the mass destruction caused by Mt. Nyiragongo’s last eruption in 2002. Hundreds died then and more than 100,000 people were left homeless.

Goma is a regional hub for many humanitarian agencies as well as a U.N. peacekeeping mission. Much of surrounding eastern Congo is threatened by a multitude of armed groups vying for control of the region’s lucrative mineral resources.

Twisted dad who threw daughter, 1, off roof walks free from court with just a fine