A mathematics teacher at a public school in Perth’s south allegedly punched two year 8 boys in the face after one attempted to throw a chair at her on Tuesday.

Radio 6PR reported on its Rumour File segment on Thursday morning that the female teacher punched one of the 13-year-old students in the face before he managed to fling the chair, knocking him to the ground. 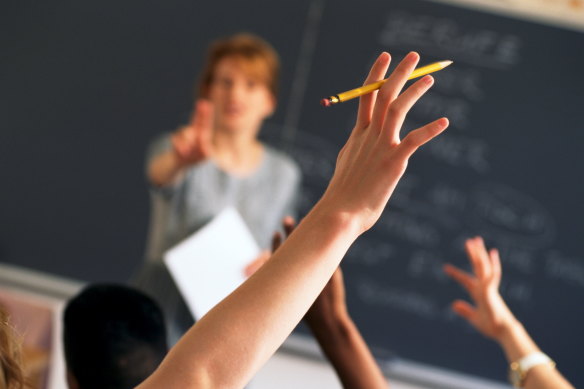 The teacher allegedly punched two year 8 students after one tried to throw a chair at her in class. Credit:File photo

She then allegedly pinned him to the ground. One of her other students tried to intervene, and he was also punched by the teacher in the process.

No charges have been pressed by either of the boys’ parents, but a school newsletter revealed there was “an incident in a class between a teacher and student and I wanted to let you know we are investigating it and have referred the matter to the Department.”

The Department of Education told WAtoday it was looking into the matter, but did not confirm any of the details alleged to have occurred.

“Parents can be assured it is being looked at thoroughly,” he said.

“As the matter is currently being assessed it would be inappropriate to comment further.”

Figures released in parliament in May showed attacks against staff at WA public schools had increased 25 per cent in the past five years, with 2577 attacks recorded in 2021.

Nearly half of those, 1066, involved a weapon, but just 249 were reported to police.

State School Teachers’ Union of WA President Pat Byrne didn’t comment on the specific incident, but said there was “no doubt that these sorts of instances are happening more frequently than they have in the past”.

“This is not a problem that is particularly confined to schools, I think you’ll find that hospital emergency wards, any people who interact with the public will report the same sort of increase,” she said.

“That said, that doesn’t make it acceptable at all. I think this is symptomatic of a much broader issue in our society.

“I absolutely don’t think that there’s enough that’s being done across the board to prevent this sort of violence from occurring. There needs to be a broader system-wide approach that actually integrates a number of public sector agencies to rectify this.”

She said if the teacher involved in this incident was a union member, the union would support her through any investigative process that may take place.