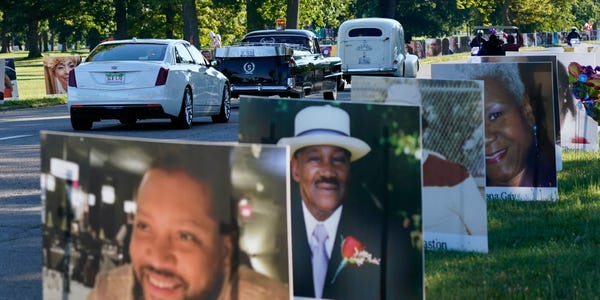 DETROIT (AP) — A Detroit island park was transformed Monday into a drive-thru COVID-19 victims memorial as policy makers across the U.S. moved forward with plans to reopen schools and public spaces.

Hearses led processions around Belle Isle Park in the Detroit River, where more than provided by relatives were turned into posters and staked into the ground.

As the death toll continued to rise around the world, officials announced plans to bring children back to school in Rhode Island, allow diners back inside New Jersey restaurants and let fans watch football inside an Iowa college stadium.

New COVID-19 cases were linked to travelers on vacation in Europe and the head of the World Health Organization cautioned against opening societies too quickly.

More than 847,000 people worldwide have perished from the virus and more than 25.3 million have contracted it, according to Johns Hopkins University — figures experts say understate the true toll due to limited testing, missed mild cases and other factors.

The pictures in the Detroit park showed those who died of COVID-19 during better times: Darrin Adams at his college graduation; Daniel Aldape catching a fish; Shirley Frank with an Elvis impersonator; and Veronica Davis crossing the finish line at a race.

They had "dreams and plans and a story," Michigan Gov. Gretchen Whitmer said at the park. "They weren't finished yet."

The region's classical music station added gospel music to its playlist and read the names of the deceased.

Detroit's director of arts and culture, Rochelle Riley, said officials hope the memorial will "wake people up to the devastating effect of the pandemic" and also "bring some peace to families whose loved ones didn't have the funerals they deserved."

The national COVID-19 death toll increased by 305 Monday, boosting the U.S. number of deaths to 183,258, according to Johns Hopkins.

Ex-NYPD cop gets one day in jail, probation for lying to grand jury