Google’s argument over third party cookies which it used to win its Supreme Court case contradicts another ongoing case on its ‘Privacy Sandbox’, it was alleged today.

An alliance of tech businesses, advertisers and publishers known as ‘Movement for an Open Web’ has claimed that Google said in the first case that third party cookies were no threat to privacy – but, in the second case, it says they are.

It comes after the UK’s highest court yesterday blocked a £3billion lawsuit against the US tech firm over claims it secretly tracked millions of iPhone users’ web activity.

If the case had been successful, more than four million Britons would have received damages of up to £750 each for alleged breaches of the Data Protection Act.

But the Supreme Court ruled former Which? director Richard Lloyd had failed to prove that ‘material damage or distress’ had been caused to individuals as a result.

Now, Movement for an Open Web. also known as MOW, has claimed yesterday’s outcome at the Supreme Court was ‘not quite the triumph Google might claim’.

Google is planning to replace so-called third party cookies with a new ‘Privacy Sandbox’. The company’s headquarters at Mountain View in California are pictured

It said the court held that a mere collection of data is not an invasion of privacy – so the mass claim could not proceed, in a finding that might look to benefit Google.

However, in reaching its decision, the UK’s highest court found Mr Lloyd had failed to prove an infringement of privacy law arising from the mere collection of data.

And a MOW spokesman said today: ‘Put simply – it wasn’t clear that the setting of third-party cookies by Google involved any invasion of privacy contrary to law.’

Google is planning to replace third party cookies with a new ‘Privacy Sandbox’. It means that instead of these traditional cookies, where advertisers can track individuals across the websites they visit, users will be split into cohorts.

But MOW claims this would restrict open web competition by reducing the amount of information other tech, advertising and publishing firms can gather on users. 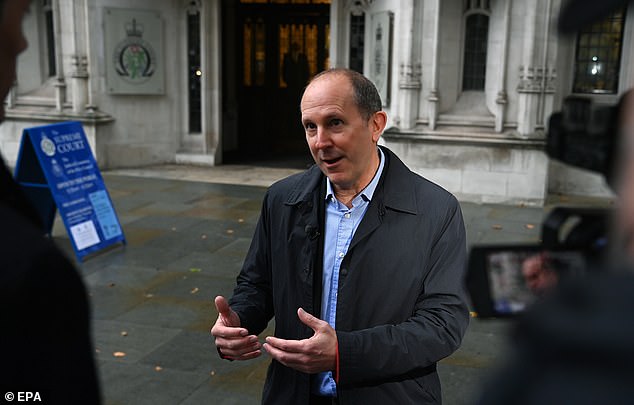 The Supreme Court yesterday ruled that claimant, former Which? director Richard Lloyd, had failed to prove that ‘material damage or distress’ had been caused to individuals

It said the Californian firm will also increase the value of data it gets from sources uniquely available to it through integrated services such as search functions.

And the MOW spokesman added: ‘Google is just trying to rig the system to its own benefit against its competitors.’

In September, MOW lodged a formal complaint with the European Union over Google’s next generation of its ‘Privacy Sandbox’ system.

‘This doesn’t reduce Google’s data collection but simply requires businesses that rely on data for advertising to obtain it via Google.

‘Increased dependence on Google is good for Google but restricts competition.’

James Rosewell, director of MOW, added: ‘The court’s verdict has found there is nothing intrinsically bad about businesses collecting data.

‘It also brings into question Google’s justifications for the Privacy Sandbox.’

MOW added that it was increasingly confident of moves by competition regulators in different jurisdictions to stop Google and other ‘big tech’ to control the web being upheld by the courts.

It pointed to the Google loss, also yesterday, of its challenge against a separate landmark decision taken by the European Commission in 2017.

The company was found to have ‘abused its dominant position’ by favouring its own price-comparison shopping service over smaller European rivals.

Mr Rosewell said: ‘This should force Google to reconsider what it’s doing, and work to create a genuine level playing field for all. We’re here to help them.’

The matter could be challenged again, however, if Google decides to turn to the EU’s highest court, the European Court of Justice, for a final say.

Google is facing further anti-trust lawsuits in the EU and US. In the UK, the Competition and Markets Authority is this month finalising an investigation and recommendations regarding the ‘Privacy Sandbox’, following a complaint last year from MOW.

A Google spokesman has been contacted for comment by MailOnline today.

Libyans forced to dig for water in backyards

Woman, 29, stabbed to death in Stoke after fleeing into street as man, 39, arrested for murder