Diego Maradona is “not well psychologically” and is being treated in hospital, his doctor has said.

The Argentinian football great, who turned 60 on Friday, has been “very sad for a week” and “didn’t want to eat”, according to one of his representatives.

“He is not well psychologically and that has an impact on his physical wellbeing,” Dr Leopoldo Luque told reporters. 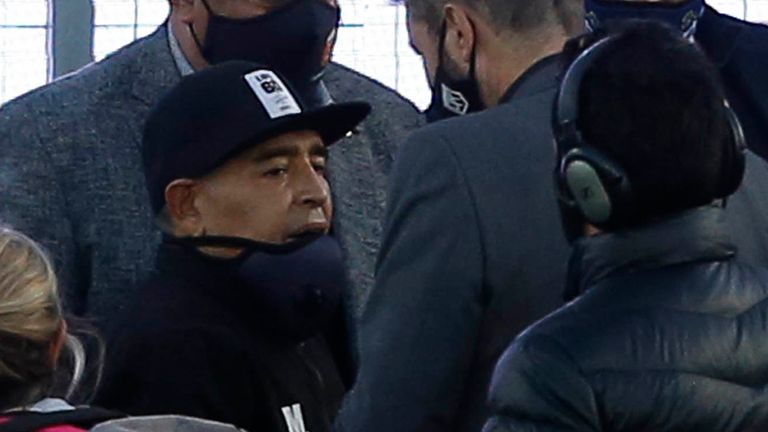 The captain of Argentina’s 1986 World Cup-winning team is reportedly having health checks at the Ipensa clinic in La Plata, about 25 miles south of Buenos Aires.

Dr Luque, who denied Maradona had contracted COVID-19, said his patient would be under observation for “at least three days”.

The star is currently managing Argentinian first division team Gimnasia y Esgrima, and attended the club’s match against Patronato on his birthday, receiving a plaque and a cake.

But he left before the end of the first half, raising questions about his health.

Maradona “did not have energy” and his birthday “complicates it”, Dr Luque said.

He added: “My idea is to have him hydrated for three days, see the evolution and adjust the medication.

“Diego is a person who is sometimes excellent and sometimes not so much. He could be 10,000 times better, and bringing him here helps him. The former Boca Juniors, Barcelona and Napoli player is in a regular room at the clinic and can choose to go home whenever he wishes, Dr Luque said.

The footballer has suffered other periods of ill-health over the years.

In January 2019, he was admitted to hospital with internal bleeding in his stomach.

Help each other, pope tells prisoners at foot washing rite