Disney is under fire for shooting its new film Mulan in parts of China where the government is accused of serious human rights abuses.

The final credits thank a government security agency in Xinjiang province, where about 1m people – mostly Muslim Uighurs – are thought to be detained.

The film was already the target of a boycott after its lead actress backed a crackdown on Hong Kong protesters.

Disney has not commented on the row over the locations and the credits.

China says its detention camps in Xinjiang are necessary to improve security.

The live-action film, which is one of the biggest releases of the year, is a remake of the 1998 animated story of a young girl who takes her father’s place in the army.

But fans in some Asian countries called for a boycott after Chinese-born actress Liu Yifei made comments supporting Hong Kong’s police who have been accused of violence against pro-democracy protesters in recent months.

Then, on Monday, social media users noticed that in the credits Disney thanked a number of government entities in Xinjiang, including the public security bureau in the city of Turpan and the “publicity department of CPC Xinjiang Uyghur Autonomy Region Committee”. 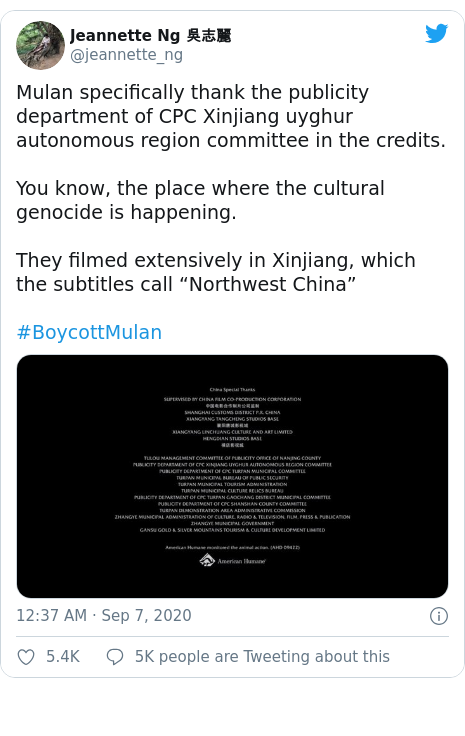 The public security bureau in Turpan is tasked with running China’s “re-education” camps where Uighurs are held in detention, China expert Adrian Zenz told the BBC.

The “publicity department” named by Disney is responsible for producing state propaganda in the region, he adds.

It is believed that one million Uighur people have been forcibly detained in the high-security prison camps in recent years.

Leaked documents and testimonies from camp survivors reveal that inmates are locked up, indoctrinated and punished, claims which China has dismissed as “fake news”.

In 2018 a BBC investigation found evidence of security compounds built in the desert in Xinjiang.

Mr Zenz described Disney as “an international corporation profiteering in the shadow of concentration camps”.

The World Uygar Congress tweeted “in the new Mulan, Disney thanks the public security bureau in Turpan, which has been involved in the internment camps in East Turkistan.”

Activist Shawn Zhang also criticised the company, writing “how many thousands of Uighur were put into camps by Turpan Bureau of Public Security when filming Mulan there?”

Turpan was the site of the first “re-education camps” where Uighur women wearing veils or men wearing beards were detained, Mr Zenz explained. The public security bureau is also responsible for managing construction of the camps and hiring police to staff them, he added.

The earliest evidence of “re-education” work of Uighurs in Turpan is from August 2013, Mr Zenz claims.

In June, he issued a report which uncovered evidence that China was forcing Uighur women to be sterilised or fitted with contraceptive devices, a practice that China denies.

China says it is fighting the “three evil forces” of separatism, terrorism, and extremism in Xinjiang and says the camps are voluntary schools for anti-extremism training.

In 2017 Mulan director Niki Caro posted photos on Instagram from the capital of Xinjiang. The production team behind the film also told the Architectural Digest magazine that they spent months in Xinjiang to research filming locations.