Doctors have rejected calls to work weekends to resolve the NHS crisis, saying it would harm their ‘work-life balance’.

NHS bosses have come under pressure to switch to a seven-day working rota to help clear a record backlog of seven million people waiting for vital tests and treatment. Former Health Secretary Lord Lansley told The Mail on Sunday: ‘We owe it to patients to provide the best possible care at weekends.’

His intervention follows a recent interview with kidney consultant Dr Andrew Stein on Radio 4’s Today programme in which he said chronic under-use of NHS equipment at weekends adds to the misery of millions awaiting tests and treatment.

‘In most hospitals in the UK, it’s like the Mary Celeste on a Friday afternoon,’ he said.

‘People start heading to the car parks at 12, and by 2pm it’s all quiet, and the hospital is not used to full capacity through the weekend.’ 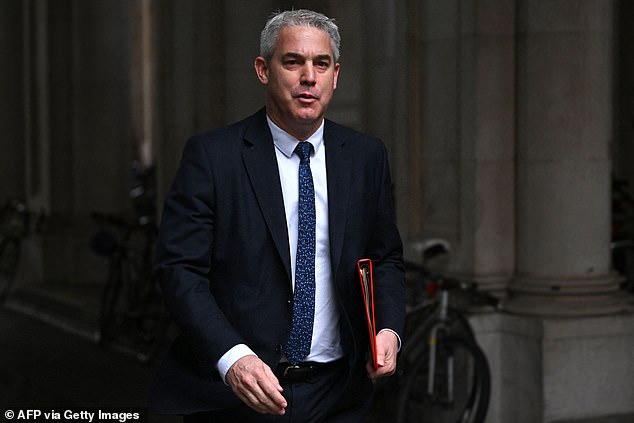 Last week Health Secretary Steve Barclay suggested doctors’ failure to work at weekends is fuelling the crisis because there are fewer decision-makers to discharge patients. But Dr Vishal Sharma from doctors’ union the British Medical Association hit back last night, saying a shortage of staff made the seven-day plan unworkable. He said: ‘It would not increase the number of patients that get treatment but would simply reduce the number of staff available during the week.

‘It would also result in staff working even more weekends than they currently do, with further detriment to their work-life balance without delivering any additional capacity.’

Previous analysis has found 86 consultants work in a typical hospital on an average Wednesday, but only 12 on a Sunday. Death rates for those admitted into hospital at the weekend are 14 per cent higher than those who go in during the week. Patients wait months to be seen but one in ten hospital beds – 13,200 – are occupied by patients who no longer need one.

The seven-day NHS plan was a key pledge made by David Cameron’s government. But it hit the buffers during a row with junior doctors, who threatened to strike over their pay deal. 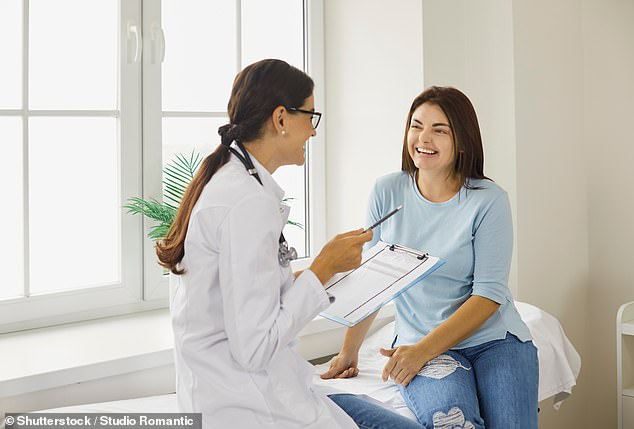 Lord Lansley said: ‘Ten years after David Cameron and I raised this problem, we have made nowhere enough progress in NHS hospitals providing seven-day services. We owe it to patients to provide the best possible care at weekends.

‘We owe it to them because we know those admitted on weekends tend to be sicker than those admitted during the rest of the week – so it is vital they are seen by experienced consultants.

‘We owe it to those now waiting for appointments and treatments, so that we can tackle the post-pandemic backlog as quickly as possible. However, we also owe it to the taxpayer – as seven-day working would be a much more efficient use of public resources.’

NHS sources said there are a record 100,000 job vacancies.

Lord Lansley said: ‘Of course, providing seven-day working across the NHS as a whole is entirely dependent on having the necessary staff – not only doctors and nurses but others like pharmacists as well. No one, certainly not me, minimises the scale of the health service’s staff problems. But at the moment, patients who should be discharged at weekends, which would free up much-needed beds, are left in hospital simply because the necessary staff are not available on Saturdays and Sundays.’ On the average weekday last month, hospitals across England discharged 10,211 patients. But that slumped by a third to 6,828 on the average Saturday or Sunday. 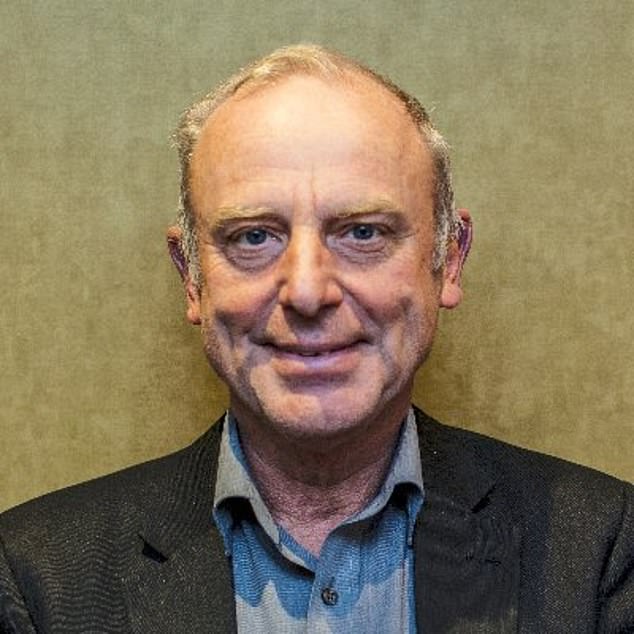 Respected consultant oncologist Prof Karol Sikora, pictured, said it was ‘criminal’ radiotherapy equipment worth millions was lying idle at weekends. He said: ‘Airport and rail staff work seven-day rotas, as do retail. Everybody else does it. Why should healthcare be different?’

Respected consultant oncologist Prof Karol Sikora said it was ‘criminal’ radiotherapy equipment worth millions was lying idle at weekends. He said: ‘Airport and rail staff work seven-day rotas, as do retail. Everybody else does it. Why should healthcare be different?’

Poor weekend staffing meant Rachel Mendez was treated with the wrong antibiotic for a serious infection, leaving her in ‘excruciating pain’ overnight. Ms Mendez, 54, from Bedfordshire, who is prone to urinary tract infections, said: ‘I always pray that it doesn’t happen at the weekend. I know I will have to wait so long to be seen and then even longer to be seen by the right consultant.’

By Stephen Adams, Medical Editor and Ethan Ennals for the Mail On Sunday

Patients who enter hospital at the weekend are far more likely to die than those admitted midweek, NHS figures reveal.

Getting the right treatment soon after admission boosts the chance of recovery, but delays potentially caused by an absence of senior staff on weekends – or lack of access to tests – can prove fatal.

However, a decade after the problem was first identified, the ‘weekend effect’ of higher death rates among people admitted on Saturdays and Sundays stubbornly persists. Across English hospitals as a whole, those admitted on weekends had a 14 per cent higher chance of dying than those admitted midweek in 2019, the most recent year for which NHS data is available.

There has been virtually no change since 2014, when the figure was 13 per cent.

These national averages mask considerable variation, with the weekend effect being much more pronounced at some hospitals – particularly those in more provincial areas, which tend to find weekend shifts harder to fill.

Yesterday, the staff car park at Cannock Chase Hospital, was almost totally empty. The hospital is run by The Royal Wolverhampton NHS Trust, which has the highest rate of deaths for weekend admissions in the country, according to the latest official figures. 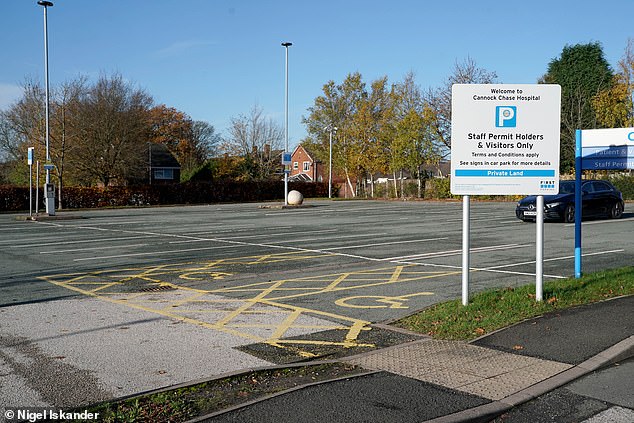 Yesterday, the staff car park at Cannock Chase Hospital, pictured, was almost totally empty. The hospital is run by The Royal Wolverhampton NHS Trust, which has the highest rate of deaths for weekend admissions in the country, according to the latest official figures

The chance of death was 46 per cent higher among weekend admissions in 2019. The same was true at Isle of Wight NHS Trust. Wolverhampton topped the list the previous year as well.

Debate rages about whether short-staffing at weekends is to blame – or if those admitted between Friday night and Monday morning are simply sicker than average. As Health Secretary a decade ago, Jeremy Hunt was convinced the former was true, as was Professor Sir Bruce Keogh, England’s most senior NHS doctor at the time.

But in the mid 2010s, amid growing resistance to seven-day working from doctors, a flurry of studies called this into question.

The study found that, despite there being far fewer specialist doctors on duty at weekends, this did not affect mortality.

But critics argue it defies logic that poorer staffing has no detrimental effect.

They also say the study was just one of many, which have produced conflicting results.

Peter Walsh, chief executive of the campaign group Action against Medical Accidents, said: ‘Staffing levels at weekends is a known safety issue and has been so for years. Unfortunately, you can’t choose when you need a hospital. A modern-day NHS should be able to keep people safe as well at weekends as during the week.’

Intensive care specialist Dr Ron Daniels, founder and chief executive of charity UK Sepsis Trust, said: ‘The NHS service you can expect to receive on the weekend is vastly different to what you would get during the week.’

He added: ‘There are many scans and investigations which you just can’t have when it’s the weekend because the staff aren’t there to perform them.’

Blood culture tests take longer to come back, he said.

This ‘can have dangerous consequences’ for some patients, he added, ‘as we don’t know what antibiotics they need.

‘It is inequitable that someone who gets ill on the weekend should be treated worse than in the week.’

A Department of Health and Social Care spokeswoman said: ‘We expect Trusts to provide a high-quality service seven days a week and are giving £6.6 billion to the NHS over the next two years to tackle the backlog and improve urgent and emergency care.

‘The Health and Social Care Secretary has been clear patient safety must be at the heart of everything the NHS does and is committed to using data and working alongside staff to improve care.’ 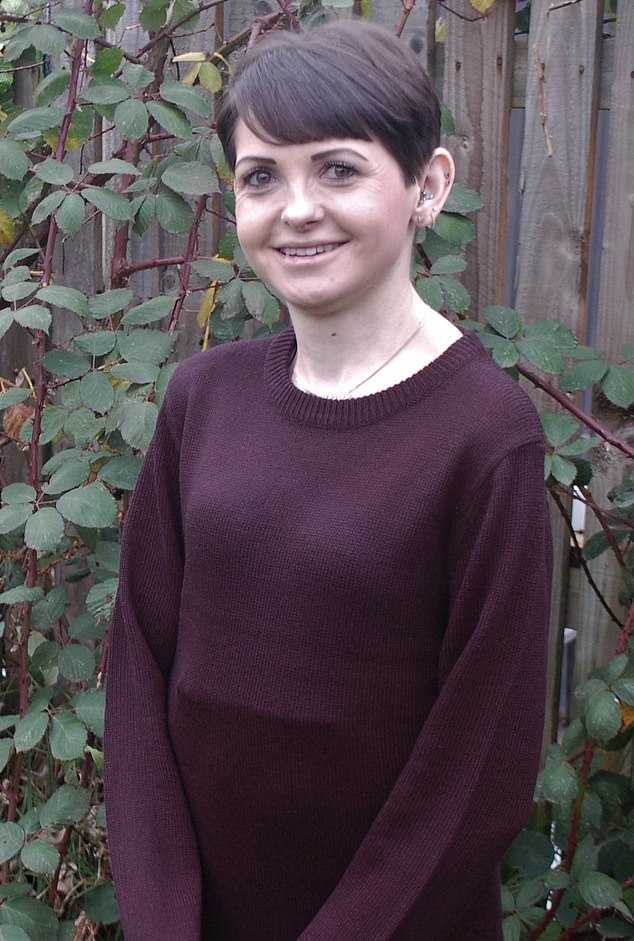 Lisa Jones, 41, pictured, who was born with complex medical problems, has been forced to stay on hospital wards over numerous weekends – despite being well enough to leave

Lisa Jones, 41, who was born with complex medical problems, has been forced to stay on hospital wards over numerous weekends – despite being well enough to leave.

She could not leave hospital because the staff were not there to discharge her.

Ms Jones, from Salford, who suffers frequent infections from being fitted with a permanent feeding pipe called a PEG tube, said: ‘When I’m in hospital, I just want to get home as quickly as possible. But you can’t get a new prescription or test results when it’s the weekend – you have to wait until Monday. So that means I can’t leave.’

She added: ‘If it gets to Friday and I’m still on the ward, I know I’m staying in for another two days.

‘I love the NHS and I owe them my life, but it would make a lot more sense if things could get done at the weekend.

‘It doesn’t seem right that I’m taking up a bed that someone who is really unwell could have.’

El Salvador woman jailed for 30 years for 'homicide' after miscarriage