The past 48 hours have seen a relentless, short-sighted, reckless and self-interested bullying of Premier Dan Andrews. Thankfully he shows little sign of bowing to the media and corporate pile-on. 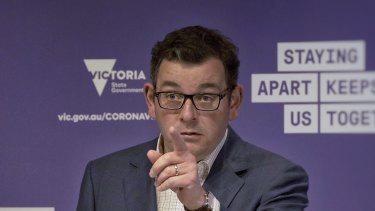 Daniel Andrews says he had no choice but to keep Victoria in lockdown.Credit:Luis Enrique Ascui

As is abundantly clear, unless you were choosing not to listen, the Andrews government has reluctantly adopted the least-worst option for Victoria.

The Premier has repeatedly said this is not a popularity contest and his decisions will be guided by medical advice and data, not hectoring, exaggerated claims of economic fallout or personal abuse.

To allow policy to be driven by coarse bellowing voices instead of evidence is a path to Trumpism. And we can see how well that is going.

Multiple business representatives have in recent days claimed that there are companies looking to abandon Victoria and move their headquarters elsewhere. Really? Which ones? A serious business would choose to go through all that disruption just because of a temporary extension of a lockdown? Unlikely.

First, I would like to see some evidence. Second, if indeed there is a business that intends to move, their connection to the Victorian economy must have been quite superficial. And beware those that make those claims only in order to try to flush out some taxpayer subsidy or grant.

Undoubtedly there are many small and even large businesses that are struggling and some will go under. That happened last year too, and every other year. Likewise, landlords both residential and commercial will suffer from the prolonged retail closures.

Those property investors with highly geared portfolios dependent on precarious cash flow to survive may well be swamped by this wave. But do not confuse those with the entire Victorian economy.

The overwhelming narrative in most of our media is doom and gloom. But banks are not seeing the mortgage defaults that were predicted – not yet, anyway. Bankruptcies are not soaring. The Coroner has clarified that suicides are no greater in number this year than last year. Discretionary spending is way down, but that is the point – it is discretionary.

The fundamentals of the Victorian economy are unchanged. We are a major economy, a society of great sophistication and diversity. We have absorbed the shock from the closure of the car industry better than predicted and will recover from this shock too. We will still shop, eat in restaurants, drink in bars and go to cinemas. Regional tourism will boom, as will regional and coastal real estate.

Granted, this extension of lockdown and the gradual re-emergence is unpleasant, expensive and challenging. But not catastrophic. Apart from the disingenuous nature of the claims, the simple exaggeration of the impact is undermining confidence essential to the recovery.

Those prosecuting their self-interested claims must be asked if they are prepared to take responsibility for the damage their probably spurious claims cause to public confidence. Calling for the Commonwealth to intervene and sack the state government? Really? An idiotic claim, bordering on irresponsible and mendacious.

Are some of these claims coming from the same quarters as those corporate organisations that are paying bonuses and dividends to themselves after claiming they were dependent for survival on JobKeeper? A rort is a rort no matter how you dress it up. My anger is not directed at a premier and his team who are doing their best in trying circumstances but at those who are sensing an opportunity to line their own pockets and profit from a crisis.

But those mistakes, terrible as they are, do not disqualify the government from governing. For the opposition to call on Dan Andrews to resign, for the Morrison government to try to force Andrews to go against medical advice, is as astonishing as it is reckless. The Premier may be wounded, but is not walking away.

Will Scott Morrison accept responsibility for a Europe-style third wave if it eventuates? Or would the PM accept as much responsibility for that as he has for the disaster of aged care? Or the rorting of JobKeeper? Or the failure of the water buyback scheme? Or the attacks on industry super that jeopardise their participation in the recovery? Or the disclosures in this newspaper that Assistant Treasurer Michael Sukkar was using taxpayer-funded electoral staff to wage internal Liberal Party wars?

Victoria and Melbourne are more than an economy. We are a society and a community. We do not measure our success or failure only according to a balance sheet. To seek to measure our wellbeing by economics alone is to misunderstand everything that this community has become. That those interests are dominating the debate is a sign of their muscle and media savvy, but not their deep connection to the people.

Victorians are far more resilient than that.

Jon Faine is a former presenter on ABC 774.

Iranian commander warns US, allies, 'We will destroy you'