Startling new satellite images have showcased the extent of the damage at a Russian air force base in Crimea after devastating explosions ravaged the site on Tuesday afternoon.

The broken and charred remains of several Russian fighter jets can be seen in the aftermath of the blasts which are believed to have damaged up to 20 aircraft and demolished ammunition storage facilities.

Russia denied any aircraft were damaged in Tuesday’s blasts – or that any attack took place.

But photos published by US-based satellite imaging company Planet Labs PBC clearly showed at least seven fighter planes at the base had been obliterated in what is widely thought to have been a Ukrainian strike.

Ukrainian officials stopped short of publicly claiming responsibility for the explosions, but confirmed at least nine planes had been destroyed and mocked Russia’s explanation that a careless smoker might have caused ammunition at the Saki air base to catch fire and blow up.

If Ukrainian forces were, in fact, responsible for the blasts, it would be the first known major attack on a Russian military site on the Crimean Peninsula, which the Kremlin annexed from Ukraine in 2014.

Russian warplanes have launched untold numbers of strikes on Ukraine’s southeastern regions from the Saki airbase. 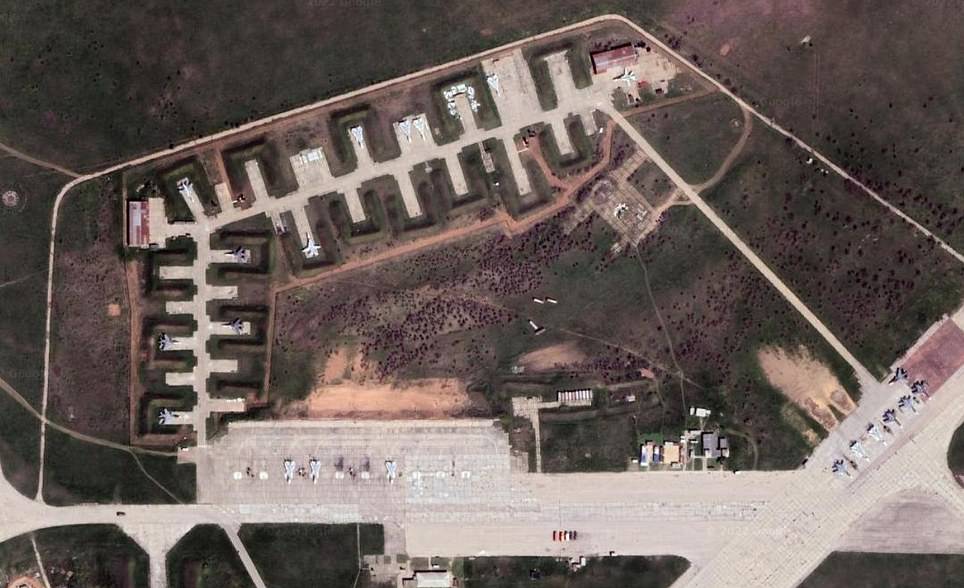 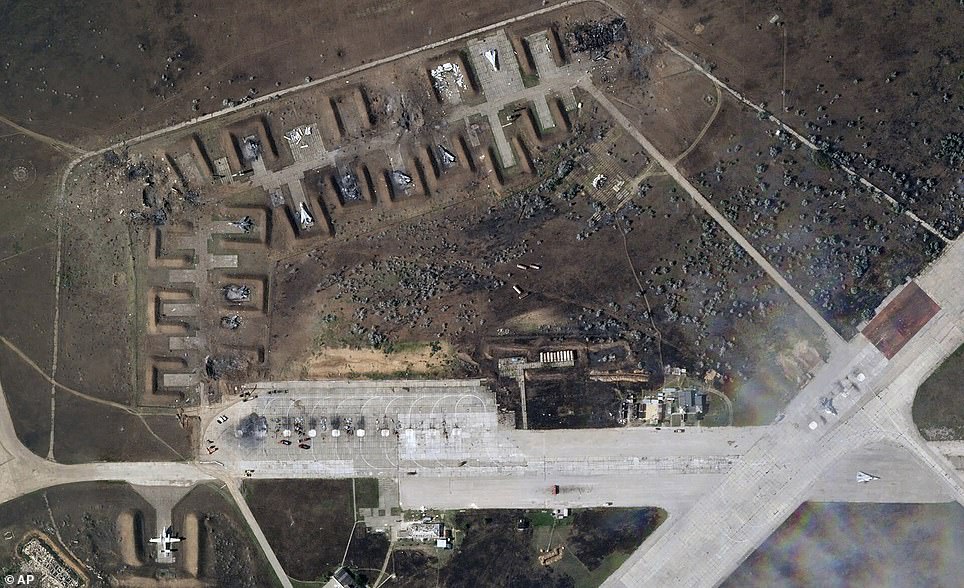 These images, taken before (L) and after (R) Tuesday’s blasts, show how several Russian fighter jets were destroyed. The wreckage of up to seven aircraft are clearly seen, with reports putting the total number of damaged planes as high as 20 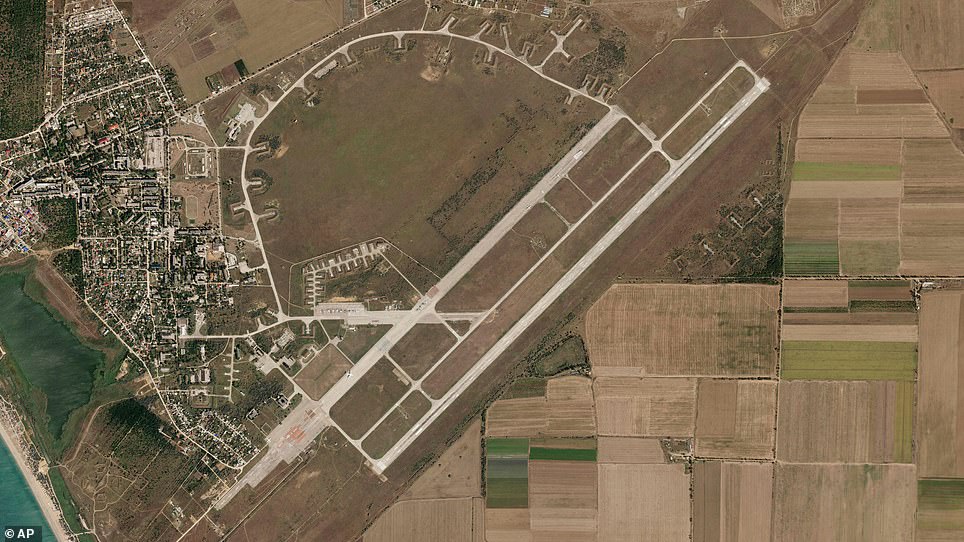 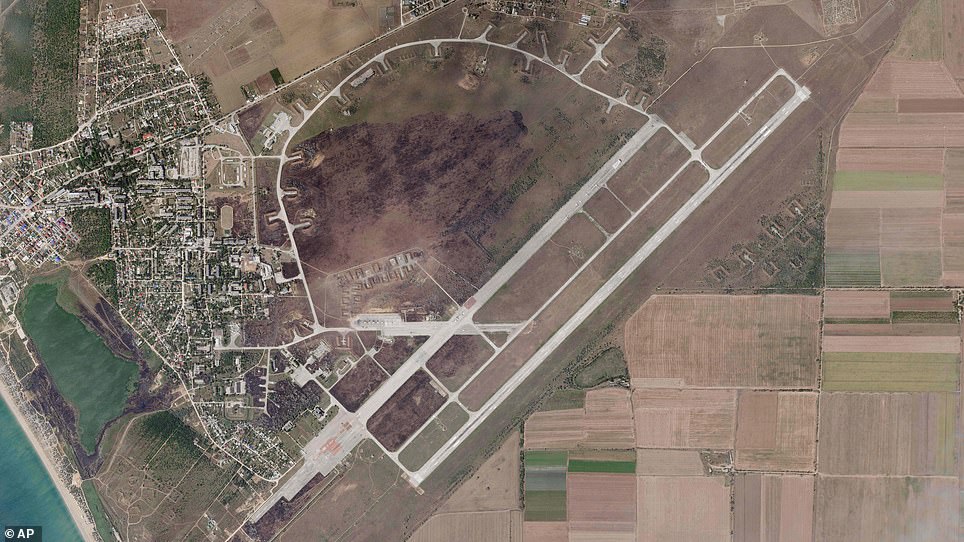 Huge swathes of scorched earth can be seen in this image (right) of the Saki airbase following the blasts earlier this week. Images taken before the explosions (left) show untouched grassland 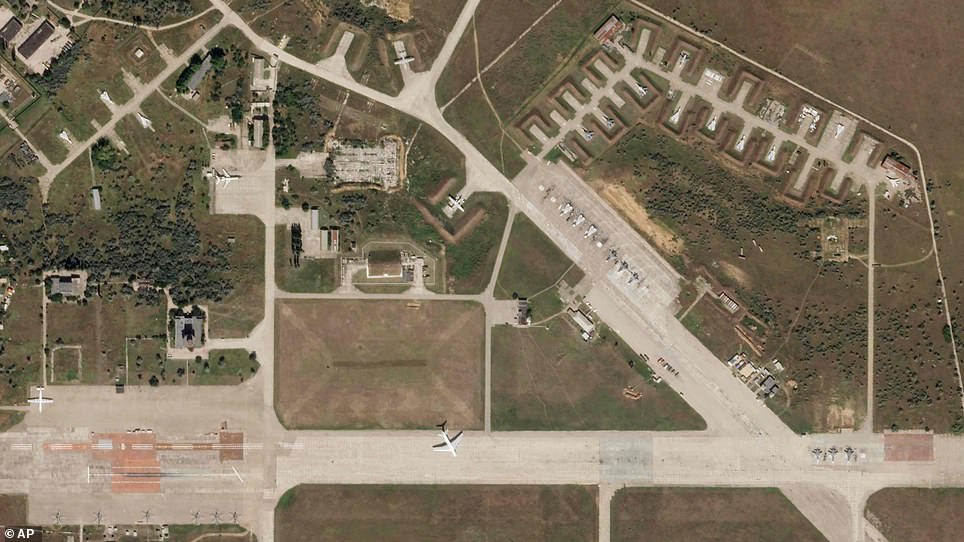 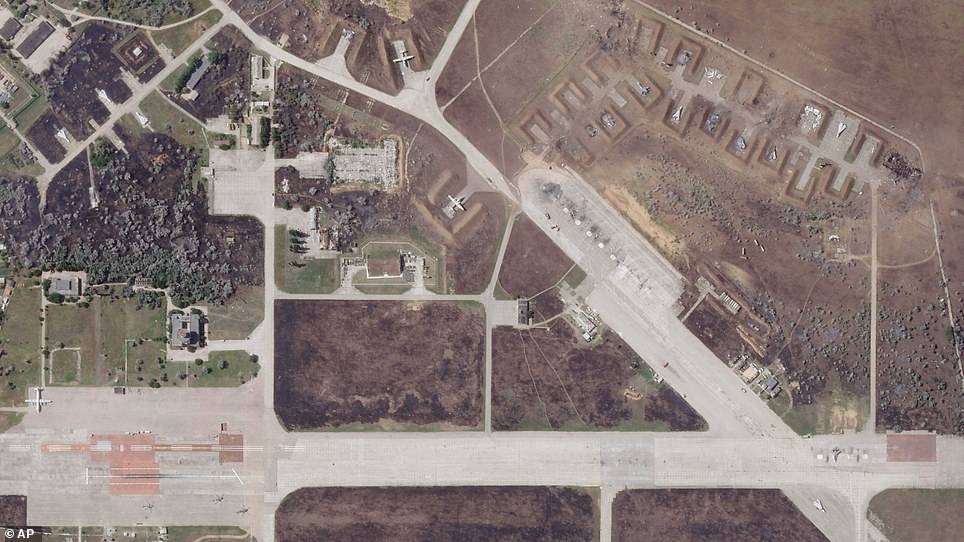 These images, taken before (L) and after (R) the suspected Ukrainian attack, show how multiple airplanes were left devastated with multiple craters adorning the base. The runways however look largely undamaged 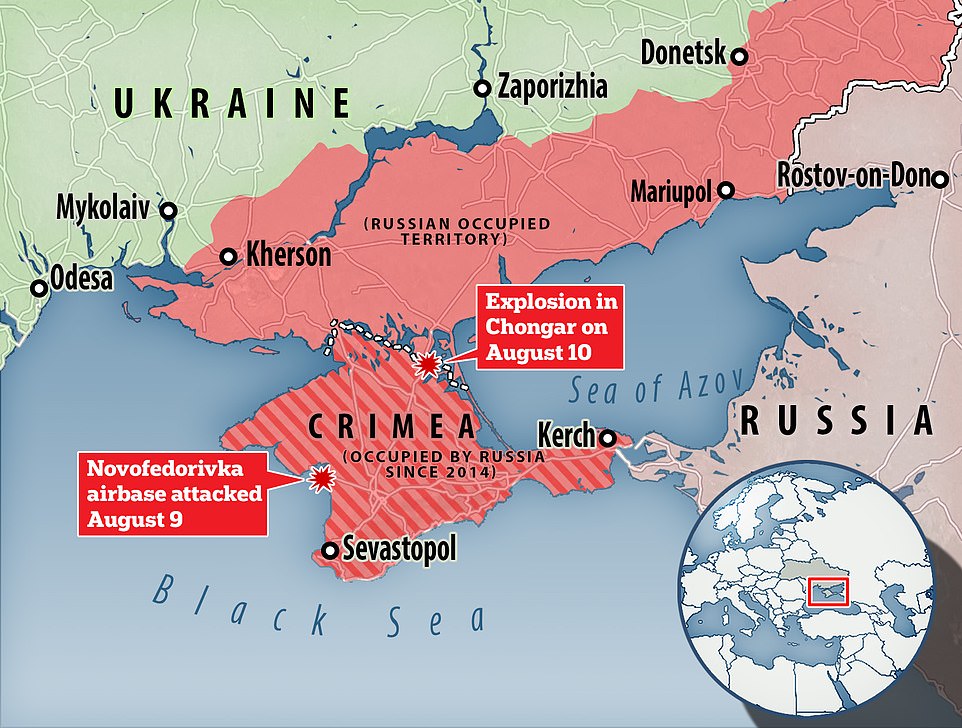 The explosions caused significant damage at the Saki/Novofedorivka airbase in Western Crimea – a key strategic location from which Russia has launched jets to deliver strikes across southeastern Ukraine. Another explosion, thought to be a Ukrainian attack, rang out yesterday in the northern Chongar region 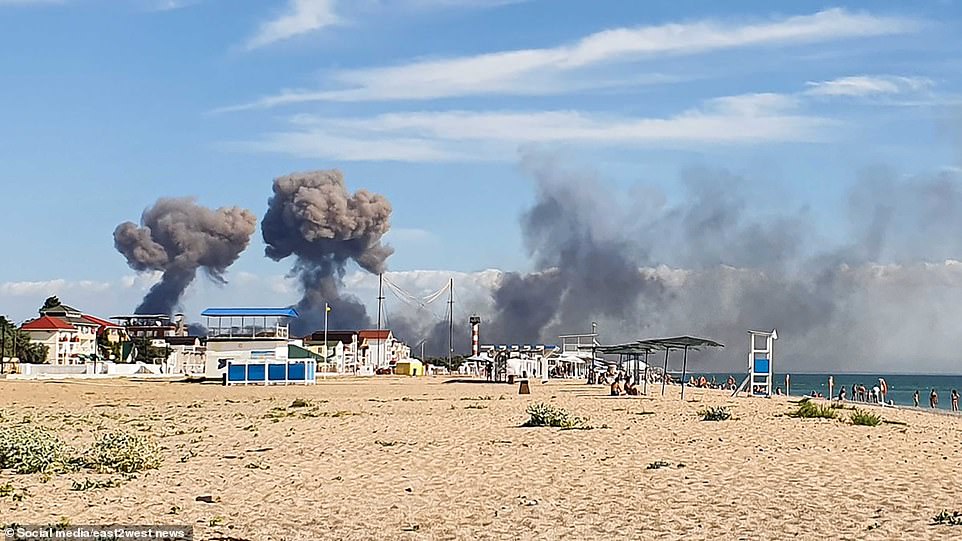 The explosions, which killed one person and wounded 14, sent tourists fleeing in panic from a nearby beach as plumes of smoke snaked along the coastline 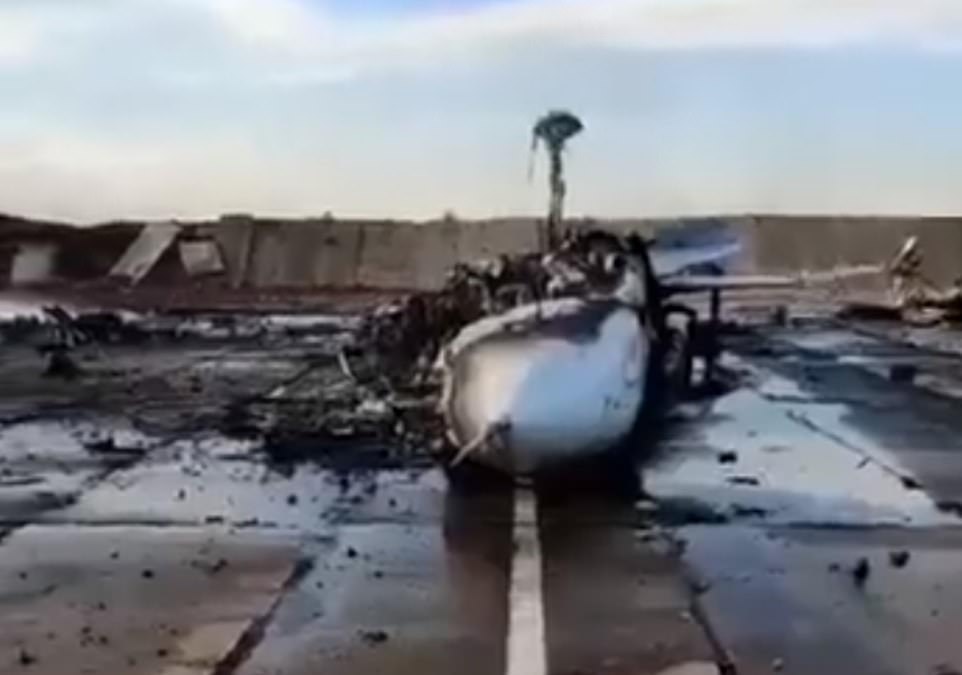 This still, taken from a video, shows the remains of a Russian fighter jet in the immediate aftermath of the suspected Ukrainian strike on Tuesday

Planet Labs’ photographs taken on Wednesday afternoon roughly 24 hours after the explosions showed some roughly one square mile of grassland burned at the Saki base.

Several craters marked the ground near the tarmac – typically the sign of a powerful explosion – and the smouldering wreckage of several jets are clearly visible.

The two runways meanwhile bore no apparent damage and appeared to still be operational, while some of the fighter jets on the flight line had been moved farther down the runway and had seemingly escaped the explosions.

The base has been home to the Russian 43rd Independent Naval Assault Air Squadron since Moscow seized Crimea.

The squadron flies Sukhoi Su-24s and Sukhoi Su-30s and has been instrumental in delivering air support and strikes across southeastern Ukraine.

Crimea holds huge strategic and symbolic significance for both sides.

The Kremlin demands that Ukraine recognises Crimea as part of Russia as a key condition of any potential ceasefire agreement.

Ukraine has vowed to drive the Russians from the peninsula, with president Volodymyr Zelensky declaring earlier this week: ‘Crimea is Ukrainian, and we will never give it up… The Russian war against Ukraine and the whole of free Europe must end with Crimea and its liberation.’

The explosions, which killed one person and wounded 14, sent tourists fleeing in panic from a nearby beach as plumes of smoke snaked along the coastline.

Videos circulated on social media showed shattered windows and holes in the brickwork of some buildings, with cars close to the airbase devastated in the blasts.

One tourist, Natalia Lipovaya, said that ‘the earth was gone from under my feet’ after the powerful blasts. ‘I was so scared,’ she said.

Sergey Milochinsky, a local resident, recalled hearing a roar and seeing a mushroom cloud from his window. ‘Everything began to fall around, collapse,’ he said.

Crimea’s regional leader, Sergei Aksyonov, said some 250 residents were moved to temporary housing after dozens of apartment buildings were damaged.

Russian authorities sought to downplay the explosions, saying Wednesday that all hotels and beaches were unaffected on the peninsula, which is a popular tourist destination for many Russians.

But video posted on social media showed long lines of slowly moving cars on the road to Russia as tourists headed for home.

A Ukrainian presidential adviser, Oleksiy Arestovych, cryptically said that the blasts were either caused by Ukrainian-made long-range weapons or the work of Ukrainian guerrillas operating in Crimea.

‘Official Kyiv has kept mum about it, but unofficially the military acknowledges that it was a Ukrainian strike,’ Ukrainian military analyst Oleh Zhdanov said. 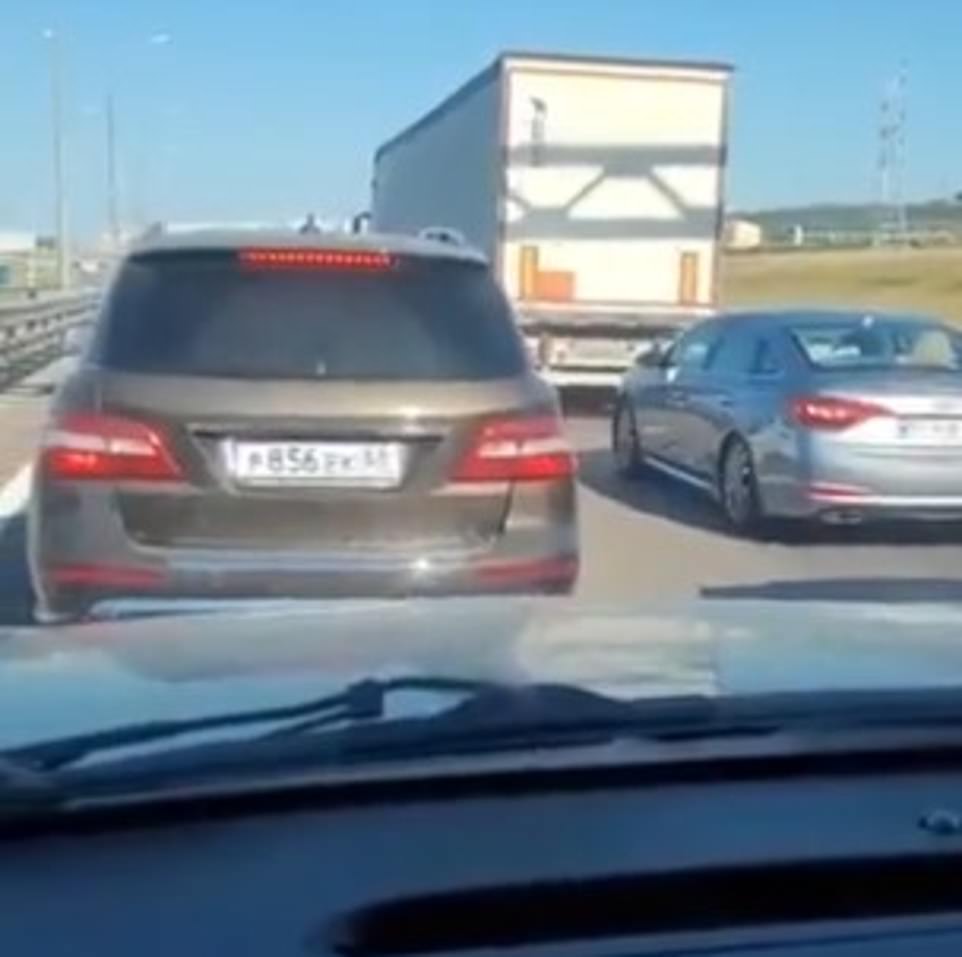 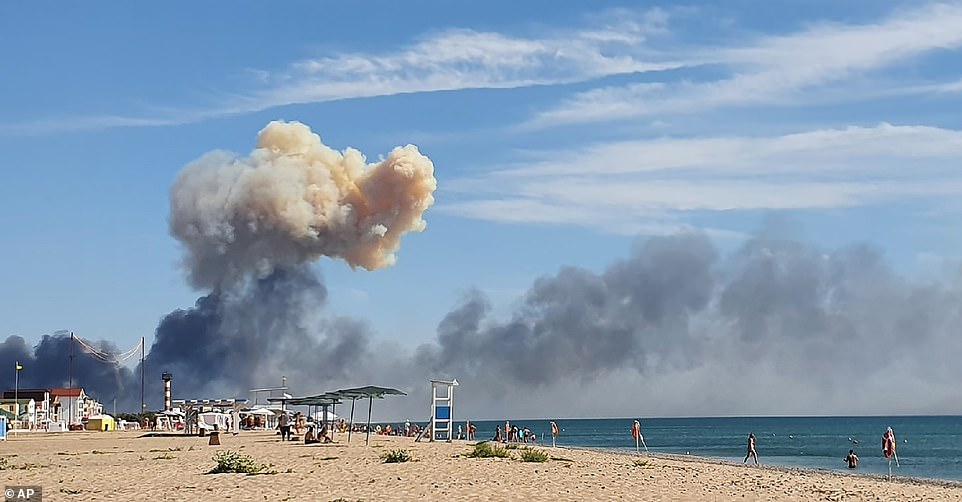 Rising smoke can be seen from the beach at Saky after explosions were heard from the direction of a Russian military airbase near Novofedorivka, Crimea, Tuesday Aug. 9, 2022 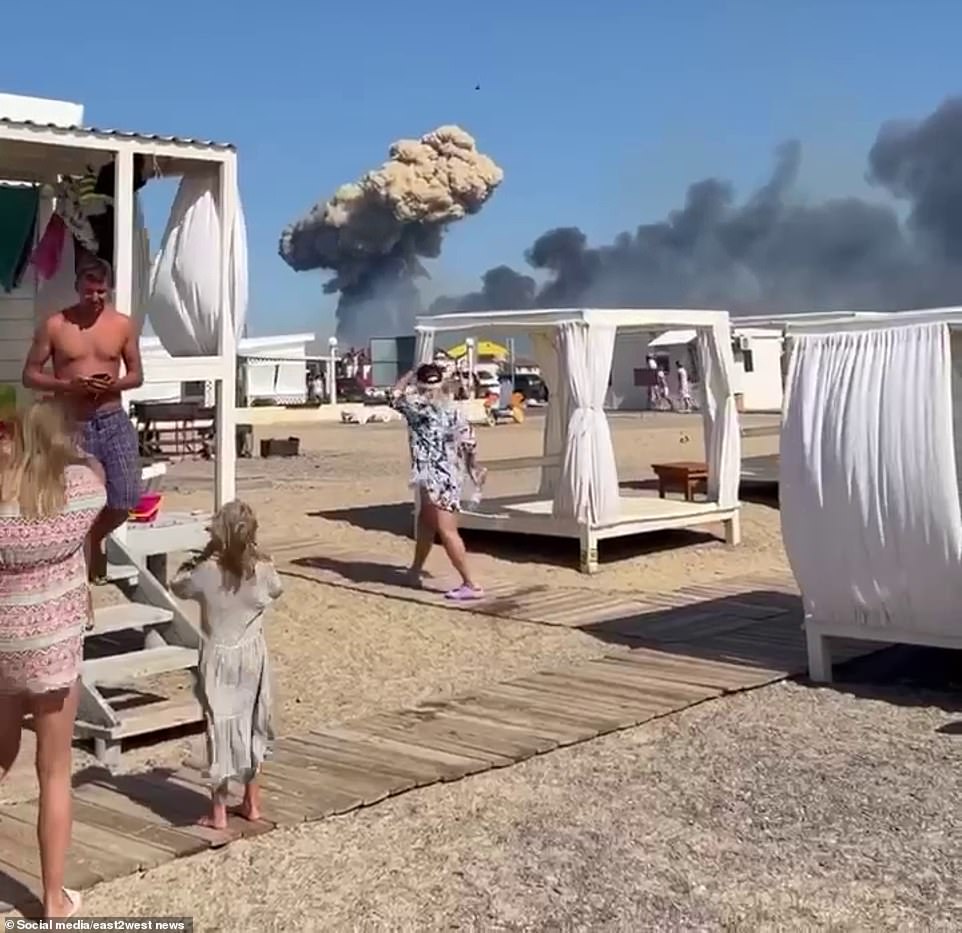 The base is at least 130 miles from the closest Ukrainian position. Zhdanov suggested that Ukrainian forces could have struck it with Ukrainian or Western-supplied anti-ship missiles that have the necessary range.

The Washington-based Institute for the Study of War said it couldn’t independently determine what caused the explosions but noted that simultaneous blasts in two places at the base probably rule out an accidental fire but not sabotage or a missile attack.

It added: ‘The Kremlin has little incentive to accuse Ukraine of conducting strikes that caused the damage since such strikes would demonstrate the ineffectiveness of Russian air defense systems.’

During the war, the Kremlin has reported numerous fires and explosions on Russian territory near the Ukrainian border, blaming some of them on Ukrainian strikes. Ukrainian authorities have mostly kept silent about the incidents, preferring to keep the world guessing.

Neither side has released much information about their own casualties. In his nightly video address Wednesday, Zelensky claimed nearly 43,000 Russian soldiers had been killed.

Colin Kahl, U.S. undersecretary of defence for policy, estimated Monday that Russian forces have sustained up to 80,000 deaths and injuries in the fighting. He did not break down the figure with an estimate of forces killed or provide a Ukrainian casualty count.

In other developments, Russian forces shelled areas across Ukraine on Tuesday night into Wednesday, including the central region of Dnipropetrovsk, where 13 people were killed, according to the region’s governor, Valentyn Reznichenko. 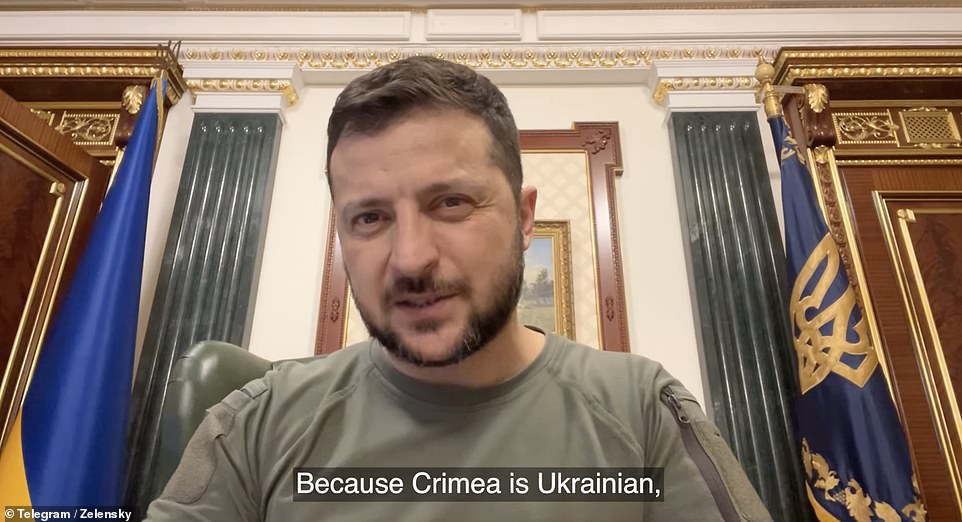 President Volodymyr Zelensky declaring earlier this week: ‘Crimea is Ukrainian, and we will never give it up… The Russian war against Ukraine and the whole of free Europe must end with Crimea and its liberation.’

Reznichenko said the Russians fired at the city of Marganets and a nearby village. Dozens of residential buildings, two schools and several administrative buildings were damaged.

‘It was a terrible night,’ Reznichenko said. ‘It’s very hard to take bodies from under debris. We are facing a cruel enemy who engages in daily terror against our cities and villages.’

In Ukraine’s east, where fighting has raged for eight years, a Russian attack on the center of the city of Bakhmut in the Donetsk region killed seven, wounded six and damaged stores, homes and apartment buildings, setting off fires, Ukraine’s prosecutor general said on Telegram. Bakhmut is a key target for Russian forces as they advance on regional hubs.

In the city of Donetsk, which has been under the control of Russia-backed separatists since 2014, Ukrainian shelling hit a brewery, killing one person and wounding two, the separatists’ emergency service said. It said the shelling late Wednesday caused a leak of toxic ammonia and warned people to stay inside and breathe through cotton gauze.

Two residents of the village of Staryi Saltiv in the Kharkiv region in the northeast were killed Wednesday in Russian shelling, police reported.

In the country’s southeast, Moscow’s forces continued shelling the city of Nikopol across the Dnieper River from the Russian-occupied Zaporizhzhia power station, the biggest nuclear plant in Europe. Ukraine and Russia have accused each other of shelling it, stoking international fears of a catastrophe.

On Wednesday, foreign ministers of the Group of Seven industrialized democracies demanded that Russia immediately hand back full control of the plant to Ukraine. They said they are ‘profoundly concerned’ about the risk of a nuclear accident with far-reaching consequences.

The U.N. Security Council scheduled an open meeting Thursday at Russia’s request on what it claims were Ukrainian attacks on the Zaporizhzhia plant. Rafael Grossi, the International Atomic Energy Agency chief who said last week that the situation at the plant ‘is completely out of control,’ was expected to brief the council.

Won by conquest, given away as a ‘gift’, now occupied by force: Russia’s history in Crimea and the Black Sea 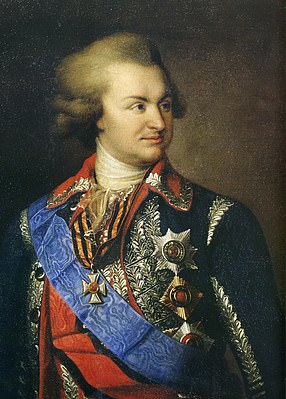 Prince Grigory Potemkin, who established the Black Sea Fleet in Crimea in 1783

The Black Sea – and the Crimean peninsula which juts into it – are a strategic crossroads between Europe, the Middle East and Asia which has been contested by Empires and nations for centuries.

For Russia to assert power in the waters, control of Crimea – which contains its main Black Sea port at Sevastopol and controls the Kerch Strait leading to the nearby Sea of Azov – is essential.

Crimea has, at one time or another, come under the control of the Greeks, Persians, Romans, Mongols, Ottomans.

It was not until 1783 that it fell fully under the control of the Russian Empire when Russian generals Alexander Suvorov and Mikhail Kamensky led a force of 8,000 men to victory against an Ottoman army of 40,000 at the the Battle of Kozludzha.

Russia’s Prince Grigory Potemkin quickly established the Russian Black Sea Fleet at the port of Sevastopol, from where he asserted naval power over the Black Sea, it neighbours including Georgia, Ukraine and Turkey, and projected power further into the Mediterranean.

Crimea also turned into a key trading post. On the eve of World War 1 in 1914 – some 50 per cent of all Russia’s exports and a full 90 per cent of its agricultural exports passed through Bosphorus Strait which leads out of the Black Sea.

In 1954 Crimea was given as a ‘gift’ by Nikita Khrushchev to Ukraine, ostensibly to mark the 300th anniversary of Ukraine’s merger with Tsarist Russia, but more likely to secure Ukraine’s support for Khrushchev’s leadership and to cement Ukraine as part of the Soviet Union.

Because Ukraine was then part of the Union, Moscow maintained control over Crimea and its vital ports – at least until 1991 when the union collapsed and Ukraine became and independent county.

Following Ukraine’s independence, access to the peninsula became a bargaining chip between the two nations, with Ukraine recognising Russia’s right to the port at Sevastopol in return for concessions such as writing off debts and taking control of part of the Black Sea fleet.

But in 2014, the pro-Moscow government of Viktor Yanukovych was overthrown in a popular uprising that wanted to draw the country closer to Europe.

Fearing the loss of the port at Sevastopol, Putin marched troops into Crimea and seized control of it – later holding a ‘referendum’ which showed majority support for the region to become part of Russia, though the result is viewed as far from credible.

Today, Moscow is in control of the peninsula and refers to it as part of its territory, though most world bodies refer to the region as ‘occupied Crimea’.

The Black Sea Fleet remains one of Russia’s largest and most formidable, thought to comprise a total of 47 ships, seven submarines and 25,000 troops, mostly marines.