Driver, 21, who posed for THIS sick selfie moments after head-on crash which put grandmother-of-nine in a wheelchair is jailed for two years

A 21-year-old driver who posed for a sick selfie after a head-on crash which put a grandmother-of-nine into a wheelchair has been jailed for two years.

Connor Young ploughed his modified Renault Clio into Barry and Jennifer Fleming’s Audi TT as the couple returned to Glasgow after an evening drive in June 2017.

The callous youngster then sat in his driver’s seat and snapped a sickening selfie while Mr Fleming struggled to free his hysterical wife from the wreckage.

Mrs Fleming, 48, had her right ankle snapped, her left foot injured and still faces amputation of her right leg. 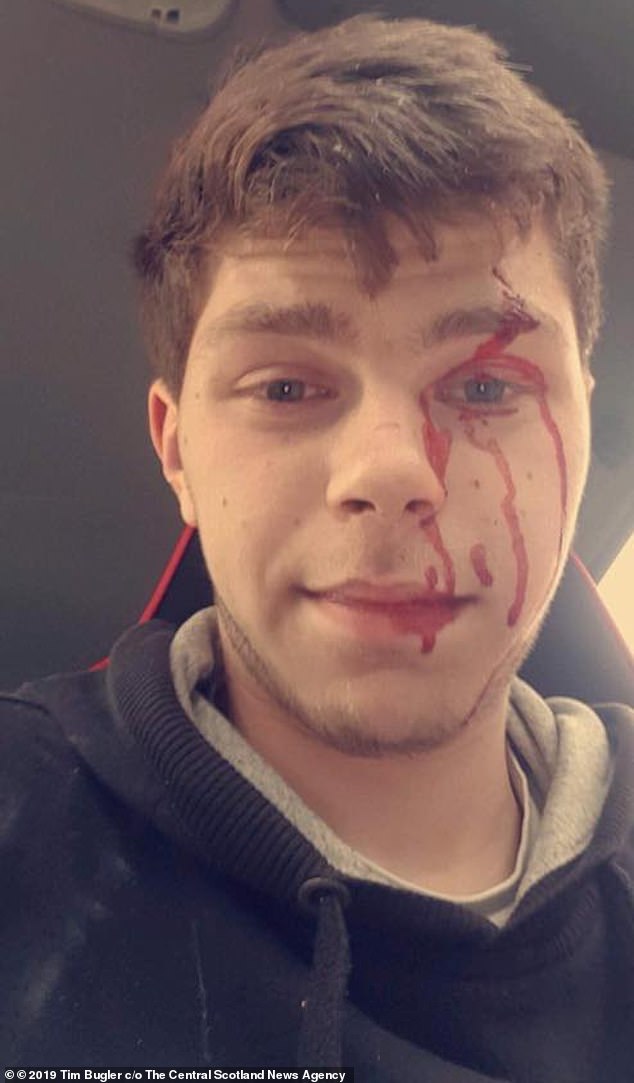 Connor Young, 21, took this selfie from the driver’s seat of his souped up Renault Clio, while Barry Fleming struggled to free his wife Jennifer from their crumpled Audi TT in June 2017 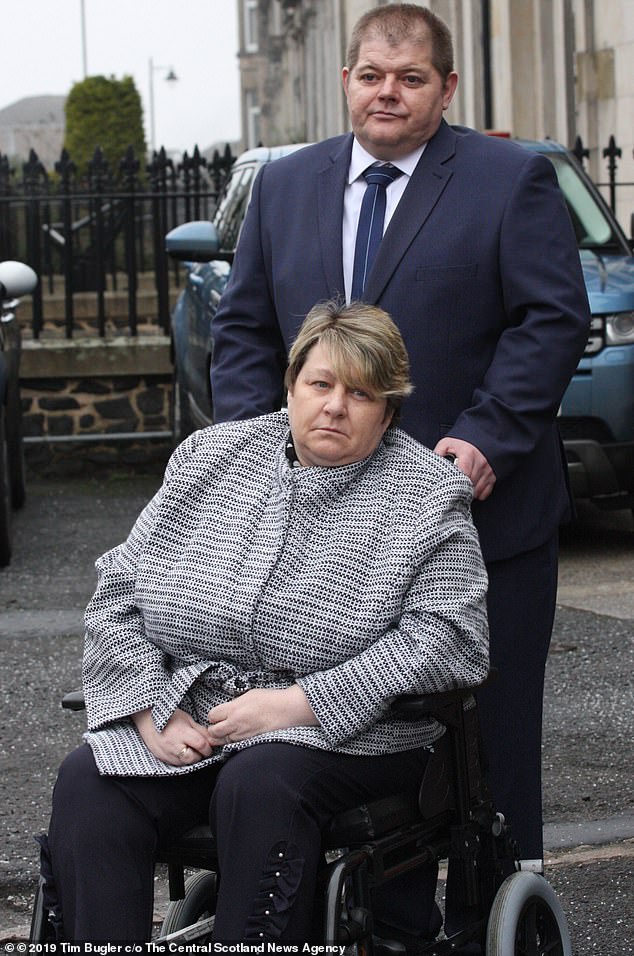 Mr and Mrs Fleming outside Stirling Sheriff Court, Mrs Fleming may still need to have her right leg amputated as she remains in a wheelchair nearly two years on from the horrific crash 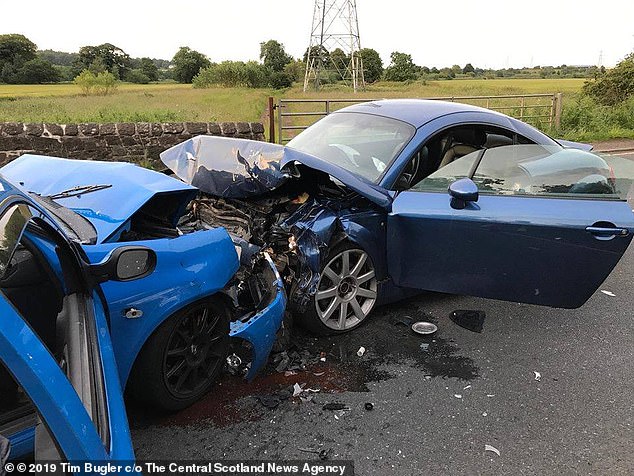 She spent days in hospital and was left with PTSD after the ‘extreme pain.’

Her husband, 40, sustained a fractured sternum, collapsed lung, and injuries to his knee and shoulder, spent five nights in hospital, and may also face further surgery.

Mr Fleming said Young’s car – which witnesses said had a ‘very loud exhaust’ – had appeared suddenly in front of him as the youngster swerved across double-white lines to overtake.

Mr Fleming said he managed to get out, and pulled his wife’s door open.

He said: ‘She tried to get out but just fell because the bone was protruding out of the side of her leg.’

He said he looked over to where Young was sitting in his Clio, holding his phone in front of his face.

A copy of the selfie he took was shown to the jury.

Sheriff Simon Collins said it was ‘doubtful at best’ that they would ever fully recover, and Mrs Fleming’s injuries were ‘life changing’.

The collision, on the twisting single-carriageway A833 road not far from the Falkirk Wheel, occurred about 9.10pm on June 28, 2017.

He had denied the charge, claiming he was merely driving carelessly, and maintained his position in a pre-sentencing interview.

Sheriff Collins said: ‘He told social workers, that while regretting the injuries to Mr and Mrs Fleming, it was an “unfortunate accident” – 15 members of the jury were satisfied his driving was dangerous.’

He added: ‘In particular this was the result of excessive speed. He was repeatedly overtaking or attempting to overtake when it was unsafe over a relatively long distance.

‘Ultimately he crossed double-white lines on a blind bend causing a head-on collision that Mr Fleming, the driver of the other car, was powerless to prevent.

‘It is surprising, perhaps extremely fortunate, that no-one was killed.’

He rejected a plea from Young’s solicitor-advocate, Martin Morrow, to keep his client out of jail. 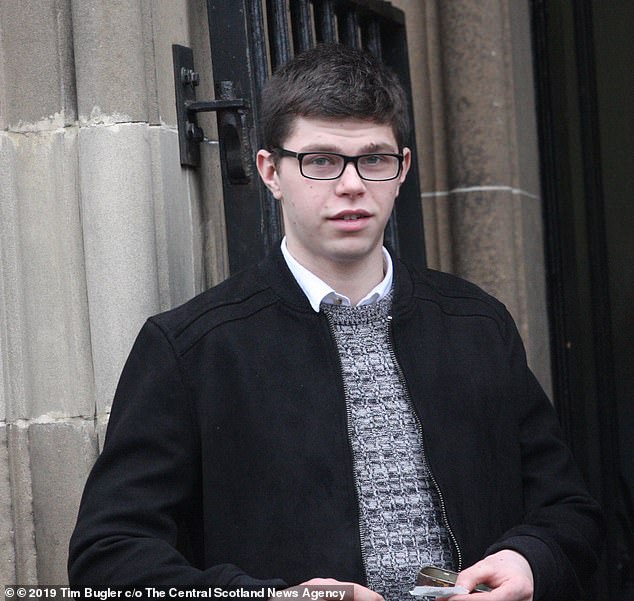 Mr Morrow said Young came from a ‘decent’ family and had good educational qualifications and had been assessed as ‘vulnerable in exposure to a prison environment’.

He told the sheriff: ‘That has a certain resonance. Your Lordship will be aware of the recent difficult case of young lady who was unable to cope with the prison environment and committed suicide.’

In addition to the jail term, Young was banned from driving for three years. He showed no emotion as he was handcuffed by a police officer and led to the cells, but his mother wept on the public benches.

Outside court, Mrs Fleming said: ‘Hopefully in jail he’ll learn a lesson about his driving. He has ruined our lives.’

Her husband called for the law to be changed so dangerous young drivers faced tougher sentences. He said: ‘The system is wrong. I think he deserved five years. That car in his hands was like a loaded gun.’

Last month, weeping as she gave evidence from her wheelchair, Mrs Fleming said it had been ‘a lovely evening’ and she and Barry, who was driving, had just turned back towards Glasgow when the collision occurred.

She said: ‘I remember Barry just saying to me “Jen!” and I looked up and saw the car was coming head-on.

‘I didn’t even have time to say my husband’s name back to him before he crashed into us.

‘Now I can’t even push my two smallest grandchildren in a pram.’