Drunk Premiership rugby star, 26, who threatened to rape female police officer and headbutted her male colleague shouting ‘Do you know who I am, c***s?’ avoids jail

Mark Jennings, 26, (pictured leaving Manchester Magistrates court yesterday) also head-butted one PC and shouted ‘f**k off and get out’ after embarking on a violent, foul mouthed and lager fuelled rampage

A Premiership rugby union star who threatened to rape a female police officer and headbutted her male colleague, shouting ‘Do you know who I am, c***s?’, has avoided jail.

Mark Jennings, 26, told the officers to ‘f**k off and get out’ after embarking on a violent, foul mouthed and lager fuelled rampage when officers tried to question him about an argument with his girlfriend at his £475,000 family home.

Jennings, a six foot tall, 15 stone father-of-one, who played as a winger for Sale Sharks told the female police officer he was going to rape her after he was escorted into the back of a police van and awaiting being transferred to police cells, a court heard.

Although colleagues were in the vehicle with her, the police officer said she was fearful of what might happen to her and claimed his outburst had knocked her confidence. The male officer was head-butted in the chest and suffered no injuries.

In a statement the policewoman said: ‘I don’t think I should be subject to that kind of abuse while doing my job. I was in the police van with Mark Jennings and he kept banging his head on the way to the station.

‘As a police officer, I have experienced abuse and insults on a number of occasions, but nothing like this. If I was called out for another job involving Mark Jennings, I wouldn’t feel safe.

‘He has completely knocked my confidence. As a professional athlete, he is a role model for children and I don’t think that somebody who acts like he did should be in a such a position.’ 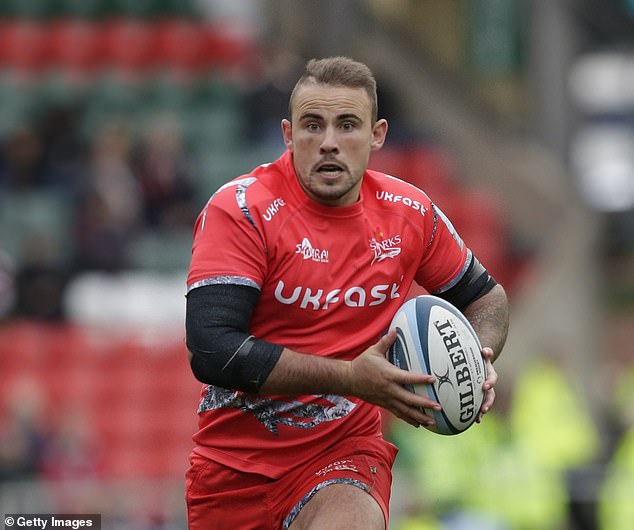 Mark Jennings in action for Sale Sharks during a match between Leicester  Tigers and Sale Sharks. He later blamed his behaviour on a previous history of consuming drink and drugs

Jennings who lives in luxury terraced property in Hale, near Altrincham, Greater Manchester with his partner and baby daughter later blamed his behaviour on a previous history of consuming drink and drugs.

Three days after the February 2 incident, Sale Sharks announced he was taking a ‘sabbatical’ from professional rugby for the ‘foreseeable future.’

The club cited a series of injuries he had suffered during his eight years at Sale – but made no mention of his arrest.

At Manchester magistrates court Jennings who signed for the club on his 16th birthday after playing for England at schoolboy level admitted assaulting an emergency worker and using threatening behaviour.

He faced up to 12 months jail under tougher new laws introduced to protect 999 workers such as police and paramedics but was ordered to complete 80 hours unpaid work, and pay the WPC £300 compensation. He was also ordered to pay the male officer £50.

Prosecuting, Nick Smart said: ‘These offences go back to February 2. Reports came in regarding an ongoing domestic dispute between the defendant and his partner. 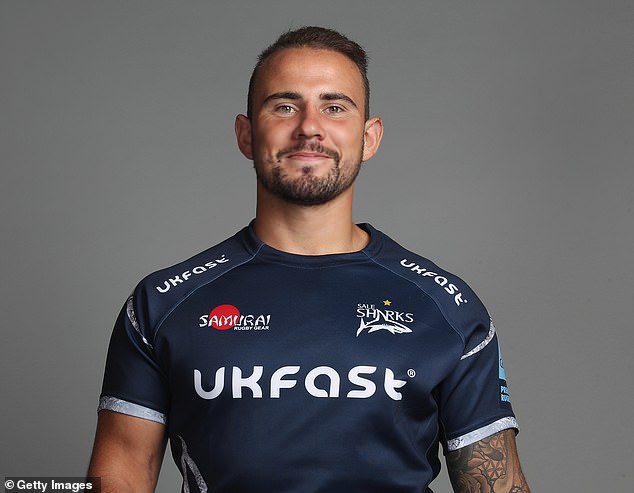 Three days after the February 2 incident, Sale Sharks announced he was taking a ‘sabbatical’ from professional rugby for the ‘foreseeable future.’ Pictured, Jennings in the squad photo for the 2018-2019 Premiership season

‘He said ‘do you know who I am, c***s?’ and then he told them to ‘f**k off and get out’. There was more industrial language like that used throughout. The officers tried to arrest him and he resisted. He lunged at a male officer, with his head and hit him in the chest.

‘He was restrained and put in the back of the police van and taken to the station. While waiting outside the station, he was locked in the van at the rear with other police officers.

He looked at the female officer and said to her ‘I am going to rape you.’ That comment made her feel awkward and she was fearful of what would happen.

‘He was spoken to by way of an interview and he gave no comment throughout. He has tried to break up with his partner on a number of occasions, and he has admitted that he has a problem with alcohol and drugs.

‘There were no injuries to the police officer, he just struck him on the chest. But the head is considered a weapon and the aggravating feature here is that the head was used.’

In mitigation defence lawyer Mark Haslam said: ‘This is a very sad case. My client has a history of issues involving alcohol and drugs. His position is, unequivocally, that he had been drinking, but he had not been taking drugs on that particular night.

‘He accepts that this behaviour was, ultimately, unacceptable. He behaved in a way that he would never behave in other circumstances.

‘He is embarrassed and remorseful and he apologises unreservedly to those who were the recipients of his behaviour. He understands the seriousness of this.

Sentencing Jennings to a 12 month community order, Magistrates Chair, Paul King, said: ‘The words you used and way you acted was not in any way acceptable. But we are mindful to go along with the probation report.’

Jennings has spent his rugby career with Sale, making 95 appearances but he has been troubled by injuries since making his debut in 2012. In 2013 he appeared in court and was conditionally discharged after being arrested for being drunk in Warrington town centre.

In February when the club announced his sabbatical he said: ‘I’d like to thank Sale Sharks for the opportunity and the understanding to allow me to fully recover away from the club and hopefully return once I am fully fit.’