Omicron and Delta may strike people at the same time and COMBINE to create an even worse Covid variant in the coming weeks, Moderna boss warns 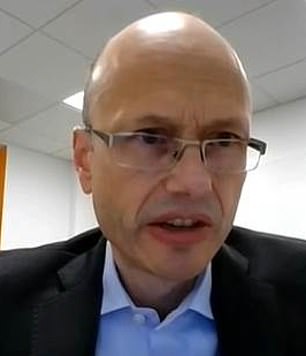 A new super-variant could be created if Omicron and Delta infect someone at the same time, one of Moderna’s bosses has warned.

Covid infections normally only involve one mutant strain, but in extremely rare cases two can strike at the same time.

If these also infect the same cell, they may be able to swap DNA and make a new version of the virus.

He told MPs on the Science and Technology Committee that it was ‘certainly’ possible they could swap genes and trigger an even more dangerous variant.

Researchers have warned that these events, scientifically called ‘recombination events’, are possible but they require very specific conditions and the coincidence of mostly uncontrollable events.

Only three Covid strains created by viruses swapping genes have ever been recorded, with the virus instead mostly relying on random mutations to make more variants.

A new variant was not triggered over the two months when the Delta strain was outcompeting Alpha through this method.

Omicron is already dominant in London just two weeks after being spotted in the country, and experts estimate it will be the main strain by the New Year. 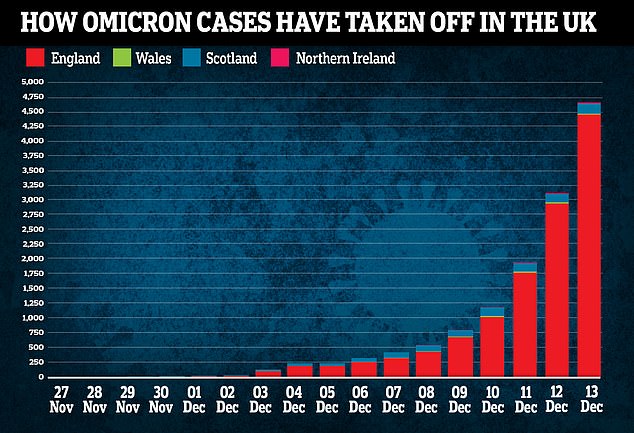 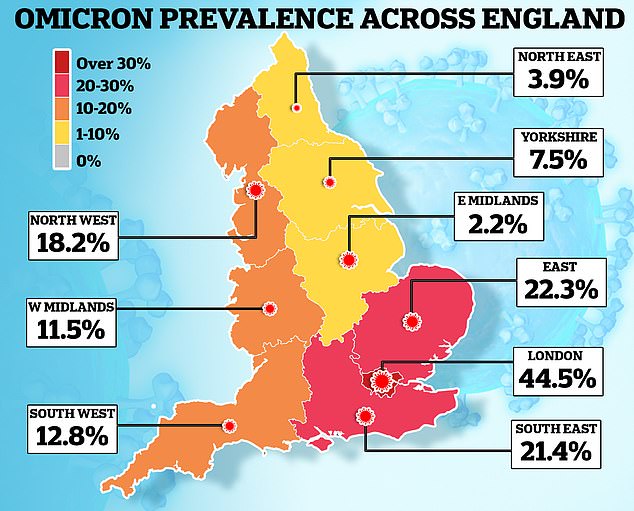 Dr Burton told the Commons that having the two variants circulating together raised the risk of them swapping genes and making a new variant.

He said: ‘There’s certainly data, there have been some papers published again from South Africa earlier from the pandemic when people — and certainly immunocompromised people — can harbour both viruses.

‘That would be possible here, particularly given the number of infections that we were seeing.’

For a combined variant of the virus to emerge, one person must be infected with two strains of the coronavirus – likely from two separate sources – at the same time, and then the viruses must bump into each other inside the body.

Once the viruses are inside the body, the way they spread is by forcing human cells to make more of them.

The coronavirus is made up of genetic material called RNA and, to reproduce, it must force the body to read this RNA and make exact copies of it.

There are inevitably errors when this happens because it happens so fast and so often and natural processes are imperfect.

If two viruses are in the same place at once, both being duplicated by the same cells, there is a chance the RNA genes could be mixed up, just as there could be a mix-up if someone dropped two packs of cards at once and picked them all up.

Most places have dominant variants of the virus so someone getting infected with two is unlikely to begin with.

And, for healthy people, there is likely only a window of around two weeks before the body starts to develop immunity and successfully clear out the first version of the virus.

This risk window could be cut to days for the majority of people who develop Covid symptoms  – which takes an average of five days – and then stay at home sick.

But huge, poorly controlled outbreaks like the ones in the UK and US over the winter, significantly raise the risk of the combination events simply because the number of infections is higher.

Asked whether this may lead to a more dangerous variant, he said it ‘certainly could’.

Most places have dominant variants so getting infected with two strains at the same time is unlikely.

And, for healthy people, there is thought to only be a window of around two weeks from one infection being triggered before the body starts to develop immunity and successfully clears out the first version.

However, huge and uncontrolled outbreaks like the ones in the UK and US last winter do raise the risk of recombination events simply because the number of infections is higher.

Britain currently has 4,713 Omicron cases confirmed to date, and the variant is behind about one in five cases nationally.

Scientists have told MailOnline that it is possible for two versions of the virus to swap genes, but that it is not likely to happen.

There have been three variants triggered by two others merging recorded to date.

But none have led to a large outbreak, or a more dangerous version of the virus emerging.

In one case a recombination event occurred in the UK when the Alpha variant merged with B.1.177, which first emerged in Spain, in late January.

It led to 44 cases before eventually disappearing.

Scientists in California said they had identified another recombination variant in early February, with the Kent strain merging with B.1.429 which was first spotted in the area.

These happen when the virus makes copies of itself, and errors appear in its genes.

In most cases these changes are harmless, but occasionally they can trigger an advantage such as being more transmissible or better able to evade vaccines.

It is thought that the Omicron variant emerged in a lingering infection in an immunocompromised person. This allowed the virus to mutate several times to train itself to be better at infecting humans and evading previous immunity.