My good friend Laurie Levy, campaign director at the Coalition Against Duck Shooting, recently celebrated his 80th birthday on Zoom, but I couldn’t make it.

I was saddened by this, for he has been a friend since childhood and a man who has dedicated himself to his cause, been consumed by it in fact, for 35 years. 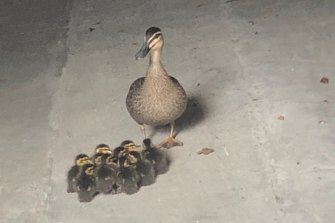 On the day, the weekend in which Melbourne was released from its interminable lockdown, I went to pick up my sister. As we were about to drive off, a woman appeared to my right. Waving for her to pass, it became clear she was trying to alert me to something in front.

Jumping out of the car on Domain Road, I discovered a mother duck with a line of 10 ducklings in tow. They’d clearly strayed from the nearby Botanic Gardens. My sister and I realised we needed to escort them home.

Thus commenced a nerve-wracking adventure. This mother and her waddling entourage were not cut out for busy roads and high ledges. Cars whizzed by just metres away, the drivers unaware of the high-stakes drama.

Of all their wrong turns and dead ends, the most excruciating was when we watched four tiny ducklings disappear down a storm-water drain. Desperate quacks added to the sense of doom as we fought in vain to reach them. 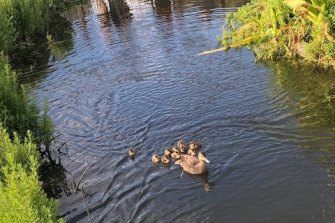 Finally they were reunited in their Botanic Gardens home.Credit:Janine Joseph

Keeping track of the rest of the family took the full force of six strangers we’d recruited along the way; a growing throng, rallying for the cause. Words were few, but we bonded spontaneously as we followed our instincts to steer the family from harm’s way.

One hour and several crises later, including several missing ducklings, a calm volunteer from Wildlife Victoria came to their – and our – rescue. Miraculously, the volunteer, Josh, found every last duckling, whom he put at a week old.

My sister, a neighbour and I joined Josh at the Gardens and watched as he gently and lovingly moved each duckling from his rescue box into the lake where they were reunited with the rest of the family. It was a blissful moment.

What a joy to be united with strangers in an act of kindness after these dark months. I may have missed his birthday, but Laurie was very proud.

Janine Joseph is a Melbourne writer.