Anything you can do! Dynamic dog shows off her gymnastic skills by mimicking owner’s wall stand exercise

A dedicated dog showed off her incredible gymnastic skills after joining her owner for a workout at the gym.

A gym in San Jose, California, welcomed a peculiar guest when a dog named Tesla arrived to exercise alongside her owner Timea Kosztin. 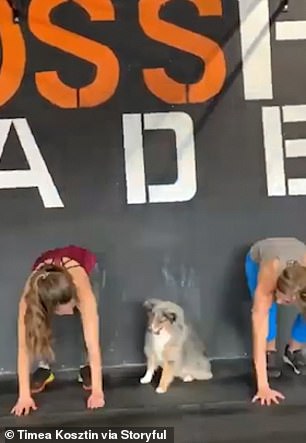 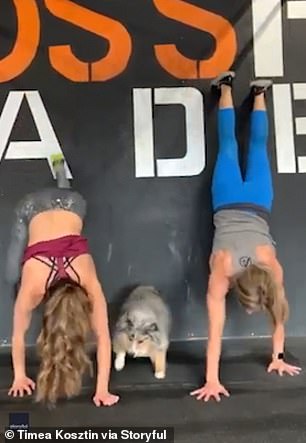 Miniature Australian shepherd Tesla joined her owner Timea Kosztin, and another gym-goer, for a workout at a gym in San Jose, California

In the video, seven-year-old Tesla joins her owner and another gym-goer in doing handstands against a wall, obeying Timea’s command to ‘reverse’ by raising her legs in the air behind her.

Amazingly, Tesla effortlessly swings her hind legs up on the wall and joins the two gym-goers in stepping backwards to get closer to the wall.

Timea can be heard telling the talented dog to ‘hold it’ as she nails the perfect doggy handstand.

The obedient pooch keeps her position until her owner gives her the go-ahead to drop. 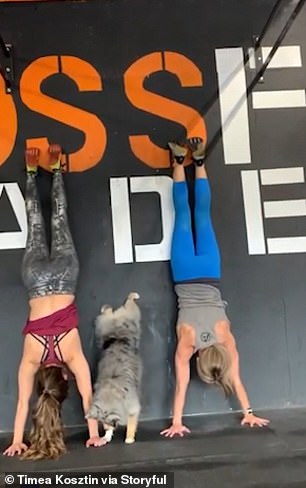 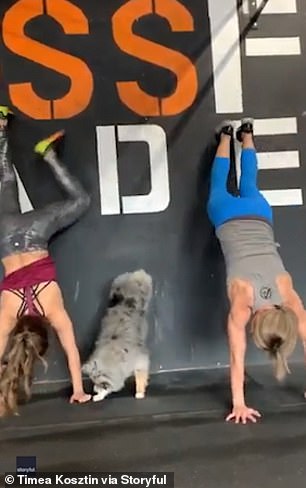 Seven-year-old Tesla perfectly nails a handstand alongside her owner Timea, who says her gymnastic dog often joins her at the gym for workouts – and even for exercise classes

Tesla often joins her owner for her regular workouts, and Timea has shared multiple videos showing off her dog’s athletic ability on her Instagram page.

Tesla has even joined her owner doing burpees during a communal CrossFit exercise class, much to the surprise of the other participants.

Timea also owns another miniature Australian shepherd called Tycho, who was only born on April 13 this year.

Her Instagram account, which Timea dedicates to her two athletic dogs, has more than 60,000 followers and shares tutorials for Tesla’s gymnastic tricks.

The impressive video footage was captured earlier this year, on January 26.